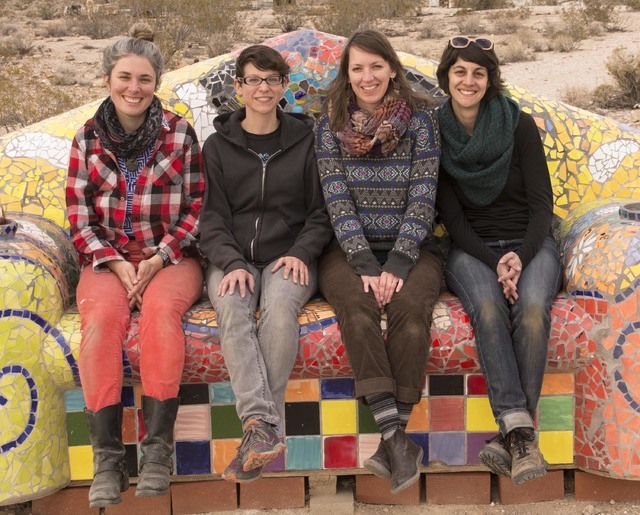 RHYOLITE — The latest Goldwell artist residency was more of an artist encampment as four artists from various parts of the country united to see what their shared artistic skills and visions would produce.

The four — Megan Berner, Jill Baker, Nicole Donnelly, and Jennifer Nagle Myers — originally met and collaborated while working on their Master of Fine Arts degrees at the University of Iowa. Donnelly was in the painting and drawing program and the other three in interdisciplinary media, which embraces non-traditional media such as installation and performance art.

“There was a really collaborative spirit when we were at Iowa,” said Nagle Myers, but five years had gone by since they had been together.

“We needed to find a way to reconnect,” said Berner, who teaches at the University of Nevada, Reno. “Since I’m from Nevada, I’d heard about this place and I think I had met Suzanne (Goldwell Executive Director Suzanne Hackett Morgan) at an Art Council meeting. So when we were talking about getting together, I thought about this space (the Red Barn Art Center at Rhyolite).”

“One of our goals,” said Baker, “was to come up with at least one piece we’ve done together. It’s a four-channel video piece.” Each artist worked to produce a video, and the four are meant to be shown simultaneously on four separate screens.

Members of the group also did some drawing and painting while at the Red Barn, and they also experimented with cyanotype, a photographic process with which they produced what are called “sun prints.” They also collected a number of small found objects from the desert that inspired them artistically.

Baker, who is also a paper maker, experimented with covering desert rocks with paper and applying pastel or charcoal.

“A lot of what we’ve done has just been a starting,” says Berner. “It has been hugely inspiring … this space, this amount of time, bouncing ideas off each other.”

Nagle Myers said it was an “incredible opportunity” in a “phenomenal space.”

The group expressed gratitude for the unrestricted artistic freedom they were given by Goldwell and that the organization had respected them as artists.