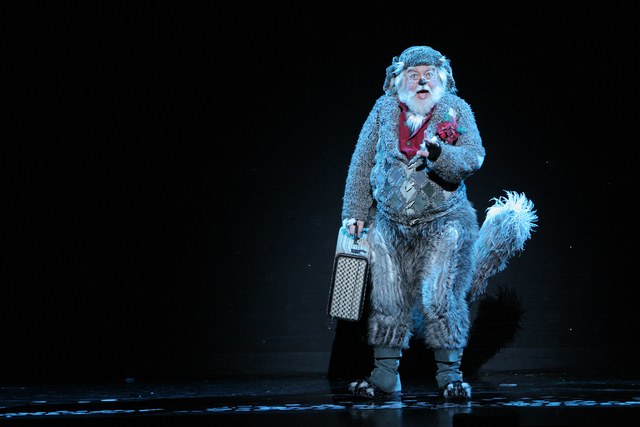 Bob Lauder Jr. portraying Old Max in a national tour of “Dr. Seuss’ HOW THE GRINCH STOLE CHRISTMAS! The Musical.” Courtesy of PaparazziByAppointment.com 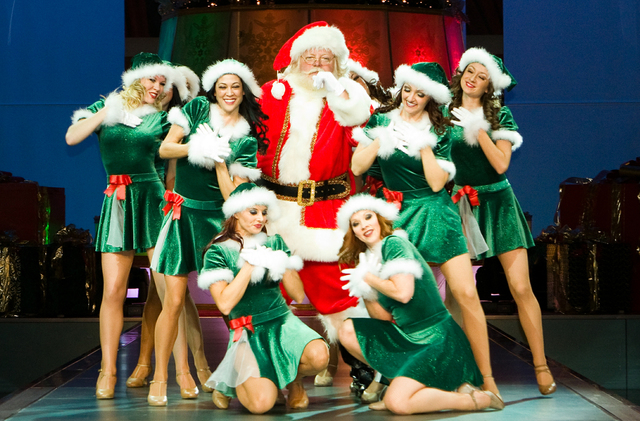 Santa Bob and his elves: Actor Bob Lauder Jr. as Santa Claus from the “Believe In The Magic” Christmas show at the Fashion Show Mall in Las Vegas. Bob Lauder Jr./Special to the Pahrump Valley Times 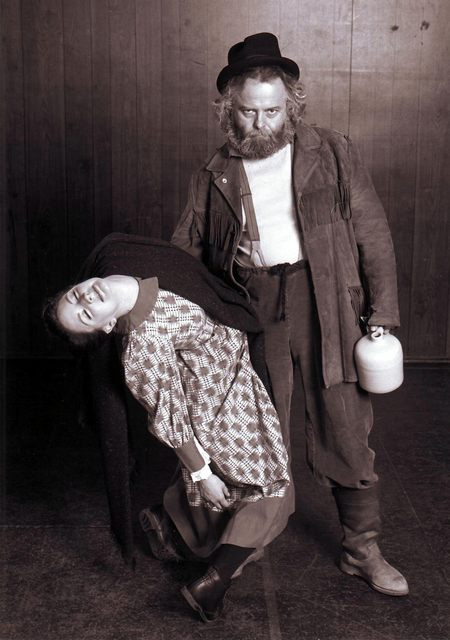 Ben and Elizabeth in “Paint Your Wagon” portrayed by Bob Lauder Jr. and wife, Patti Diamond at the Fullerton Civic Light Opera. Diamond’s “Divas On A Dime” food and recipe column appears each Friday in the Pahrump Valley Times. Courtesy of Bob Lauder Jr.

Bob Lauder Jr. of Pahrump is decked out in holiday attire a bit different from most this time of year.

He wears a multi-layered mock dog suit, with a six-foot tail made out of marabou feathers, foam pods to enhance his thighs, a hat, and big dog shoes. A befitting outfit for his role as Old Max, the dog, as one of the leading stars in “Dr. Seuss’ HOW THE GRINCH STOLE CHRISTMAS! The Musical”, adapted from the children’s classic book by the same title written by Theodor Geisel (Dr. Seuss).

Lauder is marking his seventh season in the role performing with a national theater touring company, Big League Productions, based in New York City.

Lauder said he loves the role of Old Max, who narrates the story, which is very different from the Jim Carrey movie version of the Grinch.

The musical opens with Old Max carrying a suitcase coming on stage in the dark, trudging up Mount Crumpit implying that he is passing to the next existence since he is over 80 in dog years. He hears the Whos singing, wags his big tail and reminisces about years gone by.

He relates the story to the audience on how he remembers hearing the singing every December, and how the nasty, old Grinch, who always hated Christmas, set out to ruin it for the residents of Who-ville.

The Grinch, disguised in a makeshift Santa outfit, strapped antlers on the scared dog to pull a sleigh down the mountain, steal the Whos’ Christmas stuff and throw it off the top of the mountain.

The tables get turned on the Grinch when he sees the Whos celebrating despite his vicious act, and he comes to realize the true meaning of Christmas is not based on having material things, but being with family and friends.

In addition to being the narrator, Lauder also dances with his big giant dog paws and sings the classic “You’re a Mean One, Mr. Grinch”.

“I love that song anyway and Thurl Ravenscroft, who sang it originally, he’s my idol.”

Lauder said many people think Boris Karloff was the original singer of the song in the televised cartoon version of “How the Grinch Stole Christmas,” but he was the narrator.

The musical has been performed in over 40 cities across the country, and Lauder would like to see it staged in Las Vegas at the Smith Center. He said it would be so good there since it is a secular show and many people can identify with the story.

Lauder said it is not a “kiddy-show” even though Warner Bros. did the original cartoon back in the 1960s, but it is for everyone.

“It’s like a Warner Brothers cartoon; there are all these levels of slapstick, but then there are jokes that go right over the kids’ heads and are meant for adults, and they are topical, and the Grinch makes comments that the kids don’t get,” Lauder said. “There’s other stuff that’s more cerebral that’s funny to the adults, but not the kids.”

“We have people in their 90s coming to see the show and loving it,” Lauder said, referring to a letter from a fan in Cincinnati a few years ago. The man took his elderly, ill wife to see the show and she loved it. The woman passed away a few days later.The husband wrote the letter thanking the cast for bringing so much joy to her.

Lauder has performed in Christmas shows in Vegas, including a singing and dancing Santa Claus in “Believe in the Magic” in 2008 and 2009 at the Fashion Show Mall, and as Santa while making private appearances at The Villas at the Bellagio Hotel.

Born and raised in the Anaheim area of Southern California, Lauder had no idea that his full-time profession would be performing in theater and musical theater.

When he was in seventh grade, he sang bass in the church choir and played the trumpet in the band at Anaheim High School.

He did a few bit parts in theater in high school, including the role of a dancing waiter in “Hello Dolly,” which he did not take very seriously.

When he entered Fullerton College, he was focused on becoming an optometrist and taking pre-med courses. Toward the end of his second year, Lauder was offered a role as an extra in Shakespeare’s “Taming of the Shrew,” which he thought would be fun.

“So, I went and got in the show, and (acting bug) bit me, and I couldn’t stop doing shows,” Lauder said.

He switched his major and started taking theater courses to complete his degree.

Lauder’s theatrical career continued to grow as he got roles performing at civic light operas and other regional theaters.

Lauder also pursued his interest in opera by studying under the late Dr. Hans Lampl at California State University, Long Beach. He also and had studied with his late father, Robert Lauder Sr., an opera singer, who was training for the Metropolitan Opera, but enlisted in the military at the start of World War II.

Lauder took master classes with some well-known opera singers and studied under the late Martial Singher, a Metropolitan Opera singer. After one year, Lauder was ready for the prestigious Music Academy of the West in Santa Barbara where he spent three summers performing lead roles in “La Bohéme”, “Falstaff” and “A Midsummer Night’s Dream.”

Other roles in which he has performed include Hajj the Poet in “Kismet” at the Music Theatre of Southern California; the Cowardly Lion in “The Wizard of Oz” at the same theater; Archie Beaton in “Brigadoon” at the Sacramento Music Circus and Isaac Welles in “Utah! America’s Most Spectacular Outdoor Musical” at the Tuacahn Amphitheater, St. George, Utah; just to mention several of his achievements.

His resume outlines an extensive list of additional productions in which he appeared, including film, television, and work in music recordings.

The love of performing has been such a vital part of Lauder’s life, even to finding the love of his life and future wife.

Lauder played Jud Fry, the so-called “ bad guy,” in the musical “Oklahoma!” in multiple theaters all over Southern California, while studying opera.

In the late 1980s, he was called to Portland, Oregon and captured the romantic male lead as Curly McLain in “Oklahoma!” acting opposite the female lead, Laurey Williams, played by Patti Diamond at the Portland Civic Theatre.

It was a prophetic casting call which led to the couple falling in love, getting engaged and eventually marrying. They have been together happily for over 26 years, living in Pahrump for the last 10.

Diamond is known to readers of Pahrump Valley Times for her “Divas On A Dime” food and recipe column featured on Fridays in the paper, in addition to her website and blog www.divasonadime.com.

The couple has performed together in a boatload of productions. For six years before the birth of their first son, they sailed around the world performing on cruise ships, writing and producing most of their own shows.

They also starred together in “Titanic, A New Musical” during its first national tour, “I Do! I Do!”, and as Ben and Elizabeth in “Paint Your Wagon.”

“We counted once a couple of years ago, between the two of us, put together, we’ve done over 400 productions,” Diamond said. “Not performances, but productions.”

Since they have different last names, Diamond and Lauder have been cast in several productions as husband and wife.

Diamond semi-retired from a full-time theatrical schedule 12 years ago to raise their youngest son.

She doesn’t miss being on tour, going to auditions, the critiquing and the competing.

“I do miss the shows. Mainly what I miss is the creative collaboration with these wonderfully talented people,” Diamond said. “I miss that, the energy in the room when something is being created, and I miss the laughter of being, again, with these enormously creative, fun people.

Diamond said she has been working professionally since she was 11 years old, starting dance lessons when she was 3 years old, and added that her husband did not really start his performing career until he was in college.

“Just feeling the energy between the audience and the cast. And it just starts to flow; that is amazing. That I miss,” Diamond added.

For more information on Lauder’s performance in “Dr. Seuss’ HOW THE GRINCH STOLE CHRISTMAS ! The Musical”, check out the website www.GrinchMusical.com.