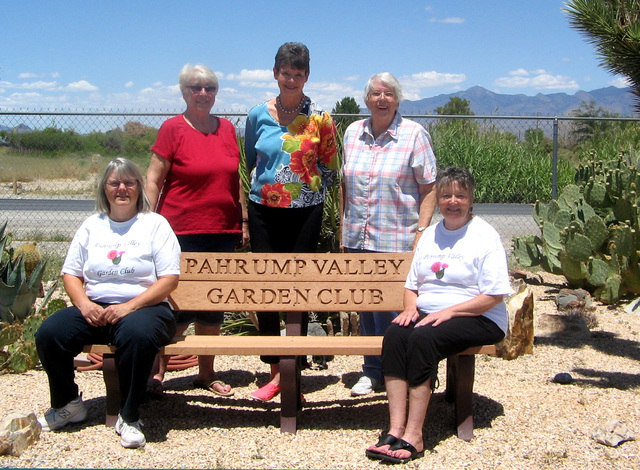 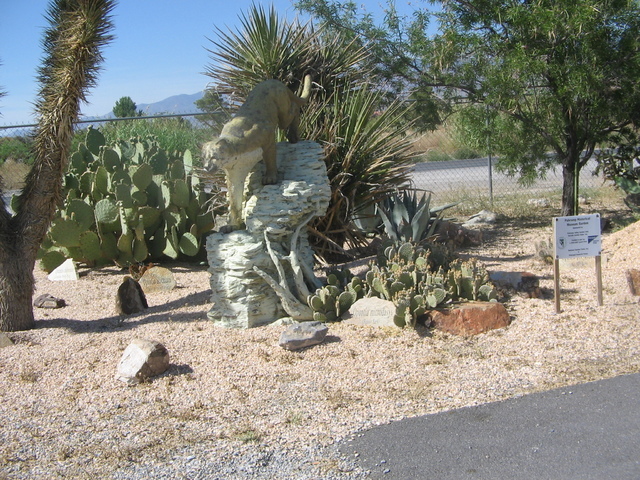 The Pahrump Valley Garden Club maintains the cactus garden and cotton patch on the grounds Pahrump Valley Museum and Historical Society at 401 E. Basin Ave. The club meets there the second Saturday of the month, except August and December, at 10 a.m. Brenda M. Klinger/Special to the Pahrump Valley Times

One of the valleys older gatherings of horticulturists are looking to (pun coming) grow.

The Pahrump Valley Garden Clubs roots (sorry) date back to May 1, 1995 when a small core group of gardeners gathered in the University of Nevada Cooperative Extension Office on East Calvada Boulevard.

Over the years the club expanded its activities and programs and moved the meetings to the Pahrump Valley Museum.

Were basically a group of gardening enthusiasts and we call ourselves the garden club because as you can see from the plants a lot of people have different interests, President Sandy Nelson said. Some people are really into vegetable gardening, some people are into landscape gardening, flower gardening, fruit trees, just kind of a hodgepodge. 

Every meeting has a question-and-answer session for anyone with a plant or garden issue, along with a presentation on a gardening topic. The meetings sometimes include a show and tell where members bring in plants to share with others.

No ones an expert, you know, were not the Master Gardeners, but we do try to do some research, Nelson said.

Carla Stevenson has been a garden club member since she moved to Pahrump in the 90s and served as president for three years. Her late husband Walt was also an active member in the early years.

Stevenson said the former club meetings,with about 8-12 people, were mostly social gatherings with little organization, but that has changed over the years with new members and leaders.

In 2007, Stevenson felt the club needed an activity or a purpose and suggested starting a landscape tour. She had been on some with her late sister in northern California and really enjoyed them.

The club tapped Stevenson to be the organizer of the first landscape tour, which has become quite popular and is still going strong according to Stevenson. The 10th annual tour for the club was held in April.

Im so happy because all these younger people came in and picked up and made it better, Stevenson added.

Every spring a committee selects five or six gardens of special interest or uniqueness in Pahrump. Participants are given maps for the self-guided tour to visit the gardens.

I basically tell the homeowners your job is to have fun and brag about your yard, Nelson stated.

Treasurer Marcia Newyear joined the club soon after she and husband Bill moved to Pahrump almost four years ago from Southern California. She attended a club meeting since her yard had absolutely no landscaping and turned to the club for help and advice.

Newyear described the club meetings as fantastic in helping her learn about the desert terrain and gardening.

You know just any amount of information that you can get anywhere is a big help, Newyear said. Whether its the extension (office) or the garden club or anything is just a real big help. Because it is really tough here.

Marilyn Short, correspondence secretary, became a member two years ago after living in Las Vegas. She observed that plants which thrived there dont necessarily do well in Pahrump, mentioning recent problems with her red Mexican bird of paradise plants.

So, I had a lot of questions in coming here and I got answers, Short said. Many of the questions that were asked I said, oh, I needed to ask that and have answers from two or three people. Like how do you get rid of slugs here, some use poison, others use cans of beer and, you know, there are all different kinds of answers, Short stated.

Pahrump is a melting pot of people from everywhere, Stevenson said. And I think thats one of the important things we do is try to convince people that we can do things that are appropriate in the desert. That it isnt appropriate to come here and plant five acres of lawn. You know, you can grow almost anything as long as you put water to it and fertilizer to it.

The first meeting Ufheil attended featured a presentation on garlic and she liked what she saw: short meetings, everybody was pleasant and a raffle where everybody got a prize.

Everybody has a common interest, everybody smiles, works for me; we meet once a month, Im there, Ufheil said.

The club is always looking to add new members to its roster and residents can learn so much about any garden concerns.

Ufheil also likes the camaraderie of the club.

If anybody comes to this meeting, it seems, even if its not a member and they have a problem, an issue, a garden issue, everybody just jumps in to help and I think thats really the spirit of the group.

Annual membership dues are $12 for a single person or $21 for a couple. The dues and proceeds from the landscape tour tickets are used by the club to help fund various projects.

They recently gave $500 to Nevada Garden Clubs, Inc. in Las Vegas toward a scholarship program for a student majoring in horticulture attending a Nevada college. Theyve also donated money to the Disabled American Veterans and Penny Pines, a program affiliated with the U.S. Forest Service where trees are purchased and planted to refurbish burned-out forests in areas between California and Nevada. So far, the club has donated funds for the purchase of over 200 trees.

Additionally, the club purchased a bench for the cactus garden and cotton patch, which they maintain on the grounds of the Pahrump Valley Museum and Historical Society and another for the demonstration garden at the University of Nevada Cooperative Extension Office.

If you have dirt, you want to join, Short said.

These garden gurus meet the second Saturday of the month, except August and December, at 10:00 a.m. at the Pahrump Valley Museum and Historical Society, 401 E. Basin Ave. For more information call Sandy Nelson at 775-537-1393.