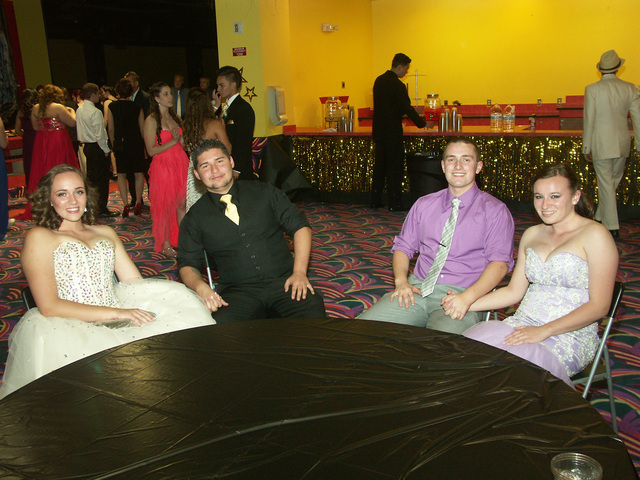 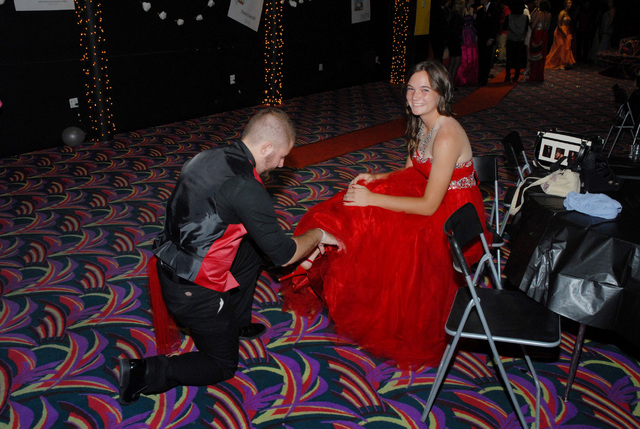 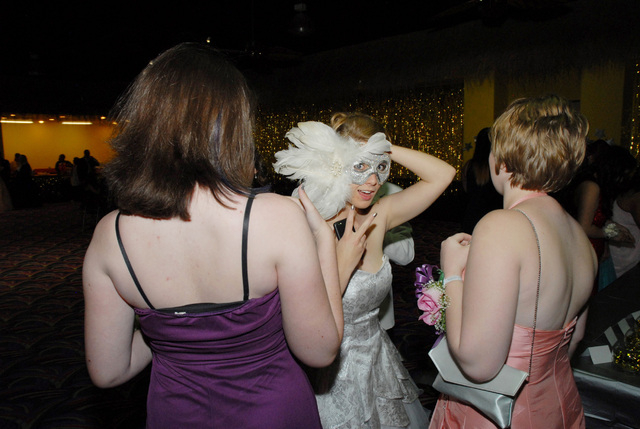 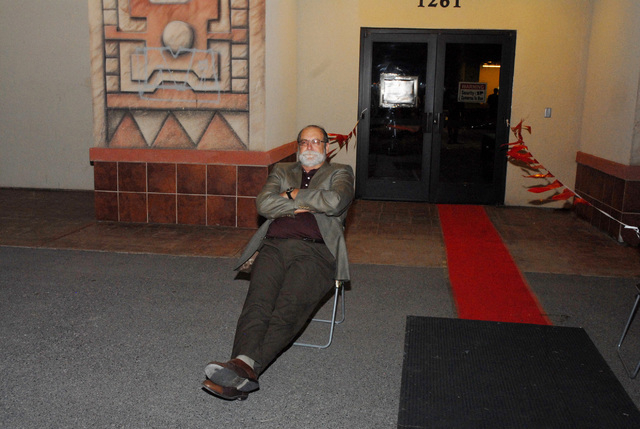 ahrump’s former Skate Zone was awash in glitz and glamour this past Saturday as the 2014 Pahrump Valley High School (PVHS) Prom took students back to the period known as the “Roaring 20’s.”

The Great Gatsby themed gala drew close to 300 students to the final party of the school year as summer break approaches.

She also shared her feelings about the brand new venue and all of the work that went into decorating the interior.

“We sold 294 tickets and 290 students showed up for the Junior/Senior prom. It was absolutely beautiful and was one of the best we have had in the last few years and I have been to all of them, she said.

“It did not look at all like the former Skate Zone. Lisa Holleman from Pahrump Party Supply helped out with some of the decorations. The prom committee’s work was just amazing with all of their decorations.”

Earlier this year PVHS juniors and seniors immersed themselves in the culture of the 1920’s when they were assigned to read F. Scott Fitzgerald’s “The Great Gatsby.”

As a result, Saturday’s affair was akin to stepping back in time, where fashion statements such as Cloche Hats reminiscent of actress Louise Brooks were all the rage for ladies.

Students appeared to embrace the era.

Jones noted she was wearing a gown by designer Sherri Hill.

Both remarked on this year’s theme.

Jones was just as ebullient as her date, “I love it, I love it a lot, but there were no cell phones back then,” she said.

“There were a few other ideas we had for this year’s theme but I like this one. I think it’s a clever idea and it was a lot of fun tonight,” said Scott Perron, seated with his date Cassie Clark.

“The junior class did a really good job on this. We are really enjoying it,” she said.

He noted the theme fit nicely into what his students had previously been studying this year.

“It’s a wonderful theme because we had students studying the Great Gatsby in class and it tied in educationally with some of our curriculum. I understand we had close to 300 students here tonight, and it looks like they are all having a great time.

“We have about 30 members of our staff chaperoning. We invited our entire staff down because it’s one of the greatest nights of our school year and it’s a chance to see the kids in a different light all dressed up,” Buffi said.

“The junior class puts on the prom each year as a going-away treat for the seniors to enjoy. We really liked the venue this year because it is much larger. There have been some concerns in the past that the venue was too small. This year, we had a lot more space and options available so it was very nice,” she said.

Robbins also said the junior class had another prom theme in mind for this year but eventually settled on the 1920’s.

“We were going to go with an enchanted forest magical theme but we decided to change it because many of the seniors wanted to go with ‘The Great Gatsby.’ It really worked out well because it was very elegant and it appealed to everybody. It was very classy like the way we wanted it,” Robbins said.

PVHS English instructor Deanna Brill was also a key figure in the planning and preparation of this year’s prom.

“The students loved the theme this year. Most of the juniors and seniors read the novel in class, so it was very popular and prompted many to dress like the Roaring 20’s. The junior class raised money the last several months to host Prom away from school.

“We decided to try the old Skate Zone as it is close to school and a large building. It worked perfectly. Debbie, the owner, was fantastic to work with and very reasonable with her rental fee. I was very pleased at the turn-out and comments from students at school have been very positive. It was a true success,” she said.

Buffi, meanwhile, said the school is preparing for yet another annual event coming up next month — Graduation 2014.

“We have been gearing up to finish the school year as well as start the new school year. We are looking forward to commencement ceremonies once again,” he said.