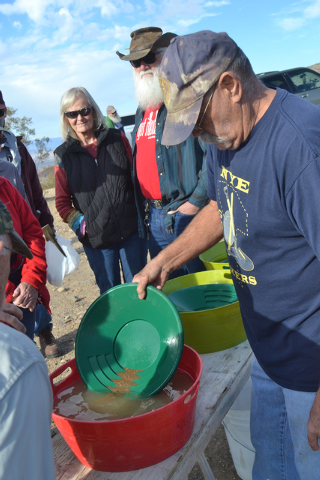 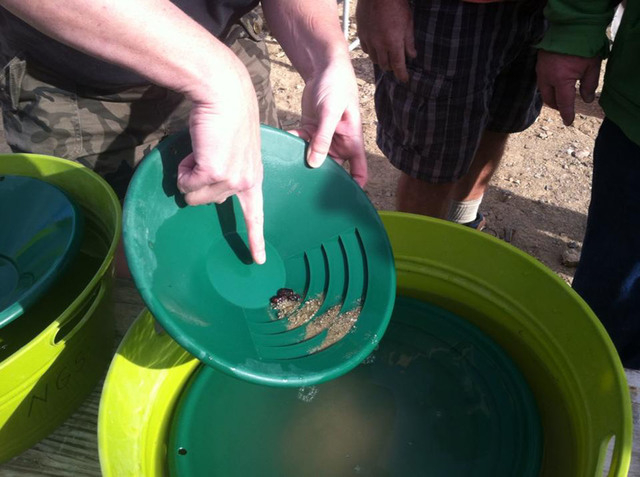 Prospecting for gold is an activity that is alive and well in Nye County; and that, according Nye Gold Seekers member Barkley Burker is because, “There is still gold in these hills.”

Burker and fellow prospectors venture to various staked claims throughout Nye County at least once a month to placer mine. The nonprofit club has staked a 40-acre claim on BLM managed lands at the site of the former Johnnie Mine, north of Pahrump.

The club is dedicated to preserving the history of mining and the area, by teaching surface mining techniques in the classroom and in the desert in a way that preserves and protects the environment.

Club members agree that none of them have gotten rich prospecting, but buried treasure remains beneath the desert sand.

That treasure is not just gold. Club members have also unearthed silver, minerals and gemstones. Lucky and dedicated prospectors have discovered pockets of gold nuggets on various outings, though most uncover gold “flakes.”

President Larry Tobey said gold is 19-times heavier than sand, and gives advice as to where to begin a “dig.” “Look for gullies and don’t be discouraged by the leftovers from a previous dig,” he said. Rain and wind erosion can help to expose gold by moving nearby sand and gold itself.

Members suggest picking over a “tailings” or discard pile from an abandoned commercial operation and to keep an eye out for quartz deposits. “Gold follows quartz and black sand and gold are found together,” Griz revealed of terrain likely to reveal the treasure.

He cautions prospectors not to get too excited because fool’s gold, or iron pyrite, are often found in those same location and mistaken for gold.

He revealed that it is difficult to see gold with the naked eye and that is why the club provides the equipment to set up a panning station on their monthly scheduled outing.

The club seeks new members to add to its 160 active membership list. Prospectors will not get rich with gold they said, but they will be rewarded by enjoying the outdoors, physical activity. camaraderie and the knowledge of experienced prospectors.

There is not a typical age range, club members say, as young children scour the desert for gold alongside senior citizens.

Money raised by annual dues is used to purchase equipment for member use, host informational seminars, improve access roads to tailings piles and all other activities of the club.

Members are permitted to use the equipment for two-week increments to prospect on their own.

For more information visit www.nyegoldseekers.webs.com or contact president Larry Tobey via email at nyegoldseeker@gmail.com or by phone at 775-410-0379.