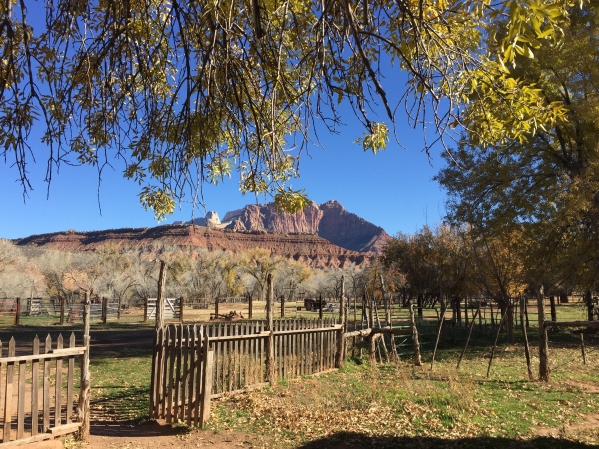 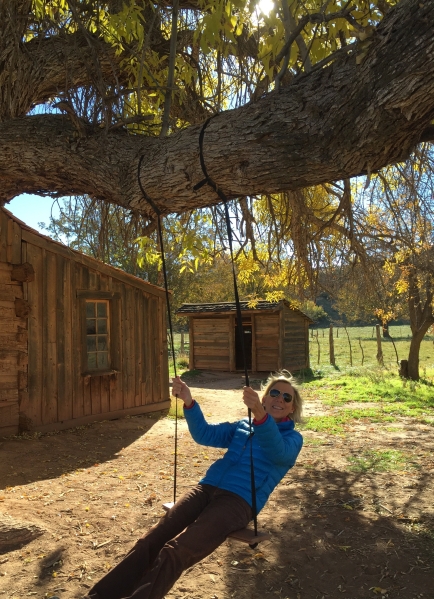 Grafton, Utah offers one of those sweet visual experiences that decorate a traveler’s memory like so many ornaments on a Christmas tree. Now on the National Register of Historic Places, this ghost town is better preserved than most. Not quite big enough or developed enough to be a destination in its own right, it makes an excellent side trip if you are visiting Zion National Park or some other place in Southern Utah. Grafton is only 20 minutes from the park, so the signature sandstone formations of Zion constitute the dramatic backdrop to its bucolic setting of pastures and orchards.

Your tour of the town will be self-guided, for the place is so uncrowded yours will probably be the only party there.

If you have a sense of deja vu when you arrive, think back to the 1969 film “Butch Cassidy And The Sundance Kid,” and you will recognize the setting for one of its most famous scenes. The scene featured Butch Cassidy (Paul Newman) flirting and showing off his bicycle tricks with Sundance’s girlfriend, Etta Place (Katherine Ross). They ride around on a bicycle as the soundtrack plays “Raindrops Keep Falling On My Head.” The film won four Oscars.

If you remember the scene you might picture an old schoolhouse, barn and fruit orchard on a tree-lined gravel country road. Today it looks very much the same as it did when it was filmed more than 45 years ago. Other films shot here include “Child Bride of Short Creek,” in 1981 and “The Arizona Kid,” in 1930.

The town of Grafton was first settled by Mormon pioneers in 1861 and originally located one mile downstream from its current location. An intense flash flood in 1862 destroyed almost the entire town, so the townspeople moved upstream that year, to its current site. Flooding was still a problem (as it is to this day, anywhere along the banks of the Virgin River). And when they didn’t have too much water, they often had too little to grow their crops.

A visit to the Grafton Cemetery will definitely make you realize how tough — and short — life could be in early Grafton. The cemetery was used from 1862 to 1924, but 1866 seemed to have been an especially harsh year. In that year alone the little town buried six victims of diphtheria, two of scarlet fever, two of a freak accident, one whose cause of death is lost to history, and three killed by Navajo raiders.

Many headstones are gravesites of children. One prominent headstone memorializes two brothers named Berry, and one of their wives. The inscription says they were “killed by Indians” in April of 1866. They hailed from Berryville, (now Glendale, Utah) but were buried here at Grafton because at the time it was the county seat. It is thought that the Grafton Cemetery holds 74-84 graves, although many headstones are missing.

The Grafton Schoolhouse/church building was built in 1886. It is a two-story building made from rustic adobe on a foundation of lava rocks. The final classes were held here in the 1918-1919 school year, with only nine students attending.

By 1906, most of Grafton’s residents moved downstream about 20 miles to current-day Hurricane, Utah which was receiving water from the newly dug Hurricane Canal. The canal diverted water from the Virgin River for irrigation purposes. By 1945, not one resident remained in Grafton.

The Grafton Heritage Partnership Project has undertaken responsibility for keeping Grafton from being forgotten, or becoming a pile of picked-over rubble, as has been the fate of many or most of the West’s ghost towns. The project has raised more than $1 million, has bought and restored the Grafton Schoolhouse and the Russell home, besides installing interpretive signs and fencing to keep the town in good shape. If you’re interested in their efforts, contact them at (435) 635-2133 or www.graftonheritage.org/

From Pahrump, take NV-160 south for about 52 miles to Las Vegas.

Merge onto I-15 north and drive for about 135 miles (passing through Arizona) to Utah Route 9 (Exit 16- Hurricane/Zion National Park).

Cross over the Virgin River using the one-lane bridge and follow the road for about 3.5 miles, staying right when in doubt, until it dead ends.

The route is paved at the beginning then becomes a well-maintained gravel road, suitable for most passenger vehicles except after or during rain or snow.