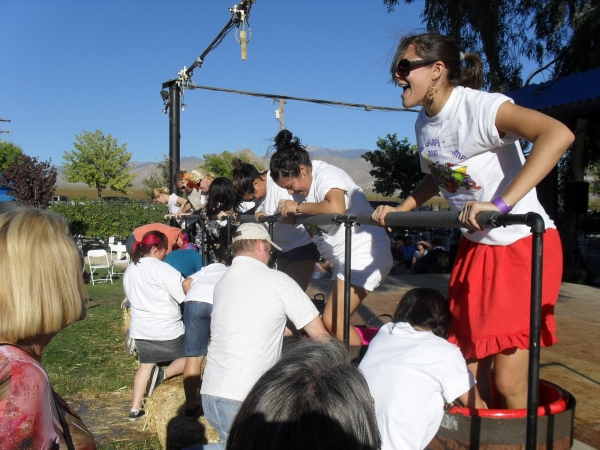 It’s almost that time of year to get ready to get those shoes dirty as the Grape Stomp returns next month.

“It’s a two-day party and besides live music, food and wine tasting, we also have the Grape Stomp competition,” said Bill Loken, owner of Pahrump Valley Winery. “We will have about 80 teams per day compete to see who can stomp the most juice out of a bucket of grapes in two minutes.”

The competition is filled for Saturday, but there still are spots open for Sunday’s round of grape stomping.

The cost to enter the event is $50, which includes admission to the event, a souvenir certificate and a T-shirt for both competitors.

Loken explained that the event is set up for those to enjoy themselves, sometimes at the expense of others.

“It’s basically an excuse for people to come out and eat too much, drink too much and make a fool of themselves,” Loken said.

Both days there are four time slots for contestants to to enter, noon, 1 p.m., 2 p.m. and 3 p.m. All competitors must sign in 30 minutes prior to their start time.

One person will be in the barrel stomping while their teammate will be outside the barrel collecting the juice as it’s produced. The stomper and the partner may change positions as needed.

Each team has exactly two minutes to produce the most juice possible and any team stomping after time is up will be disqualified.

The winners will be determined by the volume of juice they produce and awards will be given to first, second and third place finishers.

those who don’t perform so well can still win with an award for works stomper up for grabs as well.

Those who don’t want to take part in the contest can still attend the event and enjoy food, drink and entertainment by purchasing general admission tickets. Presale tickets go for $7 until Oct.1 and tickets at the gates will cost attendees $10.

Although children are permitted at the event when accompanied by an adult, there are no children’s activities planned as the stomp is geared more toward adults.

Loken said that the event has gotten bigger each year since its inception 20-plus years ago with a lot of attendees coming from over the hump.

Those that make the trip to town from Las Vegas are coming with very little done to promote the event officially there.

“We do very little advertising, it’s been more of a word-of-mouth type of thing,” Loken said. “The event has grown each year and it’s just the word-of-mouth and it just keeps spreading.”

Loken hopes for many local residents to come down, as he said it is a great way to bring all who call Pahrump home into one space for a good time.

“It’s just a great thing for the community to all get together for an afternoon of fun and frolic,” he said.

Intersted stompers can sign up ahead of time by going to www.nvcellars.com for sign-up forms or by calling 775-751-7800.