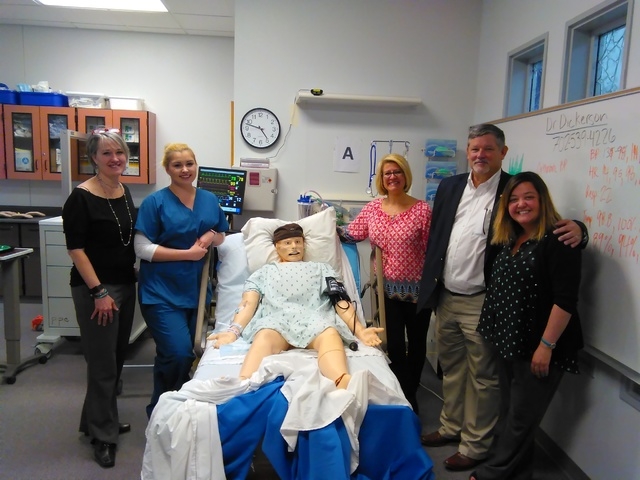 Patient Kenneth Bronson was having a very bad day on Monday.

Fortunately, a team of nurses sprang into action and managed to save his life. The nurses were faculty members from Great Basin College’s augmented nursing program.

The college received a $2.2 million grant, funding simulation equipment for the nursing lab, along with faculty at the Pahrump campus.

“We do synchronized learning, so all of the instruction comes out of Elko, Nevada,” she said. “Our students interact with Elko and Winnemucca students for all of their learning. This type of program really works well in small communities.”

Bronson, or “SimMan,” as faculty members refer, is a state-of-the-art teaching tool for nursing students.

Great Basin College Nursing Instructor Barbara Conton said he can be programmed to simulate any known disease or ailment for nursing students to diagnose and treat.

“He has sensors everywhere and he can be resuscitated,” Conton said. “He can have a seizure or any type ailment that we can think of. The only thing this particular one won’t do is give birth, although there is one that does.”

While Conton was speaking, SimMan was experiencing seizures.

“We can monitor the seizures and anything else with his patient monitor,” she said. “We can make his vital signs decrease or increase depending on how he is treated by the nursing students. It’s as close to real life as we can make it. He will expire if he is not treated appropriately by the students.”

Students can also learn whether they are performing certain medical procedures properly.

“We can do CPR and we can also gauge the quality of the CPR that we are doing,” she said. “We’ll know how deep the compressions are, and how fast they are. We can print that out and assess it. This guy is state-of-the-art and there’s not anything any better. He is our most advanced mannequin.”

Nursing Professor Sharon Sutherland operates SimMan, as she can also speak through him.

She is essentially the patient.

“Earlier, I wasn’t feeling well but my nursing students did things and I now feel much better,” she said, as SimMan. “I am behind the window operating him, but I first have to program him into the computer. “I can program just about any kind of ailment.”

District 36 Assemblyman James Oscarson was invited to check out the lab.

“I was very excited to see what was going on in our own community working with Great Basin College. It’s just a great opportunity for people to learn and integrate into the communities where we need them the most,” he said. “When I went to nursing school, none of these things existed. I’m impressed with the program here in the community.”

Donnelli, meanwhile, said Pahrump students did not have much of an option when it came to studying nursing.

The nursing program can handle up to 12 students at present.

Donnelli said prospective students must earn the privilege to enter the nursing program.

“We look for highly-qualified candidates and you have to meet the minimum requirements,” she said. “Our program is unique in Nevada, in the sense that we had a 100 percent pass rate three years in a row. We are the only program in Nevada that can say that.”

“That’s very important because we want to maintain our great reputation,” she said.

The application period is now open for the fall of 2016.