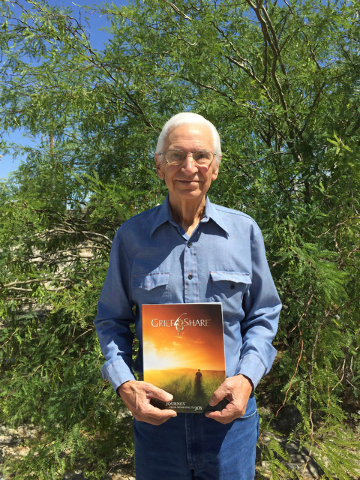 When a loved one passes away sometimes the grief associated with the loss is tough to deal with by one’s self, especially with those who have no one to turn to for support.

A new program called, Grief Share, being run out of Central Valley Baptist Church, located at 3170 S. Blagg Road, will offer a structured program to help cope with their loss.

Peter Giordano, the program’s organizer, got the idea for the grief symposium from his daughter Veronica Moats, after the death of his wife, Anne, of 55 years.

“My wife passed away January 9, and we had an agreement that if something happened to either one of us, we would stay with our daughter in Las Vegas,” Giordano said. “So I stayed with my daughter in Las Vegas for three weeks and I was a total basket case. The best way to describe it is that I was lost, and was crying day and night.

“My daughter said, ‘Dad, there’s a grief program at my church in Green Valley,’ so we went.”

After attending the program at Green Valley Baptist Church in Henderson, Giordano and those who attended the symposium were able to get on with their daily lives, they weren’t overcome with grief as they were before the program.

“When we first started, there wasn’t a dry eye in the place, and there were 15-20 people there grieving spouses, children and close relatives,” he said. “When we finished up the final week there was hardly anyone using a tissue.”

After Giordano witnessed what the program could do for grieving people like himself, he thought the symposium would be a great fit in town.

“After seeing the good that it had done for these people and helped me to recover somewhat, I said, ‘Geez, why don’t we have something like that out in Pahrump,’” he said. “There’s 38,000-39,000 people, and I would have to drive 120 miles round trip to get this (help), so I talked to the people there in Green Valley to get some information on how to start it.”

After getting the info, Giordano wasn’t sure if he could go on with getting the program up and running but one night after leaving his decision in “God’s hands” he got a call out of the blue.

“Two days later a pastor from Vegas calls me and tells me ‘I just talked to Pastor Ron Fairbairn in Pahrump and mentioned you, and the Grief Share program and he’s really excited about it,’” Giordano said. “So I called him and he was very excited, so I met with him the following day. He was willing to host our program.”

The program will begin July 11, from 1 p.m. to 3 pm., and will last 14 weeks, as there is an orientation during the first meeting. This will mark the first of three times the program will run this year, as it will restart again a month after the first one ends.

Giordano explained that the symposium is open to anyone 13 years old and above, and who’s lost someone close to them, not the passing of a pet or anything like that.

Despite the program taking place at a Baptist church, people from all denominations are welcome to attend.

“Even though this is church-based, you don’t have to be a believer,” Giordano said. “You can be Jewish, you can be atheist, Muslim, it doesn’t matter. If you’re grieving a loss of a loved one, you’re welcome.”

The program is conducted in three parts, which include: a video, discussion, and a workbook. There is no charge for the program itself, but there is a $15 fee to pay for the workbook.

In addition to Giordano, Jack and Joetta Walsh will serve as facilitators in the program, and they can relate to the participants as they have been through personal loss as well.

Giordano said that if the program helps even one person cope with the death of a loved one as it did him, then he’ll deem it a success.

“Grief Share literally saved my life because I was just lost, totally lost,” he said. “Being married for 55 years she was part of me.”