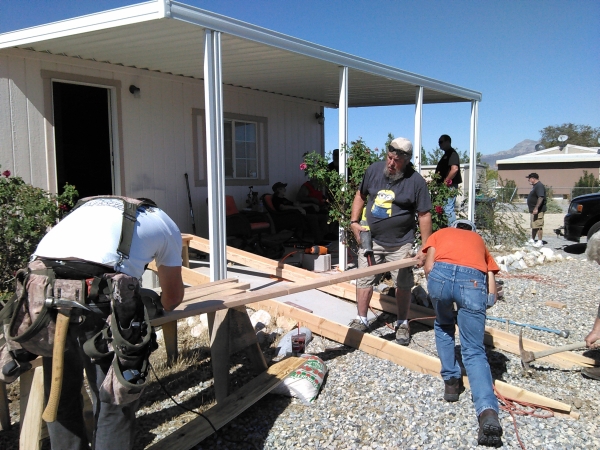 A group of men dedicated to motorcycle riding showed what it means to be compassionate, considerate and thoughtful to a fellow biker on Saturday.

More than a dozen individuals with tools in hand, built a wheelchair ramp for Mike Barr, who was told by doctors he may have to rely on mechanized transportation to get around from now on.

As the group hustled to create the ramp, Barr said he’s happy to know that getting in and out of his home won’t be much of a chore once the work is completed.

Barr’s health problems began as a result of serving in Vietnam.

“I have had chronic leukemia that was caused by the chemical defoliant Agent Orange in Vietnam,” he said amid the sawing and hammering. “It stays dormant most of the time, but it’s gone full blown now. It gets into your bones and starts eating it all away. Now I am forced to use my mobility chair to get around.”

The kind gesture was not lost on Barr as he watched the group saw, assemble and affix the ramp into place.

“I feel blessed to have so many friends, but the motorcycle community here in town is unbelievable,” he said. “If anybody needs anything, they are right there. It’s very nice, because many people have a misconception about motorcycle people, but this is one of the things that they routinely do. If anybody needs help, they are there.”

Local business owner J.B. Marquez was among the group of bikers on Saturday.

Marquez owns J Mar Customs on Highway 160 and helped to organize the project. He noted that he was not alone in the endeavor.

“Home Depot donated materials and I had a box set up in my shop where people donated money to it,” he said. “The Pahrump Rotary Club also helped with this project. I’ve known Mike for about 10 years and he’s been a part of the community, helping out with the annual diaper runs at my shop. He’s an all-around good guy.”

Marquez also noted why he helped to organize the effort.

He said it comes from a higher power.

“I do this in the name of Jesus,” he said. “We are Christians and we feel that’s the right thing to do. We have taken food to the homeless at the park and we have our annual diaper runs. We also helped out a family with 6 kids who were having problems.”

Marquez’s wife Deb, said by all of the bikers coming together, the action helps to dispel certain misconceptions about the group.

“This is the kind of exposure that bikers in the community really need to have because this is the true heart of a biker,” she said. “Bikers are big-hearted and willing to help. They don’t expect anything in return, they just want to make life better. It’s unlike all the negative stereotypes that we’ve seen over the years.”

The lead foreman of the project, Henry Owens, said it was a no-brainer to help with the construction of the ramp.

“Without a ramp he wouldn’t be able to get inside his house,” Owens said. “What’s the sense of renting a house if you’ve got to sleep on the porch? I’ve known Mike about a year and this is what we’re supposed to do. That’s what we learn in life. You’ve got to help each other and take care of each other.”

Pahrump Rotary Club President and local businessman Roy Mankins said the Rotary Club routinely gives back to the community in a number of ways throughout the year.

He noted that Barr has been a very active member of the community for many years.

“They came to us and said they were been able to raise everything, but they needed a certain amount of money, which they requested,” he said. “The Rotary Club is actually cutting a check for the amount and some of the materials, and they went out and built it.”

Mankins, who was also at the work site, said he was amazed at the number of volunteers participating in the project.

“The volunteers are so great and there is a certain misconception about bikers,” he said. “I went over expecting to see two or three bikers working on the ramp but there were a bunch of cars and a couple dozen guys out there with every kind of tool you can imagine and they were just ripping it up and I was so happy to see that.”

“They have taken it apart and put it back together about five different times and I think they’re trying to figure out how to get a Harley engine in there, but I’m not sure though,” he said with a laugh. “They fixed it up but he still couldn’t get it in his house because he didn’t have a ramp. Now he does.”