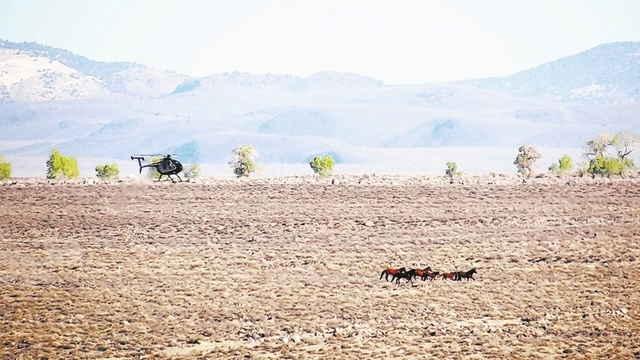 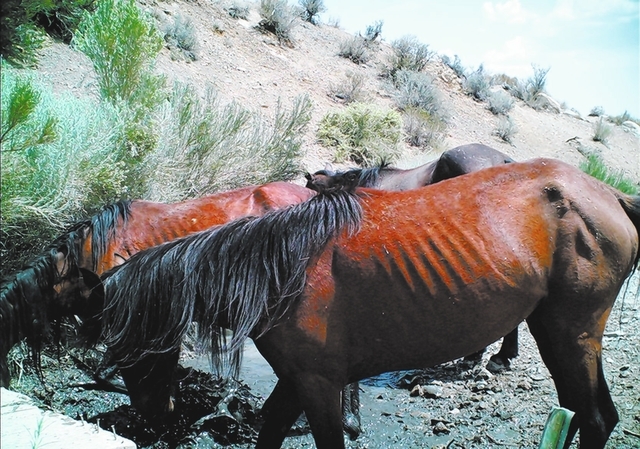 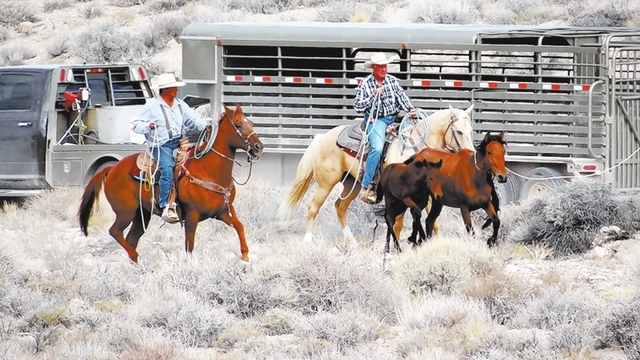 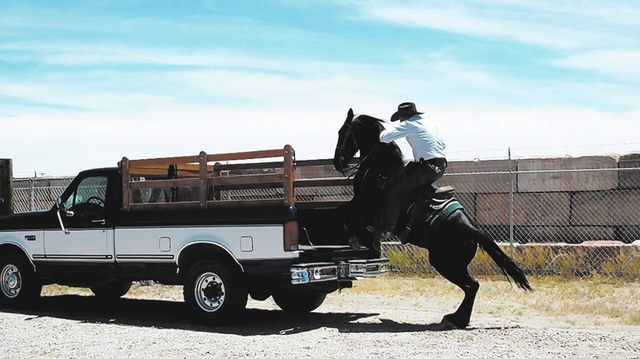 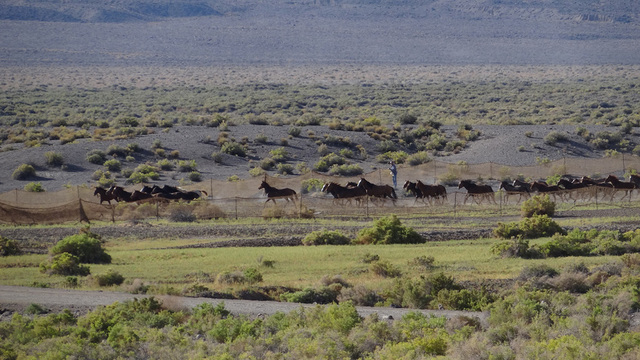 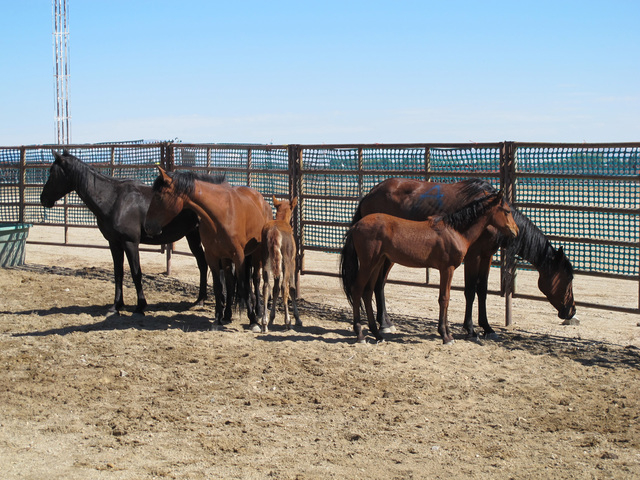 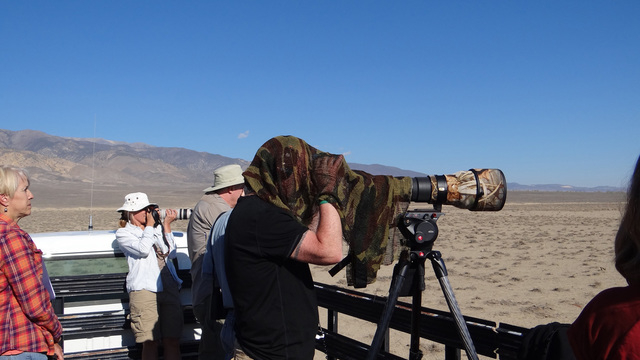 There is a large controversy over something dear to the heart of animal lovers and those wanting to protect what is considered a part of western heritage — horses, wild horses in particular.

There are a number of issues on both sides. Should humans butt out and leave them alone, or are the animals and the land better off under management?

Advocate groups wanting to save the wild mustangs think the government should just leave them alone, others say the horses are being gathered and removed in order to provide rangeland for ranchers. Yet others are convinced the Bureau of Land Management is selling the gathered animals to foreign markets for human consumption.

BLM Assistant Field Manager for Renewable Resources Deej Brown is located in the Tonopah field office. Over the past two weeks there have been two horse gathers, one in Fish Lake Valley and one other in Gold Mountain, both are Herd Management Areas for the BLM and Brown is in charge.

“It is not only against our policy to slaughter the horses, it’s not a goal of the BLM. The two gathers which took place up here were emergency measures because the animals were in poor condition, had lowered body weight and couldn’t have made it through the winter,” she said.

The pictures running with this story were taken of the animals from both reference HMAs. In effect, the BLM performed a horse rescue.

Brown said there has always been conflict over useable rangelands. Who should take priority? Horses? Cattle?

Brown said, “The BLM issues grazing permits for rangelands and the horses located on those rangelands are figured into the equation. It’s two-fold. The permits are very specific and yes, the BLM controls the number of animals grazing the land.” She said when those horses are removed it isn’t an emergency measure, it’s just to control the numbers.

“Each of the Herd Management Areas is allowed a specific number of horses.”

She said grazing permits depend on the land as well. “We have rangelands that won’t support horses, much less livestock. We’ve had drought conditions in the northern parts of the HMAs.” She said no one has grazing permits in the areas where the two gathers took place. “We haven’t had anyone running cattle in those areas for three years.”

The BLM may be getting a bad rap over the horses. When asked exactly what happens to the captured animals, Brown was very forthcoming.

The horses gathered in Northern Nevada went to two different holding facilities. Horses from Fish Lake Valley went to Ridgecrest, Calif., and the animals from Gold Mountain went to Gunnison, Utah. She said of the 155 gathered animals, 149 were transported.

“We have a Department of Agriculture vet examine the animals for soundness, disease and overall health,” Brown said. “Of the 33 horses from Gold Mountain, we were advised by the vet to euthanize one animal with genetic deformities.”

She said the BLM plans to remove all the animals from the Gold Mountain HMA because of inbreeding. “Although there are very few horses in that area, the animals are in a bottleneck of sorts. There are no other herds mixing with them. The inbreeding causes deformities like the animal we had to put down.”

She said likewise, when the staff discover good bloodlines, conformation and different colors and markings, some of those animals are returned to the herd or integrated into another herd to keep or make the genetics stronger.

Of the 122 animals gathered in Fish Lake Valley, 117 were transported. Again, Brown said the horses were examined by the vet and euthanized under his recommendation. “There are specific criteria calling for euthanization of those horses,” Brown said.

In an email she stated the criteria as, “The horse displays a hopeless prognosis for life.

Has an acute or chronic illness, injury, physical condition or lameness that would not allow the animal to live and interact with other horses, keep up with its peers and maintain an acceptable quality of life constantly or for the foreseeable future.

Here a State or Federal animal health official orders the humane destruction of the animal(s) as a disease control measure.

She said old horses with worn and broken teeth which leave them unable to eat, and crippled animals fall under acceptable quality of life.

Brown said the animals from these particular gathers needed water and feed, which they were given. “It’s amazing what it can do for an animal in bad shape. They start to perk up and show personality.”

At the holding facilities, the animals are treated for any injuries and given follow-up care. Brown said mares and foals are kept together until weaning and then the youngsters are put with a group of their peers “so they are never alone and scared.”

The horses are allowed to put on weight. “Sometimes it takes several weeks and sometimes it takes months,” Brown said. “It depends on what kind of shape they are in. Every animal has an individual recovery time.

“We also do DNA testing on the horses to see their genealogy so to speak. We can find out where they originated from — Calvary horses, ranch horses and Spanish horses.

She said when the animals are ready, the BLM will hold an adoption. Potential “parents” have to fill out an application and go through a screening process before being allowed to adopt a wild mustang.

“As far as timelines, it varies on locations and condition of the horses. Information on adoptions as they come about can be found on the BLM NV web page.”

“We also hold periodic auctions of horses that can be gentled.” She said a program at the prison in Gunnison allows suitable inmates to work with the wild horses, break them to a halter and sometimes more. “The horses we auction are ready to start riding.”

There are other programs involving the wild horses. There is an Extreme Mustang Makeover where again, applicants must be screened. Once accepted, the applicant is given a wild horse to train. The time frame is very specific and the training challenges are specific as well. More information and applications are available at extrememustangmakeover.com.

Local resident Tom Shiloh participated in the makeover challenge several years ago and said he was hoping at the end of the competition to be “allowed” to buy his horse. He did a good job of breaking the mustang — right after the horse broke his knee. Shiloh said they “came to an understanding.”

Saving these wild horses isn’t cheap. Brown said the cost to the government for each horse in the gather/removal is between $110 and $280.

“This doesn’t take into account operational costs. Those costs can vary depending on many factors out of our control, including cost of feed in any given year.”

Other information on auctions, training a mustang as a recognized breed, shows and expositions may be found at: www.blm.gov/nv/st/en/prog/wh_b.html, www.wildhorseandburroexpo.com and www.kbrhorse.net/whb/whbgroup.html.