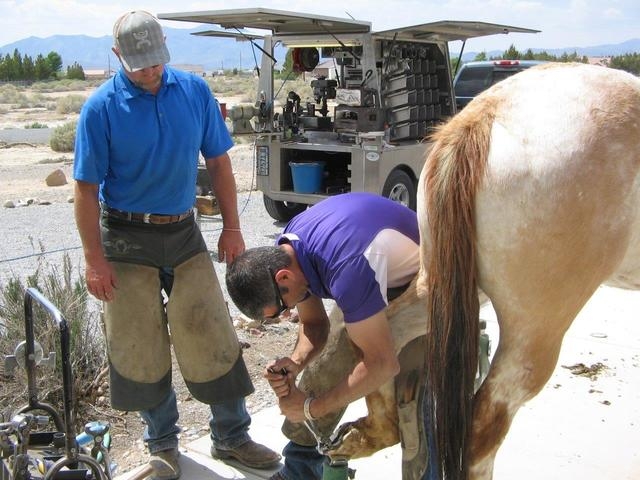 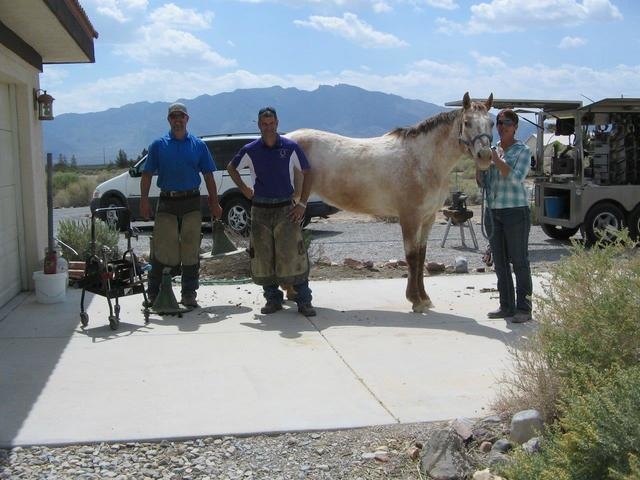 The training to become a certified farrier (horseshoer), or blacksmith is not an easy feat to master.

It takes a lot of hours to observe, study and work “hands on hooves” in the field or barn to master the techniques of the trade.

The term farrier and blacksmith may be used interchangeably depending on location, according to David Sierra of Pahrump, who is a certified journeyman farrier.

“I can pretty much tell somebody who’s from the East Coast because they’ll call me a blacksmith,” he said.

Wikipedia, the online encyclopedia, defines farrier as “a specialist in equine hoof care including the trimming and balancing of horses’ hooves.” It also states that a farrier “combines some blacksmith skills of fabricating, adapting and adjusting metal shoes” with knowledge of the anatomy and physiology of a horse’s lower limbs in caring for its feet.

After he finished college, Sierra thought about going to law school. That all changed when he started helping his friend shoe horses in New Mexico. Sierra liked it so much that when he moved to Las Vegas in 2001, he did an apprenticeship with other experienced horseshoers to learn the trade instead of going to a formal farrier school.

According to an internet search there are about 21 schools for farriers in 19 states, but there are none in Nevada.

Sierra said continuing education is all voluntary. There are no regulations in the trade unless you are a horseshoer at a racetrack where a “plater’s” license is required.

Racehorses get “plates” while other horses off the track get shoes.

Sierra explained that all horses do not need shoes. Some may need them for protection depending on their function, breed, or to get better traction. For example, a retired horse, or one just standing in a field would probably not need shoes. Genes can also play a role in whether or not a horse will have foot problems.

“The number one reason that horses will typically get shoes is when hoof wear exceeds growth,” Sierra said.

Sierra usually re-shoes his clients’ horses about every six to eight weeks depending on the growth of the hoof that needs to be trimmed to balance the foot before a new shoe is attached. If new shoes are not needed, the services of a farrier may necessary to give the horse a type of pedicure.

Clients don’t have to take their horses to Sierra, he travels throughout Nye and Clark counties with his “shop” on wheels. It is fully stocked with ready-made shoes, a grinder, a forge and other supplies fit for a farrier.

“The route I took, I think it’s extremely important to be able to use a forge and work, as we call it, ‘in the fire’,” he said.

He added that there are many horseshoers who just “shoe cold” and don’t use a forge which makes it easier to custom-fit a shoe. The four hooves on a horse are not all the same size. He explained the two front ones are relatively similar, but the back ones are typically slightly smaller.

Even though it’s not required to become a farrier, Sierra took several levels of stringent competency tests to become certified by the American Farrier’s Association. These tests included a practical where you actually work on a horse, a written section and the creation of a shoe display. To achieve the journeyman level, Sierra had to shoe a horse with handmade shoes he had to craft while being timed and complete a written test of medical terms to consult with veterinarians.

“You do it because you want to, for yourself, and I think for the horses, really,” he said.

Apprentice Lynn Rawcliffe of Las Vegas is following in Sierra’s footsteps, or rather hoof prints, and hopes to become a certified farrier.

“I’ve always loved the horses and it’s something I’ve always wanted to do,” Rawcliffe said “Yeah, I picked it up again about a year ago and really have been enjoying it.

“Probably, the most difficult part that I haven’t even gotton to yet is fitting the foot appropriately with the shoe.”

Patti Scharf has five show horses and uses Sierra to not only shoe them, but to also trim and keep the hooves in good shape.

“There’s an adage that true horse people believe ‘no hoof, no horse’ because if they are not sound on their feet, you can’t ride them, you can’t do anything with them”, Scharf said. “The hoof is so complex that unless you have somebody who is as trained and as knowledgeable as David is, it’s unrealistic to try to do it yourself.”

Scharf said Sierra knows that she wants what’s best for her horses. It’s not about the money, it’s about what they need.