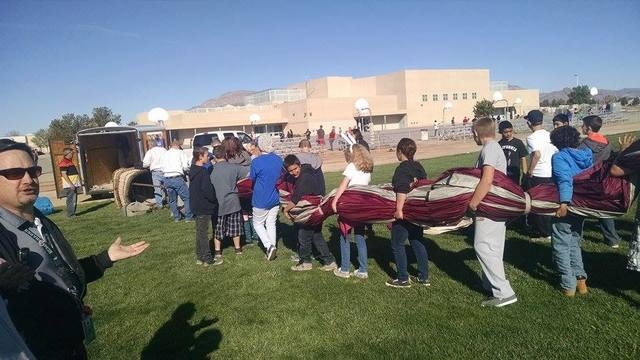 Pahrump’s four elementary and the middle schools hosted the balloon pilots where students and faculty assembled on the athletic fields as pilots arrived at the respective campuses.

Rosemary Clarke Middle School Principal Tim Wombaker said he and his students were pleased to welcome back the balloon pilots for the second straight year.

“The kids really took to them and obviously they were very excited to have the balloon pilots visiting,” he said. “I let them use their phones and take pictures, which automatically caught their attention because rules dictate they not freely take pictures at school.”

The principal said displaying a fully inflated hot air balloon on campus got the attention of all the students, which he said was a rare opportunity to learn about the sport from the experts.

“The great thing was, the balloon is something a lot of kids haven’t been up close and personal with,” he said. “They all were able to walk by and actually feel the heat of the burners. Some of the kids also helped to store the balloon away after it was over.”

Wombaker said the windy conditions on Friday prevented any chance of the balloon taking flight during the assembly.

“The winds kind of kicked up a bit too much, so unfortunately, they couldn’t go up and take an actual flight but they went up about five or 10 feet off the ground over the football field,” he said. “It was a beautiful morning and the kids really enjoyed it. Hopefully they also learned something about the sport.”

Pilot Ingrid Martell began ballooning more than 10 years ago after taking her first ride over the Prosser Reservoir near Truckee, California.

Both are from Sparks.

Shortly after touching down from her maiden voyage, she asked her husband, “When are we buying one of these?”

Since 2002, the Martells fly between eight and 10 events each year.

RCMS eighth grade student Ryan Blankenship said though he did not go up this year, he had the opportunity to fly in Pahrump’s inaugural event with a different pilot.

“The balloon visit was pretty cool,” Blankenship said. “They talked about what all goes into getting the balloon off the ground and keeping it up in the air. We all had a good time and learned a little about ballooning. Too bad the balloon couldn’t go up, but it was still fun to watch.”

Just a short distance from the middle school, Manse Elementary Principal Kyle Lindberg said his students gained a lot of knowledge about ballooning in just a short time during Manse’s assembly on Friday where students got an upfront and close look at a 77,000 cubic-foot balloon as it was being inflated.

“We had a wonderful opportunity to have the Details Above All balloon group from Simi, California come out,” he said. “The students had a wonderful time sitting on the soccer field learning about the sport of ballooning. The students even persuaded me to go for a short 15-foot ride in the balloon.”

Pahrump Valley Chamber of Commerce CEO Salli Kerr said visits to schools are common among many pilots when they arrive in a city or town for a balloon event.

“I think we’re going to try and add the high school next year,” she said. “I would like to get the science department involved where some of the older kids can actually build some model balloons. We really didn’t have time to pull that off this year.”