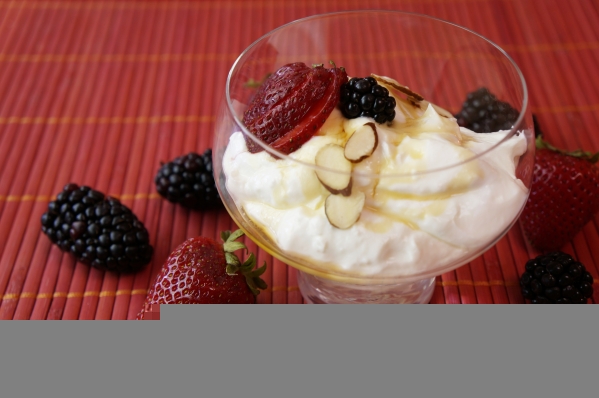 Ah, Greece. Back in the day when Bob and I were headlining on cruise ships, I remember a sunny morning wandering the island of Mykonos scouting for breakfast.

We found a little taverna with a view and enjoyed a modest bowl of straggisto, or strained yogurt, drizzled with honey, nuts and fresh berries. Simply divine. I still remember how lusciously thick and creamy the yogurt was.

Later that day Bob was attacked by a giant pelican, then we both got food poisoning from meatballs.

That yogurt was certainly a highlight of beautiful Mykonos.

Now Greek yogurt is all the rage. What gives it the thick, creamy texture is the extra step of straining some of the whey from the yogurt.

Making yogurt in the crock pot is incredibly easy and for less than 15 cents per four-ounce serving it’s totally worth doing.

1. Put milk in the crock pot on HIGH and heat to a temperature of 180 degrees. This will take about 90 minutes, stir occasionally and watch for scorching. This denatures the whey proteins to make nice creamy yogurt.

3. Remove a cup of the warm milk and add the yogurt, stirring to blend. Dump this back into the crock pot and stir.

Put the lid on, wrap the crock pot in the towel and set a timer for 3 hours. The towel helps the crock pot maintain a steady temperature.

4. At three hours check the temperature and if it’s below 105° turn the crock pot to LOW for 10 minutes, checking the temperature, then turn it off. Wrap it back up for 8 more hours or overnight. Just walk away.

5. Congratulations! You have yogurt! It’ll keep in the fridge for up to two weeks. Be sure to hold back ½ cup to start your next batch.

For Greek style yogurt; line a colander with cheesecloth and put your yogurt in to strain off some of the whey. Place the colander in a bowl to collect the whey and use it in smoothies, soups or give it to your pets.

Use plain yogurt as a base for sauces, dips, or in place of sour cream in recipes or flavor it with fruit puree, vanilla, honey, or your favorite sweetener.

How cool is that?

Frugal Food Finds contributed by Patti Diamond from Divas On A Dime â Where Frugal, Meets Fabulous! www.divasonadime.com Join us on Facebook at DivasOnADimeDotCom.