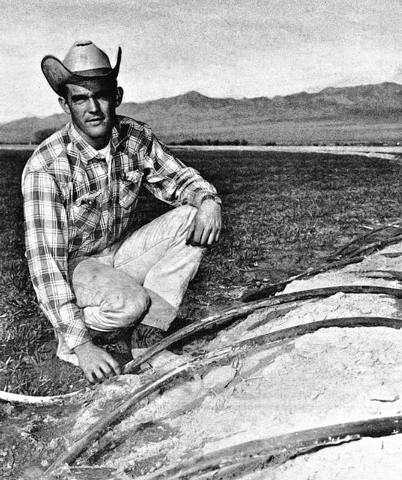 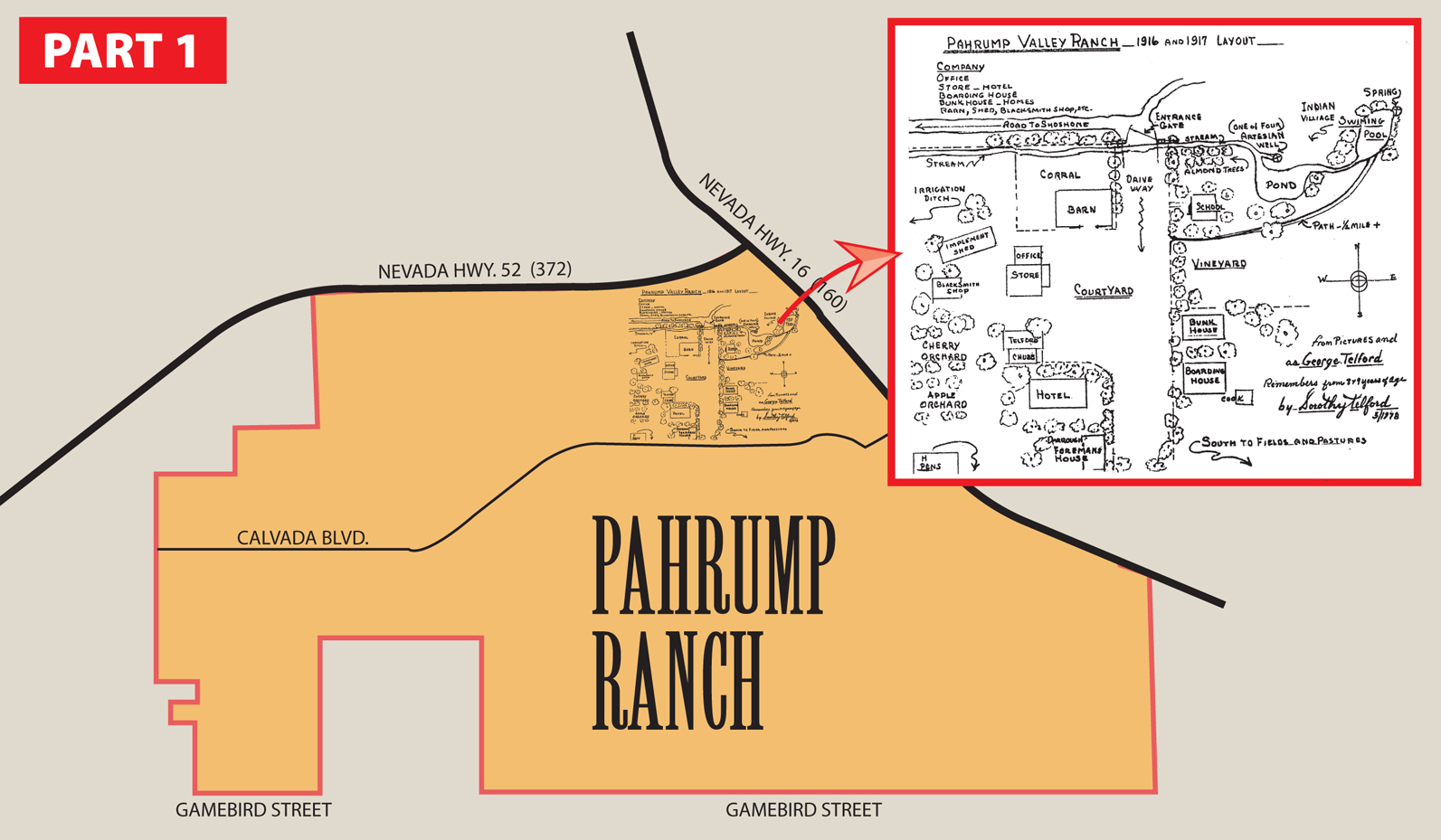 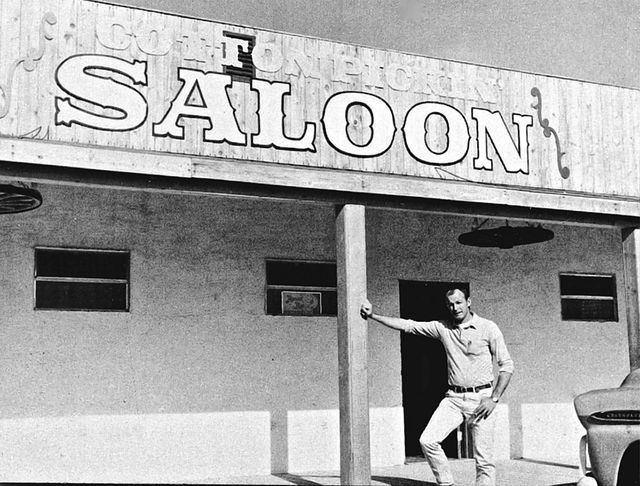 I recently completed an oral history with Mark Williams, son of Walter J. Williams, a former owner of the giant Pahrump Ranch.

That oral history is now at the printer and will soon be available at libraries in Nye County and other sites in Nevada, as well as on the Internet (NyeCountyHistory.com). In this column and the one to follow, I will note a few of Mark’s recollections concerning his father and the ranch.

Walter J. Williams was born in Comanche, Texas, in 1916. He married Nancy Ann Long, also from Comanche. At one point in the 1950s, the famous movie “Giant,” starring Elizabeth Taylor and Rock Hudson, was being filmed in west Texas. Walt and Nancy went to watch the filming. Nancy strongly resembled Liz Taylor and they were about the same age. Nancy was more than once mistaken for the beautiful star. Walt and Nancy had two sons: Rick, born in 1944, and Mark, three years later.

In 1947, the Williams family entered the cotton-growing business in Pecos, Texas, cultivating two sections. A great deal of cotton and alfalfa were being grown in the area at the time using well water pumped from the Ogallala Aquifer. So intense was the pumping in the area that in just 10 years Williams saw the groundwater level in his wells drop from 30 to 200 feet.

Needless to say, he became greatly concerned about the future. He kept his eyes open for other opportunities. In 1957, he saw a “for sale” ad in the Fort Worth Star-Telegram for a ranch consisting of 12,000 acres of deeded land, 16,000 acres of leased grazing land in the hills located east of the ranch, and a 1,000-acre cotton allotment located 60 miles west of Las Vegas, Nevada. It was the giant Pahrump Ranch. Recognizing a good excuse to visit Las Vegas, he checked out the ranch. He took soil and water samples and had them analyzed. The tests were positive. Walt could see a great deal of potential in the property and, with a silent partner from Pecos, purchased the Pahrump Ranch from E. B. Dickey and Associates of Arvin, Calif., for $400,000 on a four-year, lease-purchase contract. It took a big push to get the 1957 crop in, and by 1959 Williams had 1,000 acres of cotton under cultivation.

The Williams family kept a home on the Pahrump Ranch but their primary residence was in Las Vegas, where the boys attended school. Walt commuted daily to the ranch, piling up 50,000 miles per year on his car.

Walt Williams typically wore khakis, a white, short-sleeved shirt and a hat. In his pocket he carried a notepad and pen, which he lived by. He often had a Camel cigarette hanging out of his mouth.

Mark Williams learned to drive young. While still in Texas, he asked his dad if he could drive him into town to get a haircut. “Yeah, here,” Walt said, and handed his 10-year-old son the keys to his new car.

The headquarters of the Pahrump Ranch, its dwellings and equipment, were accessed through an asphalt-paved entry from Highway 372, about a quarter mile from the intersection of highways 160 and 372. Located there were “the old Pahrump Store building, silos, bunkhouse, and numerous dwelling and other structures . . . situated on both side of the street for about a quarter-mile stretch and radius.” The new metal shop building completed in 1961 was situated there and still stands today. It was there that Pahrump’s first Fall Harvest Festival was held, and for at least a time or two thereafter, Mark said. In subsequent years, the festival was held at the Community Center, located on five acres Walt Williams had donated.

Farther up Highway 160 toward Las Vegas, a couple of miles from the 372 intersection, was the middle portion of the ranch, known as the Mizpah. There sat a house and the No. 8 irrigation well. On the far end of the ranch up from Gamebird Road was the east border of the ranch, where there was a trailer house along with the No. 10 irrigation well. Virgil Bateman and his family lived there. Virgil was a key employee, a holdover from the previous ownership. Mark said Virgil played “a huge part in the ultimate success of the Pahrump Ranch.” He was intelligent and resourceful and possessed remarkable knowledge and cleverness, keeping everything going mechanically.

A key to the successful development of cotton-growing in Pahrump was construction of the cotton gin. Williams donated 40 acres for the facility “without any kind of clause of reversion that I know of,” Mark said. He described his father at the time as being “dirt rich and cash poor.” Prior to the gin’s construction, Pahrump growers were using hay balers to bale the cotton, which was then trucked to Blythe, Calif., or elsewhere. Construction of the gin made cotton-growing in the Pahrump Valley more viable. The gin was located at the site of the present Pahrump Nugget, at the junction of highways 160 and 372. It was dedicated on Oct. 10, 1959, and cost approximately $450,000.

Mark described his father as having, for want of a better term, a kind of godfather view of the community. “‘There’s no reason why we can’t bring everybody to benefit,’ Dad said. He did that with the electric power, the telephone, the gin, the community center, the Harvest Festival and so on.”

I asked Mark if his father had ever indicated he had a larger plan for the Pahrump Ranch land, given it was one of the largest parcels of privately held real estate in Nevada, with so much of the state held by the federal government. Indeed, Walt had spoken of his game plan. He told Mark, “I wanted to go in and shore it up and get it up on its feet and viable long enough to be able to sell it as a package to subdivide it, because I felt the proximity of this big chunk of land to Las Vegas would make it very lucrative to someone.”

Walt recognized the ranch was going to be an exhausting, risky endeavor from the beginning and it would not be easy. But he had a can-do spirit, much like the Joseph Younts in the 1870s, the Elmer Bowmans in the 1940s, and Tim Hafen beginning in 1951. Mark said, “He wanted to get it up and surviving long enough that a buyer or buyers with deep wallets, heavy-duty hitters, would come in and take it off his hands and make it work. … He was a very visionary guy from day one.”