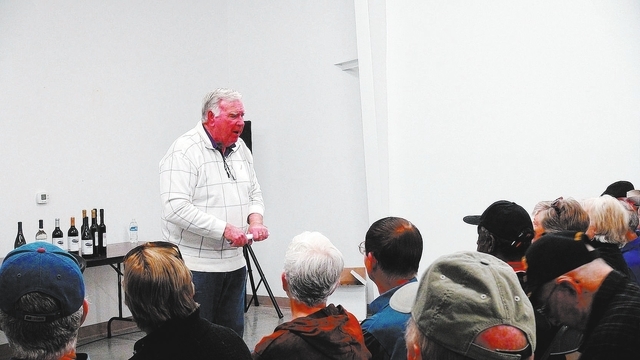 Longtime Pahrump resident and owner of the Renaissance Tuscan-style Sanders Family Winery Jack Sanders loves to talk, and as the guest speaker during Saturday’s lecture series hosted by Pahrump Valley Museum gave a well-received storytelling presentation of the history of Pahrump as it related to his expertise in wineries.

Sanders draws quite a crowd and the presentation room was filled to capacity with over 100 individuals interested in the history of Pahrump and his knowledge of wineries.

Sanders began his story in the early 1800s and featured two predominant figures of the old west, Kit Carson and John C. Fremont and their journey through Pahrump as surveyors.

During their surveying adventure they came in contact with the Native American Paiute Indians who named the Valley we call home “Pahrump.”

The name “Pahrump” is a word the Paiute Indians use to represent water flowing from rocks. Sanders went on to say the Paiute built their communities around the area’s artesian wells which were also home to wild grapes growing naturally in the area.

Sanders pointed out that even though one might think grapes would not grow very well in the desert, this climate was actually ideal for grapes.

He then talked about the DNA of grapes and said some of the finest wine-producing grapes originated in Iraq and Iran, which is also a desert climate. This was the home of the famous Shiraz grape which produces bold, intense flavors.

The story then continued on in biblical proportion with the story of Jesus changing water into wine. This part of the story had a very humorous element and brought his listeners to laughter.

The story was brought back home when he spoke about the local climate of the desert and how it usually works in favor for his winery.

However, last July brought five inches of rain to the valley causing the sugar levels of the grapes to spike quickly.

When Sanders’ winemaker Kent Walker said the grapes were for ready for harvest, there were no workers to pick them. Harvesting is usually left for September and he was simply not prepared.

Walker reminded Sanders of times when visitors at the winery made the comments, “If you ever need a helping hand just give us a call.” Sanders wondered about the integrity of those individuals and put it to the test. He created a blast email asking for volunteers to help.

He said “the response was overwhelming.” He said the winery actually had to turn people away. He complimented the character of the Pahrump community to his audience.

Sanders made mention of a new timeline display installed in the Pahrump Valley Museum featuring the wineries of Pahrump.

He proceeded to use the information from the new display by talking about the gold rush of 49ers with the Old Spanish Trail and the Santa Fe Trail. Some prospectors made their way through Pahrump and as a result they started settling in Pahrump and in Las Vegas.

He talked about family names that grew grapes here in Pahrump. Joseph Yount and his family were the first one to settle and grow grapes in Pahrump.

Sanders moved forward into the next century with his story. He specifically spoke about the years of 1920 through 1933.

These were the years of prohibition here in the United States. He went on to speak about bootlegging and “speakeasy” clubs that created the counterculture in America.

He covered the years of prohibition before moving on to his family history.

The Sanders family on his father’s side came from Wise County, Virginia. There is a very famous area down there called the Cumberland Gap. His grandfather John Beal Sanders and his brother Alfred had a 160-acre farm in the area they called the hurricane section. They were completely self-sufficient farmers.

Sanders’ told a humorous story about his grandfather running into issues with the authorities over a distillery that was on the property for the creation of what they called the Best Shine. “The creation of alcoholic products has been on our bloodline for a long time,” said Sanders.

Sanders storytelling then took another leap to a more recent past. The statutes of prohibition didn’t really change until 1991 here in Nevada. “You could make wine but you really couldn’t sell it,” said Sanders.

Sanders wanted to clear up some misconceptions concerning the first winery built in Pahrump. He went on to talk about the Binion ranch, which is currently up for sale, located a short distance from the Pahrump Valley Museum. Phil and Ted Binion had the first winery in Pahrump. He spoke of meeting the Binions and how “Ted was not drunk at the time,” which elicited laughter from the audience.

Those attending were enthusiastic in their praise of Sanders’ presentation.

“I have lived here for 15 years and have learned more about the history of Pahrump than I ever thought possible from Mr. Sanders. He showed me that the citizens of Pahrump are going forward even though it may be slow times. Pahrump has a good history and its citizens are very innovative and continue creating a good history,” said Marsha Goldstein.

Sanders was enthusiastic, too. “The audience was wonderful, they were a great audience. I am told it is probably one of the largest groups they have had here at the museum since they started these speaking events.”

Kay Hendricks, a former tour guide from San Diego took home a bottle of Ruby Port wine during the raffle. Sanders mentioned that it took seven years to have the wine ready for market.