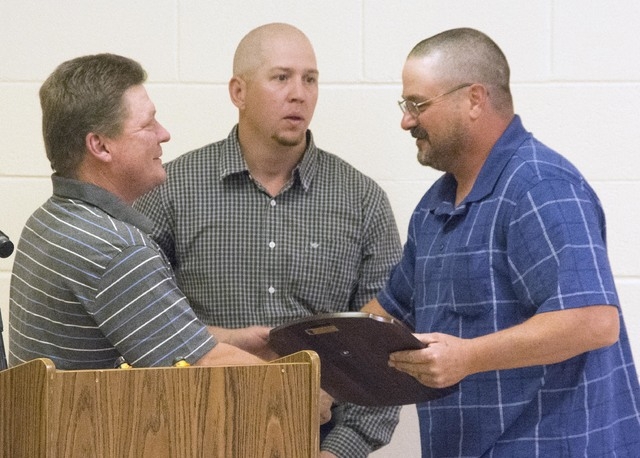 When your house is burning down in Beatty you want to be reassured that someone will answer the call to come put out the flames.

At Beatty’s all-volunteer firefighter department you can be assured of one thing and that’s James Revert will be there.

Revert was named Beatty’s firefighter of the year and the town recognized his service two weeks ago.

Revert was humble when talking about the award.

“They stealthed me with this,” he said. “I have an unfair advantage in that I am in town all the time. The award has a lot to do with the number of runs you make. I felt bad and I told them before don’t put me in that competition because I do have an advantage.”

This was the first time he received the award in his nine years as a volunteer fireman.

He said he got into the department because it was a family thing to do.

“All my brothers and my uncles and my dad all have been in the department,” he said. “That’s what a lot of the guys do.”

Fire Chief Mike Harmon believes Revert is a dedicated volunteer of the 17-man roster. He said this award goes to the person that does the best throughout the year. Revert is an exceptional firefighter.

“Revert last year it didn’t matter what the call was, James was there, medical calls or fire calls. James was there on medical calls and he is not an EMT. He showed up in case they needed a lift assist. He is an all-around great guy. He also attends all our special events too.”

The chief said the Beatty Fire Department had 110 calls last year and Revert made 97 of them.

“He exceeded everybody and makes all the meetings,” Harmon said. “He missed one out of 27 meetings.”

The guest speaker at the presentation of the award was made by his father, former Nye County Commissioner and Beatty fireman Robert Revert.

“Of course I was very proud of my son for receiving the award,” Revert said. “He is a hard worker and he is very much a part of what that department does.”

Robert Revert said James is continuing the tradition of Reverts in the department, which started with himself and his cousin Steve.

He said before his time there was no fire department.