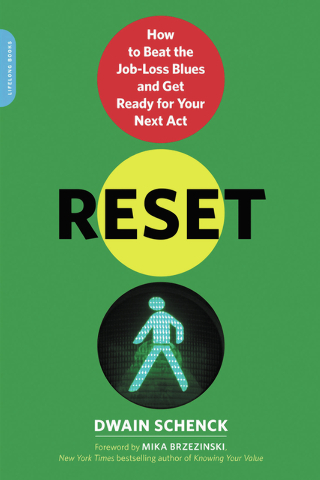 You haven’t had to hit the alarm for quite a few months now.

You haven’t had a whole lot of reason to look presentable, either; sweats and tees are just fine. You’re not even sure your office attire fits anymore.

Retired? You wish it were that simple. No, you’ve been downsized, laid off, fired, let go and it’s starting to wear on you. But after you’ve read “Reset: How to Beat the Job-Loss Blues and Get Ready for Your Next Act” by Dwain Schenck, you might be inspired to hit the streets again.

Dwain Schenck was part of an inherited staff.

(You know where this is going.)

He’d been hired for a job he loved by a man for whom he truly enjoyed working. When that guy left, the woman who took over was amazing. She let Schenck interview the man who would eventually become his third boss, the guy who made Schenck uncomfortable and who ultimately let him go.

At first, Schenck was filled with “fake bliss.” He was “too good for [that] company anyhow” and he figured it wouldn’t take him long to find a job. He had a few months’ severance, great ideas and tons of experience. He’d be fine.

But as the weeks passed, it became apparent that the search wouldn’t be easy at all. Schenck went on interviews that seemed to go well, only to end in silence.

He endured “courtesy interviews” set up by former colleagues and contacts, in which it quickly became apparent that there was no job to be had.

He obsessively searched online and even applied for positions for which he was extremely overqualified. The lack of job-hunting success made Schenck depressed and his family life suffered.

Through this experience, though, Schenck learned several things, and he shares the advice he discovered: Upgrade your resume and “make sure [it] doesn’t read like an obituary…” then utilize the internet (including LinkedIn) by tweaking it to maximize search engines. Become a “networking machine.” Be “transparent” about your age and experience, have a strategy for all interviews, and practice what you’ll say before you leave the house. Send thank-you notes following interviews. Be resilient.

And finally, “Don’t go it alone,” says Schenck. That’s the worst mistake you can make.

At the risk of being a spoiler, I should tell you that “Reset” ends on a nice up-note… but wow, is it harrowing to get to that point.

Author Dwain Schenck gives readers his story, warts and all. We’re privy to the embarrassments, the aggravations, the outrageousness, the highs and the bottom-of-the-barrel moments, including envy and consuming bitterness. The ferocity of the latter is quite disquieting, but not without reason; Schenck’s experiences as a job-hunter were often soul-crushing and, sadly, common – and on that note alone, his book offers lessons and tips all around.

Definitely, this is a book for job-seekers but there’s plenty here for upper management, CEOs, and anyone along the job spectrum who knows that, well, you never know. If that’s you, then “Reset” is a book to hit.