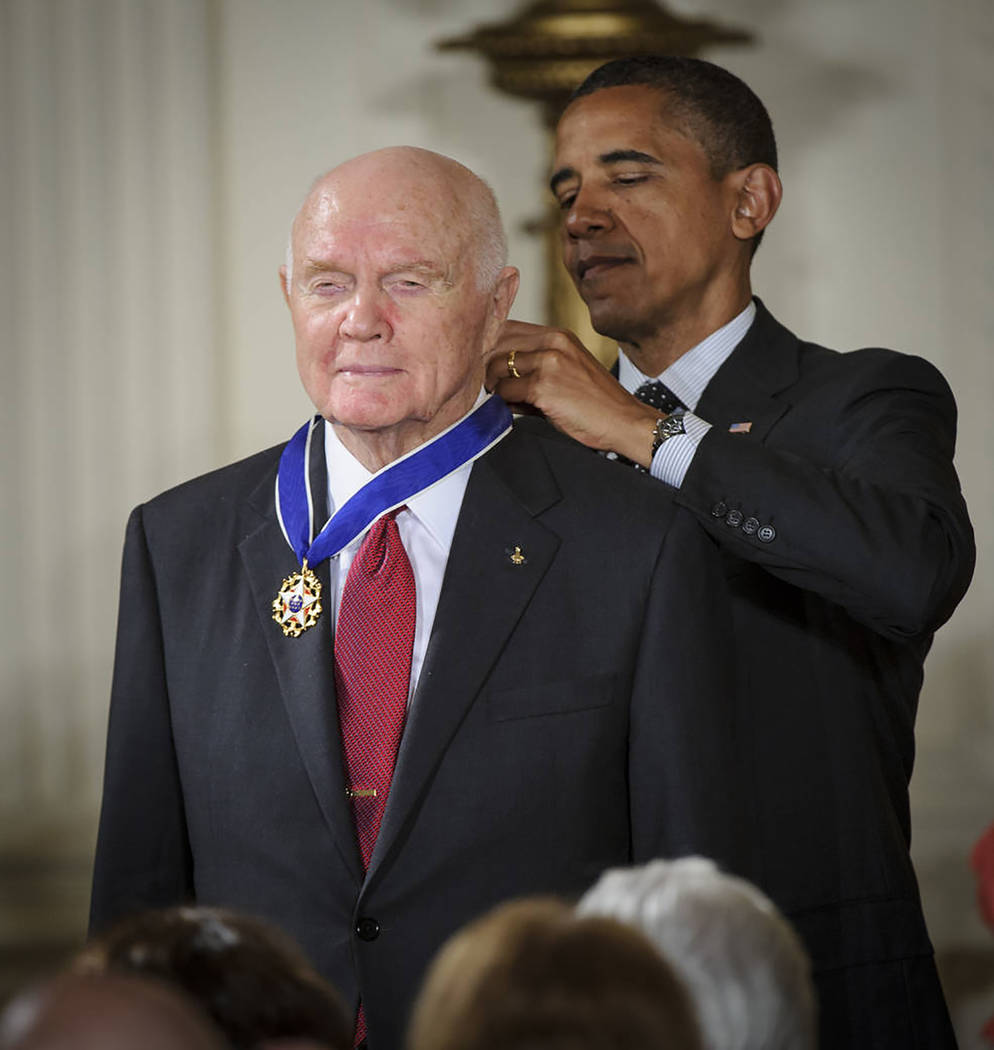 NASA/Bill Ingalls President Barack Obama presents former Marine Corps pilot, astronaut and retired U.S. Sen. John Glenn of Ohio with a Medal of Freedom on May 29, 2012, during a ceremony at the White House in Washington. Glenn died in December 2016.

Veteran John Glenn was known by most Americans, and indeed was internationally famous.

Most Americans also know that Glenn passed away last December at age 95. A distinguished citizen who was a retired United States Marine Corps Colonel, a former NASA astronaut and a past U.S. Senator, he was perhaps best known for his space flights.

Part of the first group of astronauts singled out by the nation’s space program, he was the first American to orbit Earth, circling it three times. While still a senator in 1998, he returned to space at 77 to study effects of the aged while flying in orbit.

As a member of the military, he entered the Naval Aviation Cadet Program in 1942 and was commissioned in 1943. He flew 59 combat missions during WWII and later flew 63 missions in Korea. He is credited with shooting down three MiGs in combat along the Yalu River.

But little known today is his distant brush with Nevada fame.

In August of 1999, Boulder City Garrett Middle School Orchestra teacher Adam Schultheis was named an Honoree by the Disney American Teacher Awards. One of 39 teachers nationwide chosen from thousands of nominations, Schultheis said at the time that he used the old-fashioned method of simply presenting musical material to his students and then adding a lot of heart.

Quoted at the time in the now defunct Boulder City News, which I edited, he said, “Teaching the orchestra, “is not a dog and pony show” and he “doesn’t do song and dance” when it comes to his teaching methods. What’s more, he added that it was “really nice to get recognition, but he felt that there are “a lot of teachers out there … that are good teachers … who just don’t get the recognition.”

The date for the awards ceremony, being held in Hollywood, was set for November of that year. I learned that Glenn was going to be a speaker at the event, and I wanted to report on Schultheis first hand. I applied to Disney for media credentials, which were granted. Later I became aware that of all the nominee geographic areas from around the nation, Nevada was the only out of state region to send a reporter to cover its local teacher.

I showed up at the historic Pantages Theater and took my place among other reporters, all of whom were from Southern California. We were directed to the media room, where speakers and award winners were sent to be interviewed and photographed throughout the evening, if they so desired. Most didn’t. They preferred to stay in the auditorium and watch the event first hand. The media room did have a closed circuit television showing the festivities, and reporters were under strict Disney security to not leave the designated space.

Anticipating the situation, I had an advance plan worked out with Schultheis in order to photograph him for optimum coverage. Win or lose, I asked him to stay in his seat when the ceremony was over. I would come to him to take his picture on the stage with an oversized Disney American Teacher logo looming as a backdrop.

Schultheis was not named Teacher of the Year, but it was still a major story for me. He stayed in place while patiently waiting for me to arrive. What I had not anticipated was that as I attempted to make my way to his seat, I had to fight my way against the thousands of audience members who were headed out of the theater into the lobby.

It took me quite some time to muscle my way in with camera in hand, but it was well worth it from a news perspective. I was able to shoot several photos of the educator on stage. Then it was time for part two of our plan. Glenn was in a celebrities room upstairs in the building, and I asked Schultheis to follow me there to take his photo with the famed astronaut and Marine Corps veteran.

When we arrived via escalator, Glenn was in the hallway with his wife, talking with someone. I approached him and politely asked if I could take his picture with Schultheis, who was standing next to me. But Glenn’s wife had other plans. Apparently, they had to meet with officials downstairs, and she shook her head “no” as she grabbed her husband’s hand and headed to the escalator. I was momentarily stunned. But I was in no mood to let that photo op slip away from me. I instructed Schultheis to follow me to the stairway that was situated next to the escalator.

We ran down to the bottom arriving ahead of Glenn and his wife, and I advised Schultheis of what was to come. I told the music teacher, “When Glenn steps off the escalator, put out your hand to shake his, and offer congratulations.” And that’s exactly what happened. Unaware of the “ambush,” Glenn stepped off the escalator and automatically shook Schultheis’ waiting hand while I clicked the shutter.

As a result, that photo appeared on page one of the Nov. 18 edition of the Boulder City News, accompanied by another photo of the teacher standing on the Disney stage that I had taken earlier. Inside the paper were two other photos from that evening, one with Schultheis and Disney Company Chairman Michael D. Eisner; and another with Schultheis and his wife Cynthia in front of the Pantages Theater with the overhead marquee reading “Disney’s American Teacher Awards.”

Schultheis continued his teaching career. Today many former students have a deep appreciation for music thanks to the teacher who put his heart into his instruction methods. John Glenn continued to receive honor after honor and be loved by generations of Americans.

But in 1999, Schultheis and I would spend many days talking about the time that Col. John Glenn, a hero of World War II and the Korean War and a NASA astronaut, received recognition standing alongside a local music teacher as subjects of a photograph on page one of a small town newspaper.