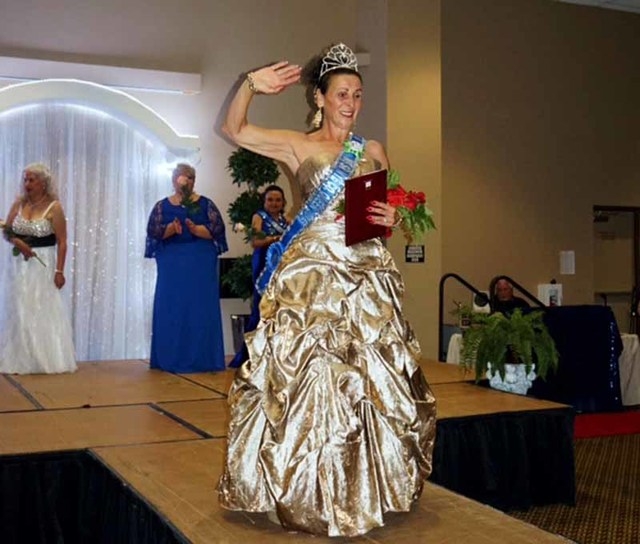 The Ms. Senior Nye County Pageant has a new queen for 2015.

Ginny Kelly-Vignato took the prestigious honor Saturday out of a field of seven contestants. As a result of her win, Vignato will advance to the Ms. Senior Nevada Pageant this summer.

Vignato, a native of Long Island, New York, performed a dance routine to the song “Crazy in Love” by the artist Beyonce.

Pageant Director Teri Rogers said Vignato’s overall performance is what the judges based their decision on.

“I think Ginny won all the way around,” she said. “The interview is very important and many of her responses were very elegant and articulate. I just think she showed a particular class all the way around. She showed that she really wanted it and worked for it and she did very well.”

Vignato, who moved to Pahrump nearly four years ago, has worked as a dental assistant and a school crossing guard, and now spends most of her time volunteering to collect clothing for school children whose families are less fortunate.

As a member of the Nye County Starlets, Vignato routinely participates in many charity events throughout the year. Among her hobbies are bike riding, swimming, yard sales and spending time socializing with family and friends.

Founded in 1986, the pageant is for women age 50 and over, and encourages community involvement by the contestants.

Not far behind Vignato on the judges’ score card was runner-up Meg Bazan.

As an aficionado of music and modern dance, Bazan has competed in the Fred Astaire Ballroom competition in Tennessee and Florida, as well as organizing Pahrump’s Hawaiian Club, where last year she organized the Aloha Strings ukulele group.

Originally from Hawaii, Bazan performed a Hawaiian hula routine in modern style for her talent portion.

Second runner-up was Marcia Walling, who performed a dance combo displaying a variety of dances.

Organizers said the annual pageant celebrates women of achievement, who represent a positive attitude toward aging and best exemplifies what senior women can and do accomplish. Rogers noted that the 2015 pageant was one of the best she’s been a part of.

“The ladies were just amazing and we had a lot of ladies who have never done anything like this before,” she said. “I have seen the practices and I have seen all of them from the very start with some apprehension and lack of confidence. To see them get out there and perform like they did was just amazing for me.”

Though Rogers said results of the individual routines are available to her, she prefers the element of surprise during the pageant.

“I never really liked to look at the results before the judges’ announcement because I’d rather not know.”

The event was held at the Pahrump Nugget Event Center.