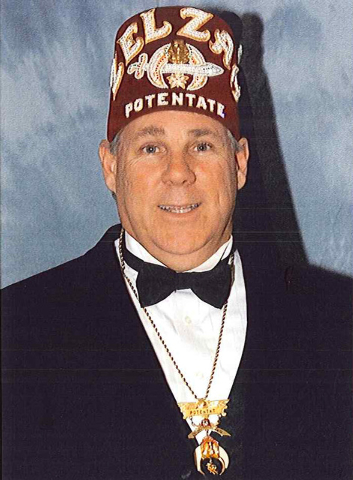 Local realtor Daniel Kelly has ascended to the highest rank of the Zelzah Shriners’ Las Vegas chapter after eight years with the organization.

Kelly was installed as potentate of the chapter this month, and will oversee more than 700 members in southern Nevada. He is the first Shriner from Pahrump to be installed in the position, which is being the president of the Las Vegas chapter.

“I am extremely honored to serve this temple as your newly elected potentate,” said Kelly, who joined the Shriners in 2006. “I look forward to an exciting year.”

Kelly, who is a property manager for Access Realty, is one of 30 active Shriners living in Pahrump.

Kelly said some of his objectives as potentate this year includes expanding membership and increased parade participation.

The Shriners International is a brotherhood of men committed to family, engaged in ongoing personal growth, and dedicated to providing care for children and families in need. Their backgrounds and interests are diverse, but the body is bound together by shared values and a desire to have fun, do well and build relationships that can last a lifetime.

Shriners are also known for their altruistic efforts in the field of medical care for children, most notably the Shriners Hospital for Children, which has 22 hospitals in the United States, Mexico and Canada.

Kelly noted that the Shriners Hospitals for Children specialize in burn injuries and have been leaders in burn care, research and education for roughly 50 years. As a result, the medical care provided at the hospitals, gives thousands of children a greater chance of surviving from all types of burn injuries.

The Shriners will have an outreach clinic Saturday in Henderson at the Galleria Mall starting at 8 a.m., one of four they have annually. The chapter will bring in doctors from its hospital in Los Angeles to screen kids with various issues including cleft palate, club foot, scoliosis, short legs, and other body ailments.

“They will come, fill out the paperwork, get seen by the doctor and see if there’s something we could treat that kid for,” Kelly said. “They’ll see about 80 kids.”

Children are treated at Shriners Hospitals with no cost to the family.

The Masons will also be there providing child identification cards.

Shriners International is a male fraternity formed as an offshoot of the Masons. While the organization itself is not religious, the fact that all Shriners need to be Masons, and Masons profess a belief in a supreme being, gives the Shriners a religious foundation.

The Shriners also have an annual circus in Las Vegas that is a fundraiser that, according to Kelly, “keeps the doors open” for the Las Vegas Shriners.