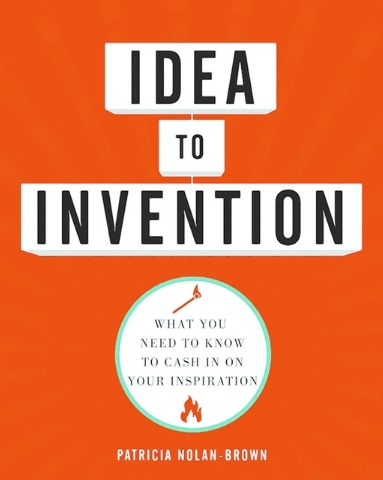 That little problem you’ve got is going to take some serious thinking.

Something’s not working out right, it’s not fixing an issue you’re wrestling with. It’s frustrating. You’ve tinkered and poked at it and you’re finally convinced that what you need is for somebody to invent a…

So why not you? Author Patricia Nolan-Brown says that anyone can be an inventor, and in her new book “Idea to Invention,” she tells you how.

They say that necessity is the mother of invention, and Patricia Nolan-Brown embodies that old saw. Just after she became a mother for the first time, she noticed a need for a product that wasn’t on store shelves – so she invented it.

But inventing — putting your ideas out there for acceptance or rejection — might seem scary. You’ve seen TV’s Shark Tank. You’ve seen wannabes who go broke obsessing over hair-brained ideas. You have to be rich, super-talented, and highly educated be an inventor, right?

No, says Nolan-Brown. “Ordinary people create their own success all the time…” As long as you keep in mind “six-plus-six,” you can do it, too.

First, cultivate an “I.N.V.E.N.T.” personality. Maintain a childlike Inquisitiveness. Be curious and observant. Practice your Nerve to stay the course and ignore naysayers. Use your Voice to display your passion. Keep your Energy level high by taking care of you. Feed your dreams the proper Nourishment by surrounding yourself with “cheerleaders.” And stick with it. Tenacity is the key.

Next, think about your product while researching. Is there something else like it in stores? Does your idea improve on something that’s already available? Who’s your potential customer?

Become familiar with terms and procedures you’ll need to know in order to bring your product to market. Determine the answers to “So what? Who cares? What’s in it for me?” Be careful to keep your ideas quiet while you’re in the early stages, before you’ve filed for a patent — which, incidentally, may be something you can do yourself.

Finally, put fear of failure aside and “try something on your own.” Says Nolan-Brown, “… the longest journey begins with a single step. It’s time to take it.”

Did you ever see something useful/unique/cool and say, “I coulda thought of that.” Now you will, with “Idea to Invention.”

With overflowing enthusiasm, author Patricia Nolan-Brown helps readers take their creative notions from mind to market, step-by-side-step. Though she calls it “simple,” I thought her method was anything but; there’s a lot to know when you’re an inventing entrepreneur, including that things get complicated.

But that’s okay. Nolan-Brown is very thorough here, and answers all kinds of issues before they’d normally pop up on the path to production. That’s helpful, like someone holding your hand in the process.

If you’ve had a brainstorm for a new product but you don’t have a clue how to proceed, get to a bookshelf soon. This Bible for Builders should be the next thing you read. For you, “Idea to Invention” is what I seriously think you need.