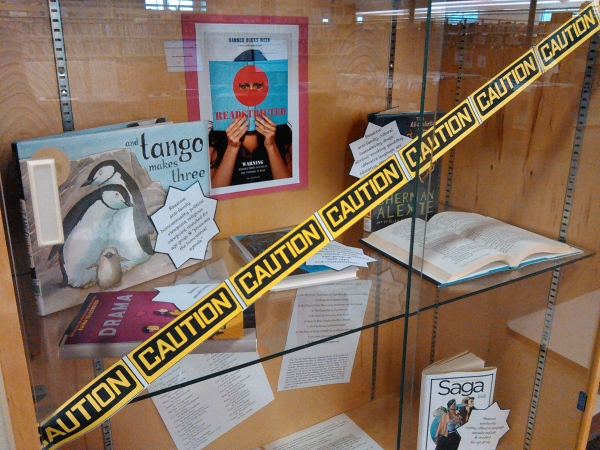 Officials at Pahrump Community Library are celebrating the freedom to read as they observe 2015’s Banned Book Week, from Sept. 27 through Oct. 3.

The national observance is sponsored by the American Library Association, with a focus on protecting First Amendment rights.

Mandy Cafeo, assistant director of the Pahrump library said many people would be surprised at some of the books that have been banned over the decades, including Harry Potter, Tom Sawyer and Huckleberry Finn.

She also noted that many groups around the country are now challenging what they believe are controversial books, rather than supporting an outright ban.

A challenge is an attempt to remove or restrict materials, based upon the objections of a person or group, while a banning is the removal of those materials.

“People also had problems with Harry Potter because the stories included witches,” she said. “They don’t really ban books so much anymore as far as nationally, but books can be removed at a public library or a school library if whoever is responsible decides it should be removed.”

Though the local library has never banned controversial books, Cafeo said parents have often challenged them.

“The only problem that we’ve ever had was some parents got offended about the young adult books, which covered sexuality,” she said. “We moved them to another part of the library and that satisfied the mothers who were concerned at that time and that was about 10 years ago.”

Cafeo created a display at the library to raise awareness of the nation’s First Amendment rights to free speech and freedom of expression.

She noted that challenges do not simply involve a person expressing a point of view, but rather it’s an attempt to remove material from the curriculum or library, thereby restricting the access of others.

Due to the commitment of librarians, teachers, parents and other concerned citizens, most challenges are unsuccessful and most materials are retained in the school curriculum or library collection.

“It always amazes me because every year there are at least 100 books on what is considered the classics list that have been challenged, which is what you do first,” she said. “You challenge a book, and it goes before the board or whatever body, and if they decide to ban it they will proceed to do that.”

Cafeo also said there are a few gray areas with some books, due to content that is deemed offensive or graphic.

“A Clockwork Orange, due to its violent content and In Cold Blood,” she said. “The Lord of the Rings is on there too and a lot of the banned books have to do with religion. “The display is of the top 10 banned books for 2014 and I put the reasons why they were banned. I also included a list of banned and challenged classic books and it includes the Great Gatsby, Catcher in the Rye, The Grapes of Wrath and To Kill a Mockingbird, which are always high on the list.”

Cafeo said many of the reasons books are challenged at present can best be described as irrational and illogical.

Little Red Riding Hood was also challenged because the character carried a basket containing a bottle of wine, which some groups said “condones the use of alcohol.”

“I just like to observe Banned Book Week because it’s all about our First Amendment rights,” Cafeo said. “We at the library very strongly believe in your freedom to read whatever you want, and parents should be responsible for what their children read, not the library.”