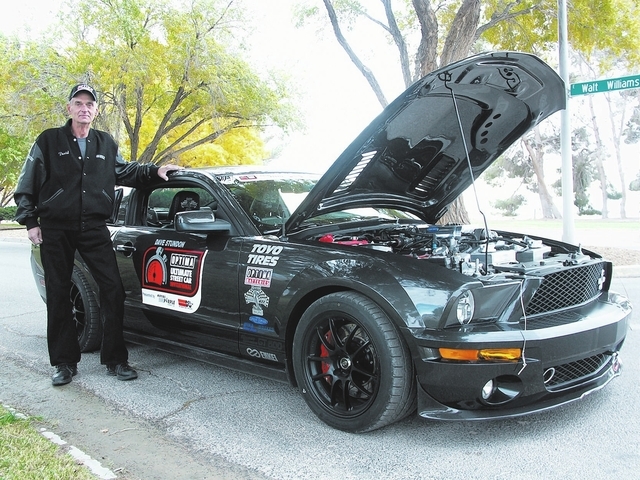 Promoter Jim McIlvaine considered it the greatest turnout ever for the past six years.

Saturday’s Ultimate Street Car Invitational attracted close to 60 enthusiasts from across the country along with several hundred spectators to Spring Mountain Motorsports Ranch in Pahrump.

The annual event allowed high performance street car enthusiasts to compete in a series of timed challenges with the overall winner claiming the 2013 trophy as well as 365 days’ worth of bragging rights.

McIlvaine said just about every type of muscle car was represented at the popular event.

“We had everything from a brand new Ford Focus ST, to Lamborghinis and Vipers. Of course we had the traditional Camaros, Corvettes and 1950’s era pickup trucks. We had a lot of really cool vehicles out here this year,” he said.

Out of the national field of 58, just one Pahrump driver was invited to participate this year.

Stundon said he and a few select others were invited to the event just prior to last week’s SEMA car event in Las Vegas.

“About 10 of us were chosen a few weeks before the show because we had nice cars and they wanted us in it and about 40 drivers from around the country had to compete to get in. I was racing my car in the Silver State Cup Challenge from Ely to Las Vegas and they saw me there and liked what I was driving so they chose me,” he said.

Though Stundon did not finish in the top three, he did say he was pleased just to be invited to compete.

Stundon placed 37th out of the 58 driver field.

“In order to be invited, you had to have done something right. It would not be a dishonor to be last because there are so many people who never get in,” he said.

Co-promoter Jimi Day said the event is a huge draw and the town benefits economically each year when the competition is held.

“I always have 50 to 60 phone calls asking for rooms in Pahrump because everybody wants to stay there. Everybody has been so gracious when we come out there. We really appreciate the opportunity to take part in what goes on in the Town of Pahrump. Even the local citizens come out to volunteer,” he said.

Day also said future events will allow those who are interested in competing to do so just as it did during the SEMA car show in Las Vegas this week.

“There’s a couple of ways to get invited. We have a qualifier series that we publish every year. It’s 10 events that are run throughout the country. Some can just win the event and we also give away a Spirit of the Event Award. If we find a car and an individual that really exemplifies the spirit of what our event is all about, we may issue them an award at our qualifiers. We also invite 10 cars right off of the SEMA showroom floor. We have 10 ‘Golden Tickets’ that we give out to people at the SEMA show,” he said.

The event was also filmed for television and will appear on a major national cable network in March.

*Third place was a tie; Per the rules, Todd Earsley earned the official third place because of his placement in the BFGoodrich Hot Lap Challenge.