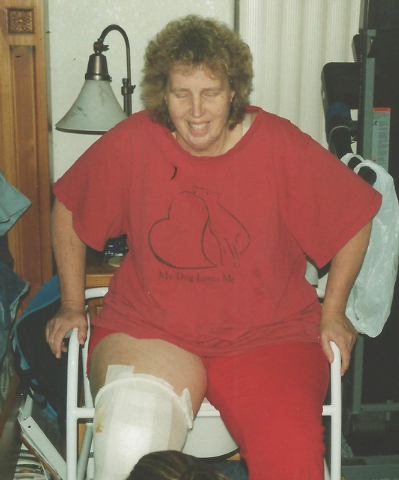 Local resident Victoria Brazzle will be crowned at the state conference of Take Off Pounds Sensibly (TOPS), a not-for-profit, non-commercial weight loss, support and education organization with chapters here.

The event will be July 26-28 at the Aliante Casino in North Las Vegas.

According to Brazzle, owner of the Quilted Dragon and secretary for Shadow Mountain Quilters, TOPS is not a diet, it is a lifestyle change for a lifetime.

“I’ve always had trouble keeping my weight in check. I joined TOPS in January of 2007 after having a knee replacement surgery. I had tried other weight loss groups but I just wasn’t motivated enough.”

She said her top weight was 310 pounds before she enlisted in the Navy. She said, “One year later I weighed 175.”

She couldn’t keep the weight off and although 175 or 180 pounds seems like a lot, Brazzle was 6 foot tall when she entered the military and stands at five foot, nine inches now.

“In 2011, I decided I just needed to buckle down and lose the weight, mainly for health reasons.”

Brazzle said after her husband passed away she became nervous about being alone. “What if I fell? It’s hard to get up. What if I needed help and couldn’t get to the phone?”

“I started writing everything down that I ate and walked one-and-a-half miles twice a day.”

Brazzle said withing a year, she was walking 200 miles a month. “I was walking from six to 10 miles a day and starting early in the morning when the temperatures became too warm.”

TOPS meetings are a source of support and motivation for Brazzle to keep the weight off. “I enjoy the weekly meetings. We discuss weight losses and gains among the members. It’s accountability.”

She said the organization is open to everyone. “We have members who are mostly over 50. There are a few couples and several young people.”

Brazzle said she has quite a collection of exercise equipment available to her. She uses a Bowflex, an elliptical and has both a stationary bike and a regular bike.

Something else she finds very useful is a calorie-counting app for her “fancy phone.”

There are any number of down-loadable applications for smart phones that do everything from tell people how many calories were in the fast food burger they just ate, to storing recipe ingredients to track the calories consumed from foods made in a home kitchen.

Brazzle said hers will scan bar codes from grocery items and tell her how many calories are in that product.

The local TOPS meetings are on Wednesdays. There are two chapters here.