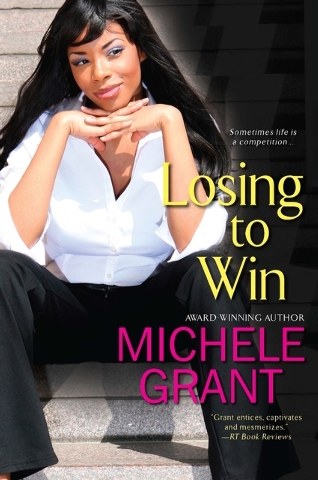 It’s always in the last place you looked.

You know how it is: you’ve lost something. You look beneath, above, in and out, corners and cabinets. You turn the house upside down but no matter where you look, it’s always in the last place you’d expect to find it.

It almost makes you lose your mind.

But there are worse things to misplace: love, for instance, and in the new novel, “Losing to Win” by Michele Grant, a loss might result in a bigger gain.

There was no other way to consider it: on the last day of school, while cleaning her classroom, she was called to the auditorium. That was never a good sign but on that day, it was doubly bad. Carissa learned that she’d been tapped to appear on a reality weight-loss show, along with several people from her past – including her ex-fiancé, the man she never wanted to see again.

Malachi Knight had been Carissa’s best friend. They’d been together since high school, but not long before the ambush, Carissa left him standing in his Houston mansion when she realized his NFL career was more important to him than she was. Her dreams didn’t matter anymore, which broke her heart so she broke it off.

But, of course, big ratings are the reason for reality shows and nothing would achieve that faster than putting two old lovers together. Because there were big bucks at stake, as well as help for her struggling Louisiana town, Carissa agreed to go along with the hot mess … but she didn’t have to like it.

When Malachi’s football career tanked due to an injury, he knew he had a lot of re-assessing to do. He’d lost his future, in more ways than one: no football, no Super Bowl, and no Carissa. He vowed to fix all three losses, and this reality show was just the ticket. He’d lose fifty pounds, get in shape, re-ignite his career, and get back with the woman he’d always loved.

Looking for something fluffy-light for your fall reading? “Losing to Win” may be what you need: it’s a classic boy-gets-girl romance that doesn’t let you know which boy gets the girl until the end.

That was a nice surprise, actually: author Michele Grant gives her strong main character lots of choices, including that of remaining single. In a romance, that’s unusual and here, it’s refreshing because readers know that Grant’s Carissa will be fine, no matter who she chooses (or doesn’t). Surely, you’ll have a preference for her, which is part of the appeal of a book like this.

Readers who are looking for a marshmallow will enjoy this book, and romance lovers will eat it up. If that’s you, then I definitely think “Losing to Win” is what to look for.