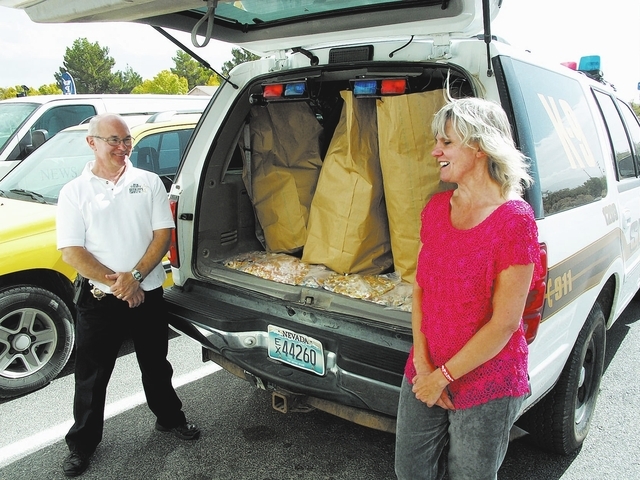 Disposal of unused or expired medications is not simple or safe if the solution is flushing it down the commode or putting it in the trash.

According the Food and Drug Administration (FDA), dumping prescription meds down the toilet may lead to adverse environmental consequences and FDA officials have noted trace amounts of medicines detected in water systems nationwide.

Just tossing them in the garbage is never a good idea either.

Both agencies collaborated on a remedy to assist community residents in discarding the drugs.

The units, which slightly resemble U.S. Postal collection bins, allow residents to safely drop off their drugs at several convenient locations in town.

So far, the units can be found at Desert View Hospital, the Pahrump Senior Center, Comfort Hospice on Postal Road and the newest location at Pahrump Pharmacy on Calvada Boulevard.

“We are trying to get boxes in as many central locations as we can,” NCSO volunteer Ben Gully said. “We thought the Senior Citizen’s Center and the Pahrump Pharmacy would be two good places to have these units because many of our older residents in town are on some type of medication.”

After more than five months, Gully, who empties the units each week, said he’s seen just about every type of prescription drug on the market, including drugs not exactly prescribed by a doctor.

“I get Tums, cough drops and everything. it’s okay, we sort it. If someone finds marijuana, we’ll come to their home and pick it up with no questions asked,” he said.

Prior to the Med Return campaign, the sheriff’s office would routinely pick up medications from those who call and Gully said that service is still being offered as well.

At present Gully said the Med Return unit at Desert View Hospital seems to be the most popular location by virtue of the amount of drugs deposited there each week.

“It’s our busiest box. I empty that box twice a week because they actually advertise the box is there. It’s good for us to get the drugs off the street. The unit is specially made for drug collections. They have titanium locks and we make sure the locations are secure enough to have them there. Nobody can just reach in and try to retrieve the contents inside,” he said.

For more information on the Med Return project or to have a box installed, call the Nye County Sheriff’s Office at 751-7000.