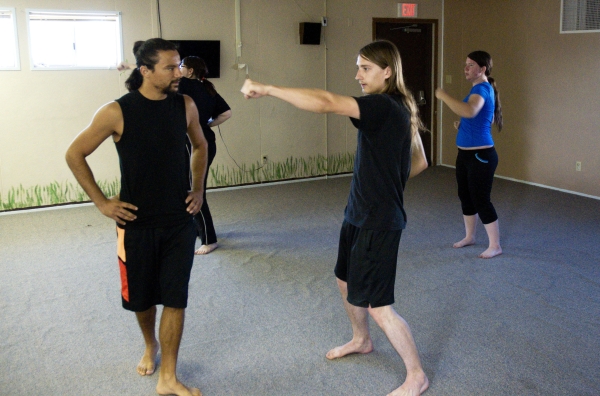 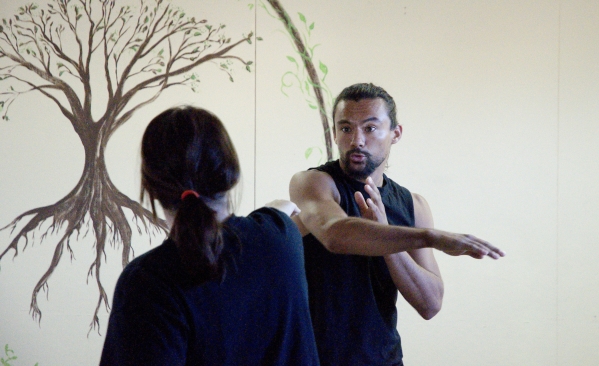 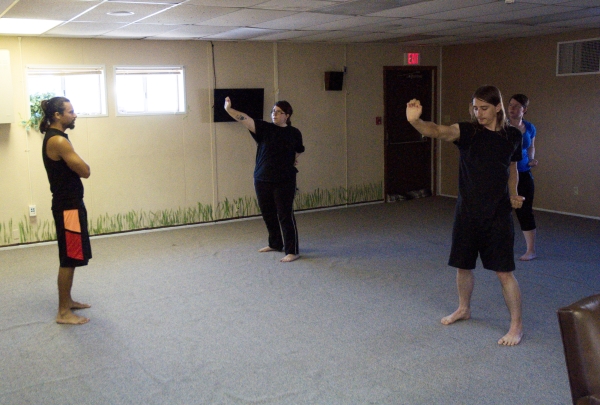 It’s 7 a.m. and your body is just waking up and there is no time for coffee. What can one do here in this small town to get your blood going before school? Have you ever thought of putting your chin on the heel of your foot? Andrew Gonzalez thinks this is a great way to wake up in the morning.

Gonzalez is best known for being an amateur mixed martial arts fighter who fights for Tuff-N-Uff in Las Vegas. The fighter is working on his second degree black belt at Dragon Cloud Dojo in Pahrump.

His day job involves working with at-risk youth for the Nye Communities Coalition.

Gonzalez wants to start up a free karate class for at-risk kids at Nye Communities Coalition and now he is testing the class, using adults at the coalition.

“I want the class to assist kids in our Youth WERKS (Work, Education, Responsibility and Knowledge) program,” he said. “The program currently helps at-risk kids with food, education and other life skills needed to keep them going.These kids are foster kids or homeless and most are low income. I just want to reach these kids because I was one seven years ago.”

He said the karate he will be teaching is aligned with the mission of the Nye Communities Coalition.

“It’s beyond karate and is all about connecting with the kids,” Gonzalez said. “I want to give them something they can own. I want to reach out to the kids on a personal level and give them a sense of belonging to a group.”

He said part of the coalition’s mission is to help people get off drugs, stop smoking or drinking and just dealing with addiction. Gonzalez believes his karate will instill discipline into their lives so they can deal with their demons.

“Martial arts is for everyone, no matter who the person is,” he said. “It is for the person who wants to do something to further themselves. It definitely will take their mind off the urges, and build self-confidence. Karate will also relieve stress.”

Gonzalez has seen firsthand how karate has helped people to stop smoking.

“I have seen smokers at the dojo where I train just quit,” he said

Gonzalez believes martial arts is all about wellness, encouraging wellness and taking care of your body.

“These are things that we are promoting at Nye Communities Coalition,” Gonzalez said.”That’s what we do here, promote wellness.”

He said his class will benefit youth from 16 to 21. The classes will be taught at the coalition.

“We are going through a test phase now,” he said. “I am using adults to test the curriculum and the curriculum and insurance is being approved now by the Nye Communities Coalition. I am sure it will happen and I want to start now, but I think it will get going sometime in the fall.”

Gonzalez has been busy writing the curriculum and adjusting the karate to fit the needs of the coalition.

“I had to make sure it fit in with the wellness theme and that it won’t be harmful to others,” he said. “This meant I had to clear everything with my sensei, Jose Hernandez, who is a master karate instructor at my dojo and of course the coalition.”

“I know of one kid that came to us from another state, he is a parent, lives with relatives, highest grade completed was eighth grade, but he wants to take responsibility for his actions,” Gonzalez said. “This is the kind of youth I want to help.”

The class will teach the basics. There will be oral tests on form and knowledge.

“The kids will be getting almost everything,” he said. “I feel the class will give the kids something with quick movements, which is something I needed. If it’s successful with the kids I will also try adults.”

Jesse Tarver has been taking karate from Andrew for about a year now and believes this will be a great program for at-risk youth.

“I have been Andrew’s guinea pig for this program he wants to do for a year now,” he said. “I really enjoy it and I think this will give the kids a different kind of discipline. A foundation in martial arts will teach them a positive view on physical strength and will teach them that violence is not the answer to everything. The youth will learn that the best way to win a fight is to avoid one.”