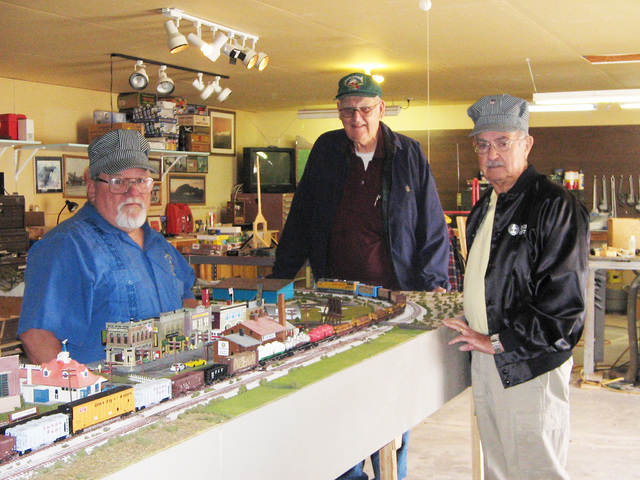 Members of a local hobbyist group are hoping to keep their interest on track with the youth in the community.

Member Harry Smith said the modules are typically four feet long and two feet wide, but they can be larger.

“Each module clamps to the next module and the wiring is all underneath, so the wiring is all hooked-up and we can put as many of these together as we want,” Smith said. “Basically, every module folds up and just walk away with them, so you can move them around.”

The members have been “working on the railroad” since they were kids. Frank Heyer started out with O scale trains, such as Lionel, which were very popular in the 1950s and 1960s.

“I really have a Lionel set that I got when I was 4 years old and I still retain that,” Heyer said. “And I used to set it up at Christmastime and so I’ve always really enjoyed working with trains. Then, when the guys got started talking about building modules, we all took and built modules. Some of us have got multiple modules. It’s basically whatever we can transport.”

The so-called O scale train is larger than the HO scale. In short, HO is half of O, for every foot, it represents 1/87 the size of a real train, according to Smith. The term gauge used by model railroad collectors refers to the width of the track.

Another modular member, Chandler Apt, declined when his parents offered to buy him a Lionel set as a kid.

“I didn’t like the Lionel because it ran on three rails, and I knew enough about trains to know that real trains run on two rails,” he said. So, he first started with an American Flyer which was S scale.

That is between the O and the HO scale model train. There are other scales (sizes) of model trains including N and Z which can be carried in a suitcase. A size suitable for every collector.

“Well, model trains, they kinda get in your blood, and they start early and that’s one of the reasons we’d like to get the younger kids to come out and see the train layouts,” Smith said. “It’s not just trains, because we model life. In other words, the train module that’s going over the bridge with the sawmill set up, we’re modeling life.”

Some of the scenes depicted on the modules can be built from kits or made from scratch.

“We try to make it as near to real life as possible with the trees, and buildings and all that,” Apt said. “If you look, you’ll see people walking around.”

Speaking of real life, Heyer has a live steam locomotive that he can engineer around in his backyard on four hundred feet of track. It’s 1/8 the size of a full locomotive. “All Aboard.”

Heyer has seen drastic changes in HO scale, the hobby from his childhood days.

Along with changes in technology for HO collectors, Apt has also seen increases in the prices and values of locomotives and rail cars. When he was a kid, Apt said you could buy a boxcar for $1 or $1.50. Today, that could cost $30 to $35. A locomotive back in the 50’s probably cost around $15 to $20.

Model railroading is called a “dying hobby” among his age group according to Apt since kids are now interested in video games. The group would like to change that.

The group sets up a full module display every other month at the Pahrump Community Library , 701 East St. They will be there Thursday and Friday, June 18-19 and hope area youth will come out to see their display which could spark an interest in the hobby.