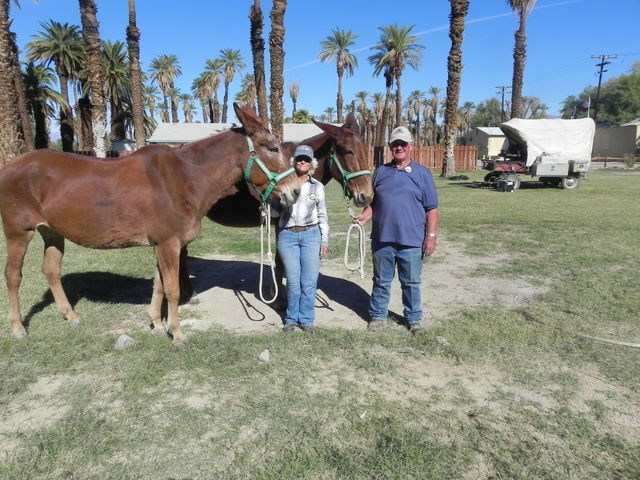 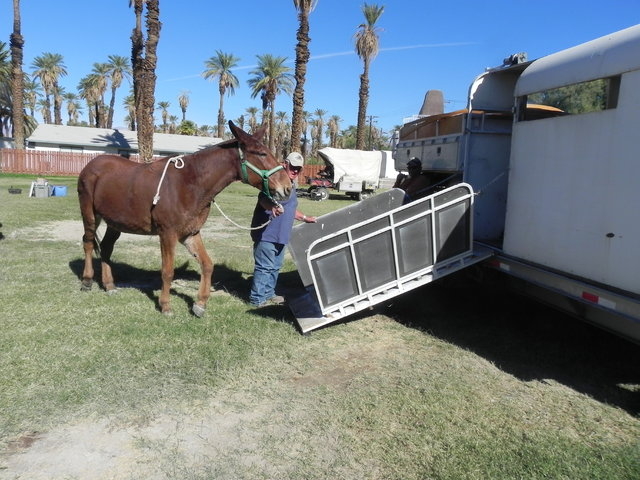 Modern-day motorists can make the trip from Pahrump to Death Valley in an hour, in air-conditioned vehicles, listening to music on the compact disc or perhaps guided by GPS systems on their iPhones.

But to a group of riders reenacting the 1849 wagon train journey, the trip takes two weeks on rigs pulled by mules, traversing through desolate desert country far from modern conveniences. People riding in the seven wagons enjoyed cookouts by the campfire under starry skies at night and quiet views of desert vistas during the day.

Asked why he enjoys it, Larry Jacobs of Palmdale, Calif., on his fourth ride, said, “the camaraderie and driving and being able to do it, saying you drove a wagon team through Death Valley and it’s become an annual event.”

The first mule train started in 1967. It was so popular, ending up at the annual Death Valley 49ers Re-enactment in Furnace Creek the first weekend in November, it was held almost every year after that.

The mule train ride this year was dedicated to a former trail boss who died, Bill Burke, and Death Valley National Park worker Charles Caha, who died Sept. 19, 2013 after he had a flat tire on his road grader while grading West Side Road. The radio wasn’t working and he died of heat exhaustion trying to walk for help.

The mule train, called Corral 14, left Fred and Cathy Cressler’s farm at the far south end of Homestead Road in Pahrump about 9 a.m. Oct. 28. They traveled through the dry lake bed and on to Resting Springs, well away from the Tecopa Road, crossing the Old Spanish Trail three times.

“We had one layover day, Tule Springs we had the layover day where everybody rests, the animals rest,” Jacobs said. “It was real good. We had a couple little windy days, but other than that it was beautiful, nice nights. We didn’t have any problems with the animals, I had one that’s a little sick.”

At Tule Springs a group of about 40 people, including the Death Valley 49ers, a group dedicated to preserving the history of Death Valley, came out for a big potluck dinner around the campfire. Musicians provided entertainment and a cowboy poet.

After camping out at Tecopa, Calif., which Jacobs said was about a 55-mile ride from Pahrump, the mule train rode the last five miles into Shoshone, Calif. where they rode in the parade for Old West Days on Saturday, Nov. 1.

Jacobs said they traveled about 12 miles per day. “I think we had one day, the long day here was 18 miles. That didn’t seem that long, in fact the 18-mile day didn’t seem any longer than the five-mile day coming up here,” he said.

Another driver on the mule train, Ron Remy, from Leona Valley, Calif., who’s been on the ride since 1999, said riding in for the parades are a little stressful. They also rode in the parade for the 49ers encampment at Furnace Creek Friday Nov. 7.

“If anything happens people do get run over, you’re really uptight, got your team really uptight at the controls so you don’t have any problems with the crowd,” Remy said.

“The government was about to shut down. They didn’t have the funds, the grader operator passed away and they didn’t have anybody to take his place. That’s the reason the road didn’t get graded,” Remy said.

After the first leg this year, the drivers shuttled support vehicles from Shoshone to Furnace Creek Sunday, Nov. 2 and shuttled the animals to Desolation Canyon, where they began the final ride down to Furnace Creek. This year, Remy said the National Parks Service actually escorted the mule train caravan from Shoshone, Calif. to Desolation Canyon.

Jacobs said preparation for the ride begins a month in advance.

“We start conditioning the animals, start driving them. Ron and I live fairly close together, so we drive every day. His wife does a lot of preparation beforehand, a lot of casseroles and things like that, freeze them up, then we have a freezer in the support truck,” he said.

They have to transport hay for the animals. Remy said the hay has to be weed free because of the national parks and national monuments.

A two-week ride gives the drivers a lot of time to get acquainted with their animals. Jacobs was asked if the mules were stubborn as their reputation implies.

“I don’t know if they’re stubborn or smart. They kind of seem to have somehow, some sort of weird logic. I don’t know what it is. They tend to outsmart you or if you think you’re outsmarting them, they tend to know how to resist,” Jacobs said.

“They’re stronger than horses, more endurance and they get along on less feed and they’re more disease free than horses,” Remy said.

He said the original 1849 wagon train used mules, horses and oxen, of which oxen were the No. 1 preference.

But hearing of the horrors of the Donner Party in the Sierra Nevadas, they heard of the Old Spanish Trail and headed south but they didn’t have any information about previous journeys on that trail.

The wagon train was tired of the slow pace set by Capt. Jefferson Hunt, leader of the San Joaquin Company when a young man rode into camp and showed a hand-sketched map detailing a shortcut to a place called Mount Walker. Twenty wagons went on their own, traveled west through Panaca, Nev. and Groom Lake, arriving on Christmas Eve at Travertine Springs, the source of water for Furnace Creek.

Jacobs said there were a large variety of mules on the trip this year. Remy used Percheron mules while Jacobs said his mules came from Tennessee walking horses.

The route next year is unclear, after mule train leader Norm Noftsier steps down. Jacobs said they will make the same run, but he doesn’t know if they’ll start out in Pahrump or farther west at Wades Monument near California Highway 127.