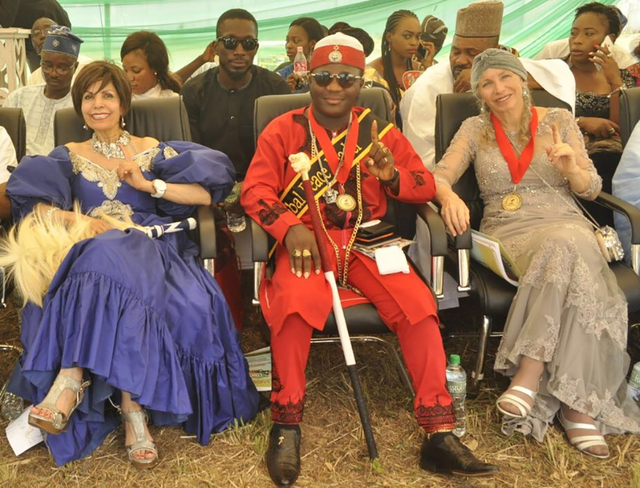 Pahrump’s Pepper Jay, on right, is pictured with Queen Munni Irone and Emperor-Alafia Adeoba Amitabha Shalom on an Arts 4 Peace Awards mission in Nigeria. Jay is an American Ambassador for the Arts 4 Peace Awards. The program was started by Irone, a Beverly Hills’ humanitarian, speaker, author and producer. The mission of the program is to promote peace through artists around the world. Special to the Pahrump Valley Times 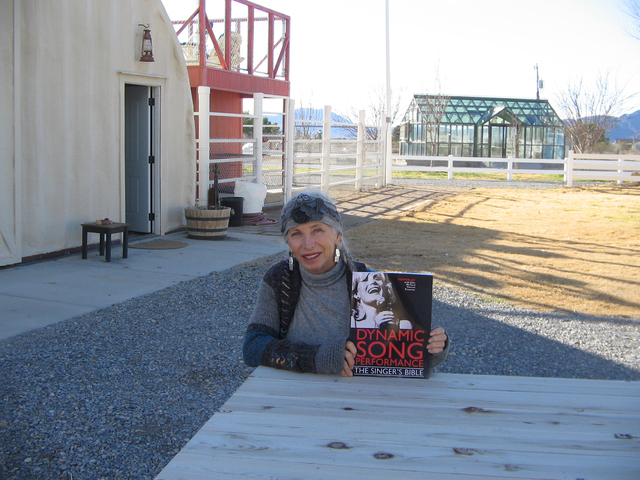 Entertainment guru Pepper Jay with her book, “Dynamic Song Performance: The Singer’s Bible”, which is described as a self-help guide, not only for singers and performers, but for anyone who has to speak or give a presentation before an audience. The book is available through Amazon.com and in most bookstores. Brenda M. Klinger/Special to the Pahrump Valley Times

The red carpet and glitz of Hollywood will be in the spotlight on Sunday for the Academy Awards.

Pahrump resident Pepper Jay has been there and certainly knows all about the glamor and allure of the entertainment world and Tinseltown.

Pepper Jay has been described as an entertainment guru from her extensive history as an actress, movie director, television producer, public speaker, singing and acting performance coach, and author.

Her life-long commitment to the arts now has her traveling the world as an ambassador for the Arts 4 Peace Awards, described as “a collective celebration of the arts of every culture around the world.”

The purpose of these awards is to demonstrate to each nation how vitally important their culture is to the whole fabric of our world.

This is just a snapshot of her accomplishments which could probably fill most of the credit space at the end of a television or movie production.

Jay moved to Pahrump in 2015 after buying a five-acre ranch, but discovered the town about 10 years ago, quite by accident.

After finishing an entertainment project in Las Vegas, she planned a return trip to Los Angeles on Interstate 15, but heard about a traffic accident and detoured onto Highway 160 through Pahrump, Shoshone and Baker, California. Jay said she was impressed with the beautiful mountains and the valley.

Pahrump is a far cry from Hollywood, but she was smitten.

“I love it here,” Jay stated. “I like the people, I like the camaraderie. I like the weather. I love that it (Pahrump) has so many veterans in it.”

Jay, born and raised in the greater Los Angeles area, has quite a background and ties to the world of entertainment since she was very young.

She described her grandmother as her best friend as a child, and the late Sophie Tucker, singer, actress and Vaudeville performer, aka “The Last of the Great Red Hot Mamas” was Jay’s grandmother’s best friend.

Tucker and Jimmy Durante used to perform opening acts for the Rat Pack.

“I spent much of my lifetime, as a child, watching them perform,” Jay said, in the Moulin Rouge, the Coconut Grove and other Vegas casinos.

She became an entertainer at a young age by tap dancing, playing the accordion, and performing in plays. Jay also starred in “The Real McCoys” sitcom, which aired from 1957-1962.

Jay mixed academia with entertainment and acquired a lifetime teaching credential from the state of California after graduating from San Diego State University.

She taught in the public school system for over a decade and earned a law degree from the University of San Diego School of Law, practicing as an attorney for over 30 years.

As a well-known teacher and performance coach, she trained many singers, actors, speakers and other on-stage artists.

Ferrari is an accomplished singer, songwriter, producer, photographer, author and performance coach in his own right, having been mentored by Jay.

Jay also publishes “Actors Reporter,” an entertainment trade magazine featuring an inside look at working actors and actresses in the industry.

Her latest publication, with contributions by Ferrari, is a book entitled “Dynamic Song Performance: The Singer’s Bible” which she described as a self-help book for singers, or anyone who performs before an audience.

“I think it will help someone that has to speak to people whether you’re a teacher, or a lawyer, or just a public speaker, or even kids that have to stand in front of their class and give a report or something.”

Some of Jay’s and Ferrari’s students mentioned in the book include: rock singer Allison Iraheta, Top 4 “American Idol”, season 8, who currently sings lead with the band Halo Circus; teen opera soprano Golda Berkman, who was honored at the Grammy Museum; country singer Brandon James, named by “Music Connection Magazine” as one of the Hot 100 Unsigned Artists of 2011/2012; and Montana Tucker, hip-hop singer and dancer.

The book is available at Amazon.com and in most bookstores.

Another one of her works in the making is a feature film “Complete or Repeat”, which is in post-production and should be released sometime this summer at film festivals. It was filmed in Pahrump with some locals under the direction of Jay and Ferrari and produced by Pepper Jay Productions.

Over the years, Jay has either produced, directed and/or starred in several films including “Hercules In Hollywood”, “Women Warriors”, “Marked”, “Midlife”, and “Brooklyn USA”, among others. She will have a supporting role in “Complete or Repeat”.

She recently traveled to Nigeria and Israel in another role, as an American ambassador for the Arts 4 Peace Awards, giving a keynote speech, “Peace Begins With Me”.

The awards program, created by Munni Irone, a Beverly Hills humanitarian, speaker, author, producer, and philanthropist, strives to bring together artists of all types from around the world to promote peace and unity through the arts.

“The purpose of these awards is to demonstrate to each nation how vitally important their culture is to the whole fabric of our world,” according to the organization’s Facebook page.

In late 2016, Jay was honored with the Entertainment Award at the Annual Diamond Rose Awards presented by the Multicultural Motion Picture Association of Beverly Hills.

“What I enjoy most besides my grandchildren and my animals is producing music,” Jay said. “I just love to produce music for TV or films, especially for artists, helping them with lyrics, the arrangement and the instrumentation. Music to me is very therapeutic. I don’t even care what genre, I just enjoy very much creating music.”

More information about Jay can be found at her website: www.PepperJay.com.