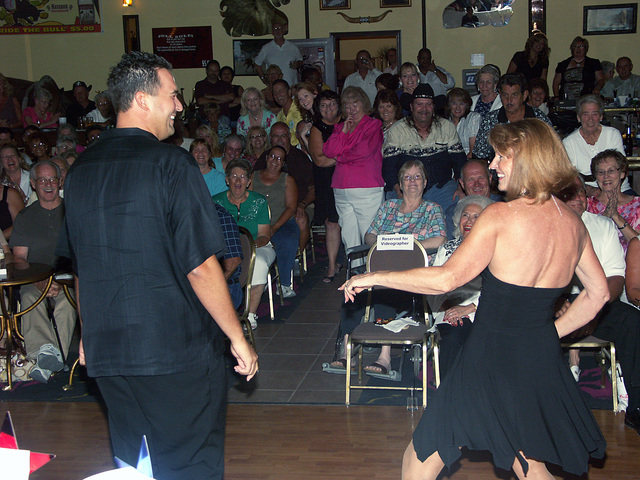 The third annual “Stairway to Heaven Dance Competition,” in memory of Dr. Dennis G. Campton and benefiting “Friends of Pahrump Valley Nathan Adelson Hospice Building Fund, is just around the corner. The event time is Saturday, Oct. 4, 2014 from 4 p.m. to 7 p.m. at the Maverick Saloon and Dance Hall on Mesquite Avenue. Pricing for the event is $20 per person which includes not only entertainment, but also pizza, salad and a beverage.

The former events were called “Dancing with the Stars,” but only the name has changed.

Construction for the new hospice building is expected to get underway in approximately three years.

When the organization raises $1.5 million, construction will get underway, and Nathan Adelson would provide the remaining $500,000 in funds needed.

“The building is very much needed out here in Pahrump Valley. Most in need, have to travel to Las Vegas,” said Friends chairman Sharon Calhan.

This year’s gala will start with master of ceremonies Dondino delivering a greeting. Various local political candidates will be delivering speeches highlighting campaign agendas and points of interest. Dondino will fill in the breaks with selected tunes throughout the evening.

There will be a door prize raffle for an automatic garage door opener donated by Overhead Doors. Contributing to the atmosphere is a special banner created by Quality Signs placed over the stage. The event will be judged by five mysterious prominent figures residing in Nye County and Pahrump.

There are seven dance “Star” competitors consisting of four males, three females, and their partners who will be choreographing and teaching the dance routines to their “Star” dance partners.

The dance competition is a closed event with competitors prescreened.

The dance lineup goes as follows:

Sponsorships are still available to those wanting to be showcased in the event program. Levels of sponsorship are platinum at a $500 donation, gold at $200, silver at $100 and bronze at $50. There is also business card advertising at $25 per card placed in the program.

All donations must be received by September 29 to assure sponsorship listings in the program.

Send donations and advertising request to:

A “Thank You for Your Donation” letter will be sent for tax purposes.