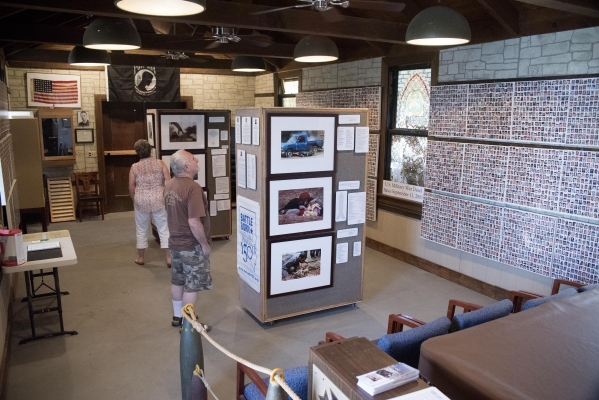 BEATTY – “Always Lost; A Meditation on War” is on exhibit at the Beatty VFW Post until Nov. 12.

The nationally touring exhibit features photos and names of U.S. service members who have died in the Iraq and Afghanistan wars since September, 2001.

The exhibit’s name comes from a statement of writer Gertrude Stein: “War is never fatal but always lost. Always lost.”

Focusing on the cost of war to individuals and the nation, the exhibit also features Pulitzer Prize-winning combat photos from the Iraq War by photojournalists David Leeson and Cheryl Diaz Meyer; literary works by Western Nevada College writers, veterans and their family members, and others; statements about war from various sources from Greek philosophers to modern generals.

The exhibit started as a classroom project at Western Nevada, but has become what one visitor called “a national treasure,” and a memorial to those who answered the call to serve, never to return.

Representing another toll the war has taken on many veterans, the exhibit also includes the profile and poetry of Noah C. Pierce, who took his own life after serving two tours in Iraq.

Another visitor observed, “You could not possibly leave this exhibition the same person you were when you walked in.”

Post Commander George Wehrly said, “We are humbled to honor those who sacrificed it all. This post has many members who have served in the Gulf wars, including Iraq and Afghanistan. We feel our meeting hall is the perfect place to display the ‘Always Lost: A Meditation on War’ exhibit.”

Viewing hours are from noon until 10 p.m. daily. The post is located in the former Episcopal church, 300 West Main St. in Beatty.