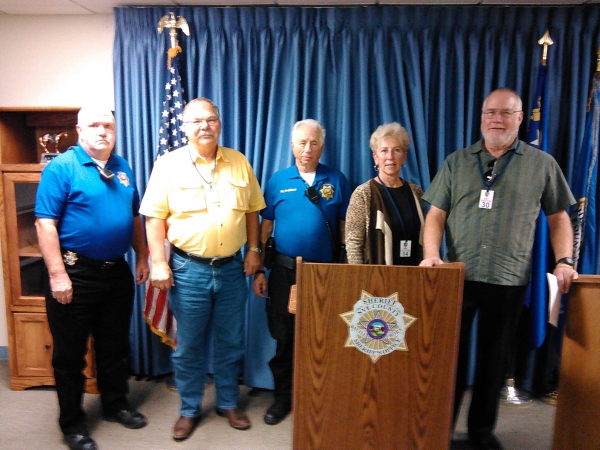 Neighborhood watch groups are getting a renewed focus after years of relative activity by the Nye County Sheriff’s Office.

The nationwide program is being locally re-established by members of the community under the guidance of the Nye County Sheriff’s Auxiliary.

He noted that his home was recently the target of would-be thieves.

“I got hit last March thinking that my property was quite secure,” he said. “I found out there were other neighbors that got hit and I thought this would be an ideal time to start up a real neighborhood watch and get it coordinated.”

Underhill is already generating support among his neighbors, who he said are willing to devote a little time each week keeping their eyes peeled for potential problems in their neighborhood.

“Even the ones that didn’t get hit are interested in joining,” he said. “Pahrump is a very unique place because it’s got a lot of veterans and retirees, as well a lot of people that live alone and all of them are vulnerable. They have all of their stuff inside their homes.”

Cindy Kluesener recently became a member of the sheriff’s auxiliary.

She said a renewed program can also provide a sense of protection and safety to area residents.

“We have an elderly woman who receives Meals on Wheels and she’s all by herself,” Kluesener said. “She never comes out, and there’s another neighbor that checks in on her so I think that’s important for people to keep that in mind throughout the community. If you know somebody who is living on their own, give them a call every so often to make sure their air conditioning or heating is working and they are okay.”

Sheriff’s Auxiliary member Roland Benton said deputies and auxiliary members are working on statistics regarding areas where crime rates appear to be on the rise.

“We have the information and we are now getting to a point where we can use it to determine where the crimes are being committed and what’s the highest frequency,” he said. “That information is not only going to be used by the sheriff’s department, but it will be worked into the Neighborhood Watch Program.”

The Neighborhood Watch Program does not only focus on potential crime in the community.

Underhill said if there is a water main break or other public safety issue, residents should report those as well.

Additionally, Benton said they want to instill within the community that it’s okay to report those instances and do it in the most time-efficient manner.

“We are bringing it all together but it seems that we are starting from scratch,” he said. “People who get on board are going to have input into what this program is going to be. I’ve talked to some other neighbors and they were more than willing to give a little bit of their time each week to keep an eye out for their neighbors.”

The auxiliary unit does have support from at least one local retailer.

Underhill said Home Depot has volunteered to provide materials the auxiliary will need for putting up signs and making the Neighborhood Watch Program prevalent in town.

“Theresa from Home Depot told me to make up a list of the materials that are required,” he said. “I completed that list and asked for a couple of signs and a couple of poles and she is ready and willing to help.”

Jim Kaszuba is a new member of the auxiliary.

“I want to see what we can get started at the Desert Trails subdivision where I live,” he said. “Right now everything is on the ground floor and there’s a lot of planning that needs to be done. The Neighborhood Watch Program is great for any community. The experiences that I had when I was a police officer shows it solves or prevents a lot of crime.”

Benton, meanwhile made sure to point out the Neighborhood Watch Program and the auxiliary program are completely separate from one another.

“The Neighborhood Watch Program comes under the auxiliary’s umbrella, but they are not out in the cars patrolling in uniform,” he said. “They would basically be the eyes and ears of the neighborhood. We want people to work within the scope of their training and the law so we will educate them on what they need to do and what they should not do, unlike some other communities where they have had some bad outcomes.”

Anyone who is interested in taking part in the renewed Neighborhood Watch Program can contact Underhill, at (702) 613-1112.

“They can leave a message and I can contact them back,” he said. “This is for anyone who is interested in being involved in the Neighborhood Watch Program.”