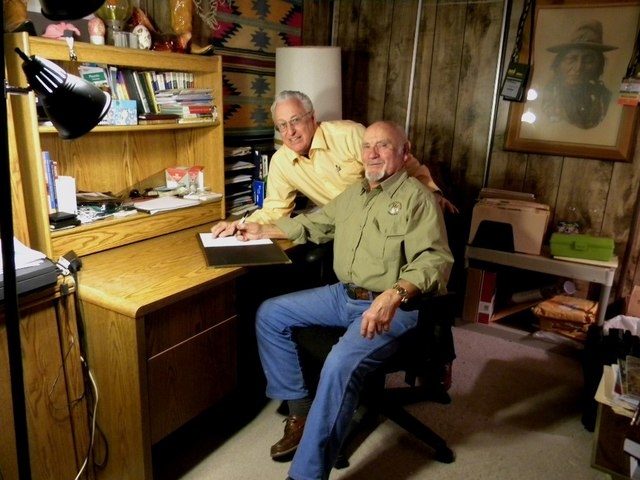 This has been an exciting year for outdoor conventions and banquets, with new equipment and opportunities in every aisle. But, there’s more to these events than stuff and making new friends.

My friend and mentor Chris Klineburger, an internationally recognized hunter, explorer, conservationist and author tells us the rest of the story.

You’ll be hearing more from Chris as we follow the “Sportsman’s Quest.” — Dan Simmons.

The professionals that guide hunters and fishermen in North America have been working hard spring, summer and fall. Seasons closed, horses in winter pasture and boats in dry dock, it is time to take a break. What do they do? Take a break? No, they go out to promote their business and get bookings for the coming seasons.

Where do they go to do that? Nevada.

The above scenario relates to all of the Northern Hemisphere, as well as sporting destinations in earth’s southern extremities, where it is summertime and can get real hot and often experience monsoon rains. Well, once the holidays are over, to the nimrods worldwide, winter has become the “Convention Season.”

These conventions have thousands of exhibitors, many of which are professional outfitters from all over the world. Likewise, sportsmen attend them from everywhere. The ultimate purpose of the two groups of sportsmen is to raise money for conservation of the wildlife that they pursue. And money they do raise: many, many millions of dollars at each convention.

I recently asked the Wild Sheep Foundation how much they raised this year. They were still working through the numbers but expected it to well exceed last year’s $4.3 million. They did say they raised over $200,000 along with their Wounded Warrior Partners for their programs, where they share outdoor experiences with wounded veterans. They also said that the Montana bighorn sheep tag auctioned for $320,000. Most states that have wild sheep populations offer special sheep tags to the foundation for auction at the annual conventions. The money received is redirected back to the respective state for on-the- ground conservation programs. The foundation’s motto is “To Put and Keep Sheep on the Mountain.”

The 1,100 exhibitors represented 559 hunting and fishing guides, and outfitters from around the world, 55 world-renowned artists, 67 gun makers, 34 outdoor-related products including jewelry and over 100 taxidermists that exhibited beautiful wildlife throughout the 572,000 square-foot convention floor.

It took all four days to experience it all, including the many seminars and auctions and brought millions of tourist dollars to Southern Nevada.

Wild Sheep Foundation and Safari Club International are just two examples of major conventions, but there are many conservation organizations within Nevada that contribute to on-the-ground efforts to propagate the wildlife for everyone to enjoy.

Some other groups that have miniconventions or fundraisers here in Nevada are the Coalition for Nevada’s Wildlife; Wildlife &Habitat Improvement of Nevada; Las Vegas Woods &Waters Club; Nevada Bighorns Unlimited; Nevada Sportsmen Unlimited; and the Fraternity of the Desert Bighorn. Most all of these conservation organizations have very little overhead and are staffed by volunteers. Of the Las Vegas based clubs, Nevada Sportsmen Unlimited had their fundraiser at the Gold Coast in January, and the Wood and Water Club just had theirs at the South Point on Feb. 28.

Yet coming are the fundraiser for the Wildlife &Habitat Improvement of Nevada (www.whinlv.org) on March 14 at the Gold Coast, and the Fraternity of the Desert Bighorn (www.desertbighorn.com) on May 16 at the South Point.

Anyone interested in conserving wildlife should consider attending these fun events and get involved with these hardworking groups that are looking out for the wildlife for everyone to enjoy.