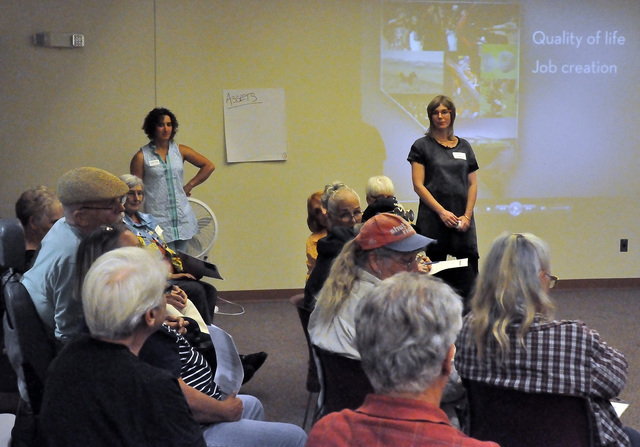 Creating a community “rich in culture” was discussed at length last Tuesday during a special meeting at the Pahrump Community Library attended by more than 40 area residents.

Officials from the Nevada Arts Council and the Pahrump Arts Council said their primary focus was to locate a facility to call home in Pahrump.

PAC President Loretta Lindell said the organization has been saving money over the past several years to fund the proposal.

She also noted that the Nevada Arts Council is also on board.

Additionally, Lindell said the Pahrump Arts Council’s mission is to create an environment for the arts to flourish in the community.

“There was a movement and they would like to create a central location for the arts and what’s going on in the community so that people can participate,” she said. “The Nevada Arts Council people took all of the information with them and they will digest it and get everything back to us. We should be hearing from them soon.”

During the meeting, attendees broke into small focus groups.

Lindell said there was a consensus among the participants to also establish a Pahrump Performing Arts Center in town sometime in the future, but securing a new council office is first and foremost.

Over the years PAC has sponsored numerous visual arts performances without a permanent performing arts venue.

Many PAC members are visual and performing artists in a variety of media, including fiber arts, singing, dancing, drawing, painting, writing and poetry.

One upcoming production is the Missoula Children’s Theater, which is coming up on Nov.28, through Dec. 3, thanks to a recent grant from the Nevada Arts Council.

“Great Basin College is talking about, if and when they build their facility, it would have a performance space,” she said. “Right now we have used a number of performance spaces around town, namely the Pahrump Valley High School auditorium, which is a very nice venue. Most of the elementary schools now have a stage, so there are staged facilities within the community, unfortunately, we can’t always use it only as our own.”