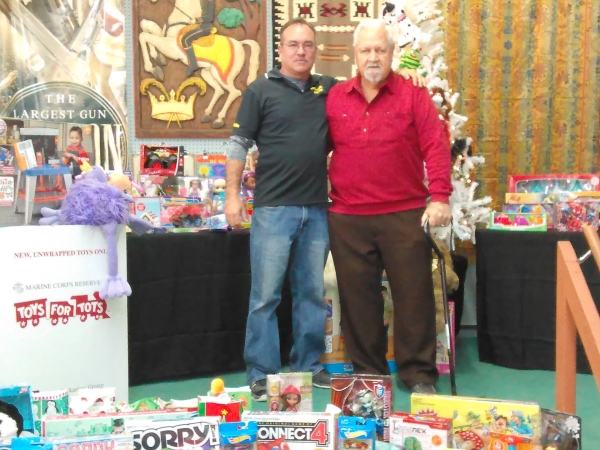 Nevada Public Auction owner Ron Chase once again wanted to help provide a memorable Christmas for some of the valley’s less fortunate families, as he has for the past 10 years.

Last year Chase decided to hold a customer appreciation party and urged attendees to bring along a toy.

His idea netted dozens of toys for local children.

This year so far, Chase has received more than 100 gifts and counting.

He said the auction teamed up with the local Toys for Tots organization for the drive.

“So far we have about 150 toys or more, which is a number that surpassed last year and that makes me very happy,” he said. “Hopefully we will get 50 or 60 more before the drive is over. I asked the customers who were invited to the party to bring along a toy and they would receive a raffle ticket for a special prize and we also had a 50/50 drawing along with a silent auction.”

Chase said several churches and organizations in town give a list of families in need to the Toys for Tots organization for equal distribution.

“We just want to make sure that the limited amount of toys we have goes to a lot of different families,” he said. “That way, we don’t have one family getting an overabundance of toys compared to another.”

Toys for Tots Coordinator Richard Hoery said though he’s pleased to see people are providing gifts for those who are less fortunate, he’s noticed a dip in the number of toys the organization has received compared to previous years.

“I’ve been doing this for eight years and in previous years, we would provide at least two toys for each child,” he said. “This year we will provide one large toy and then we will try to give them some stocking stuffers to make up for the toys that we don’t have so they will have some kind of Christmas.”

Hoery also noted the organization will receive donated toys up until Christmas Eve this year.

“Any toys are greatly appreciated,” he said. “We would prefer to have them new in the box and unwrapped. Once the toys have been gathered we will deliver them to the No To Abuse organization. The parents seem just as happy as the kids, because when the kids are smiling, they are smiling too.”

Chase, meanwhile, gave thanks to Wendy Black, owner of the Coyote’s Den on East Kellogg Street, who provided a venue for the customer appreciation party.

“The customers all seemed to have a great time and they were generous with their donations,” he said. “This is the time of year where a lot of families in Pahrump need assistance. We’re a small rural town and we all live here and have a vested interest.”

Toy donations can still be made at Nevada Public Auctions, located at 800 Margaret Street.