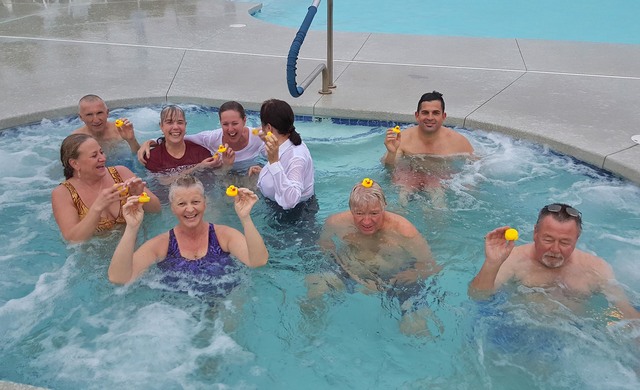 While most residents in the community were seeking the comfort of warmth after winter storms rolled through the valley more than a week ago, there were others who had opposite thoughts.

Recently, representatives of Pahrump’s Wine Ridge RV Resort and Cottages challenged area residents to jump into the freezing waters of their swimming pool as a fundraiser for Pahrump’s No To Abuse agency where more than $400 was raised.

Organizer Lynn Peterson said out of the roughly 50 people who showed up for the event, just nine brave souls decided to embrace the challenge on Friday, Jan. 20.

She noted the weather conditions on that day just added to the excitement.

“Because it was raining cats and dogs and so foggy and cold, I think it made it even more fun,” she said. “A lot of people stayed in the clubhouse but I would say we had about 20 people that came out to observe the plunge. They all stood underneath the eaves of the pool.”

Rules for the plunge were simple, as the participants were required to jump in the water and grab one of several floating rubber ducks placed in the pool.

Those who completed the task earned a $20 gift certificate from Pahrump Valley Winery.

Daytime temperatures at the time hovered in the low to mid-30’s.

Peterson said all of the plungers had identical reactions after diving in the pool.

“They were all gasping for air,” she said. “The plungers who jumped in and grabbed a rubber duck got out and immediately ran right over to our lovely Jacuzzi that was set at 102 degrees. They were in the pool for as long as it took to grab a duck. There was one person who actually jumped in twice. I’m thinking he must have been from Minnesota. Everybody talked about how refreshing and how much fun it was to do it.”

Following the plunge, participants and observers were treated to a meal and warm libations, followed by entertainment.

“We had hot drinks and hot soups for them and after the dinner, we began the dancing and karaoke,” she said. “Everyone had a blast and No To Abuse’s Executive Director Sally Kerr was here and we were able to raise over $400 for the nonprofit agency.

As a result, Peterson said the resort plans to fashion the Polar Plunge into an annual event in the community.

“This first Polar Plunge was a total success and we had a total of 50 people who came to watch the event,” she said. “We plan to do this every year to support a different local organization or agency. Those who came to just watch the plunge also donated, which was very nice. It could not have been more fun, especially with the rain, the fog, and the wind. Everyone was just laughing and had a great time.”