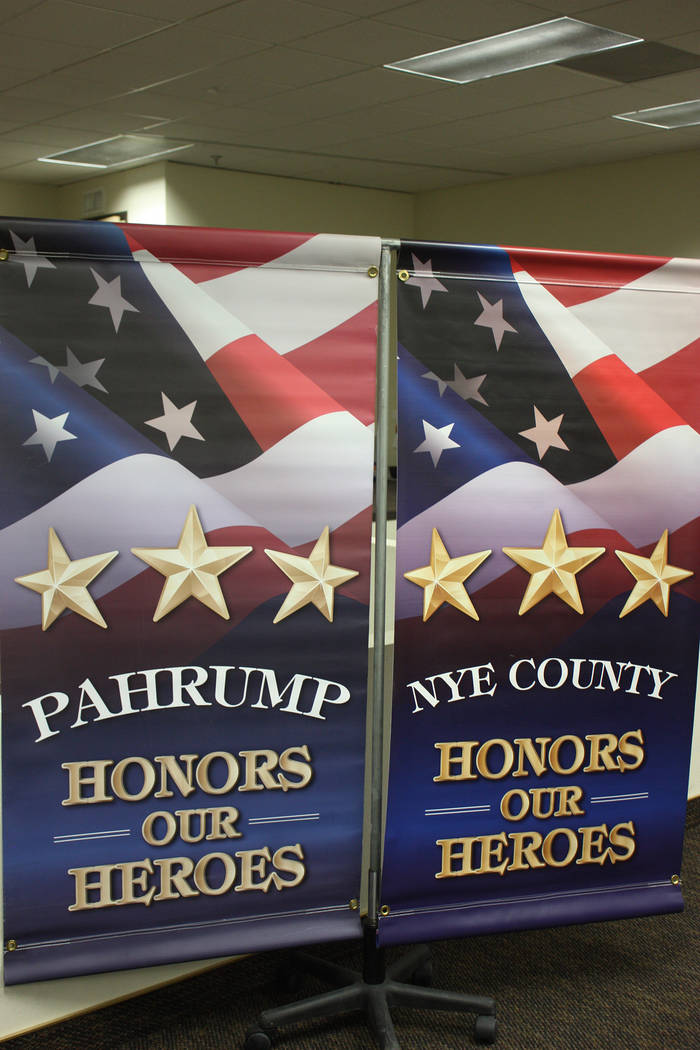 Robin Hebrock/Pahrump Valley Times The banners declaring Nye County and Pahrump's support for veterans were on display during the ceremony to celebrate the launch of the Nye County Veterans Banner Program. 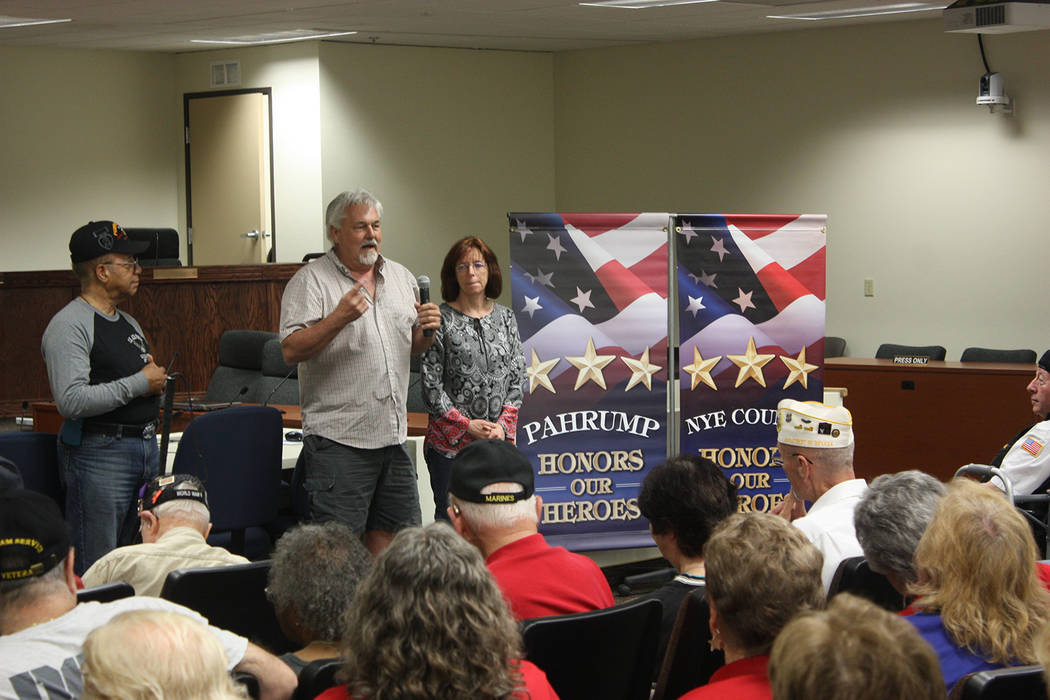 Robin Hebrock/Pahrump Valley Times From left to right are Dr. Tom Waters, Ron Wright and Debra Wright, three of those involved in bringing the veterans banners program to the county. 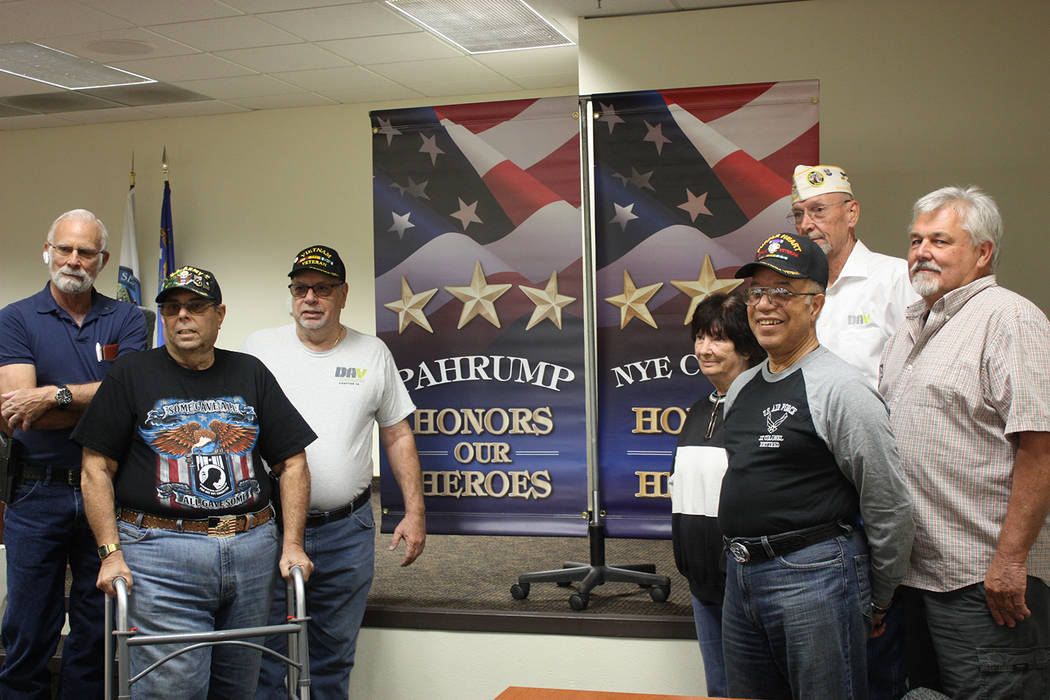 “Nye County Honors our Heroes” is now emblazoned on the Pahrump community and residents and visitors alike can take in the display that proudly proclaims this along Calvada Boulevard.

In celebration of the momentous start of the Nye County Veterans Banner Program, a ceremony was held on Monday, April 2 at the Calvada Eye, where the Nye County Commission Chambers is located. Dozens gathered together to commemorate the occasion, which marks just the beginning of what program organizers hope will continue to rapidly expand.

Through collaboration between local veterans organizations and Nye County, the Nye County Veterans Banner Program honors the men and women who have or currently do serve in the U.S. armed forces. As it stands today, the county is prepared to hang a total of 40 double-sided banners, rather than only 20 as previously reported.

With two banner spaces dedicated to proclaiming the county and town’s honoring of its veterans, there are 78 remaining spaces that can feature the name and face of a service person.

As of Monday, a total of 21 veterans had already been recognized with their banners hung on light poles on Calvada Boulevard, meaning there are dozens of additional spaces that must be filled.

One of the main focuses of Monday’s ceremony was raising awareness that the application period is still open and all Nye County veterans are encouraged to submit their names.

Opening the ceremony was Nye County Commissioner Butch Borasky, who initially brought forward the idea of banners through the American Veterans Foundation of Pahrump.

However, he was quick to point out two others who were major contributors to the effort, Ron and Debra Wright.

“We have a young lady and her husband over there who are the ones that really drove it…” Borasky said, indicating the couple in the audience. Dr. Tom Waters, chair of the Veterans Finance Committee, agreed and noted, “There were a lot of people that helped make this happen.”

“It’s so important to recognize our veterans and service men and women for all that they do and all they have done. And that is why we have the banners, to recognize this throughout Nye County, to say ‘We thank you for your sacrifice, we thank you for your service,’” Waters told the crowd. “And now I will introduce Ron and Debra Wright because they are the ones who were able to make this happen.”

Ron explained that he and Debra’s involvement began a couple of years ago when, as the founders of Homeless Veterans Solutions, a DBA of Homeless Response of Nevada, they attended some local veterans organization meetings. Through their networking with the American Veterans Foundation of Pahrump, they eventually connected with others wanting to see the banner project put into action.

The couple stepped forward and took charge, handling much of the footwork necessary to bring the idea to fruition.

They found a Nevada-based vendor for the banners, began working with Nye County officials to secure county-provided funding, prepare the legal documents and process the applications and now they are celebrating the enormous success of the program.

“It was pretty easy because Deb and I have been doing this kind of work for a long time, helping folks. We are also trying to work on other veterans’ issues as well, including a tiny home project and we are also going to approach the commission about a project to get service dogs for veterans,” Ron explained, giving attendees an overview of what Homeless Veteran Solutions is all about.

He also noted that he and Debra have their eyes on expanding the banner program to other communities in Nye as well, such as Tonopah and Beatty.

“It’s been our honor to help, with Richard Goldstein and Tom Waters and all the folks that were behind us, it’s been an honor to help and work with the veterans,” Ron said.

As for Goldstein, an original member of the American Veterans Foundation of Pahrump, he kept his comments short and direct. “I just want to thank Butch Borasky, because without him none of this would have happened; and without Ron and Deb, we’d be nowhere,” Goldstein said.

“I want to add that none of this would have been possible without our Nye County commissioners, our county manager and our DA,” Water concluded while the audience applauded.

Commission chairman John Koenig closed out the ceremony. “This was kind of a no-brainer. When I took this job, I promised to support the vets… You guys are at the top of my list because if it wasn’t for you, we wouldn’t be standing here. I thank you for your service,” he said.

As a final note, it was repeated once again that with 11 banners hung as of that morning and a total of 40 double-sided banners available, there was still the opportunity for many more veterans and current military service members to be honored through the Nye County Veterans Banner Program.

Applications for the program can be obtained at the Nye County Administration Office at 2100 E. Walt Williams Drive or online at homelessvetsolutions.com

For more information or assistance with completing an application contact the Wrights at 775-537-4035.