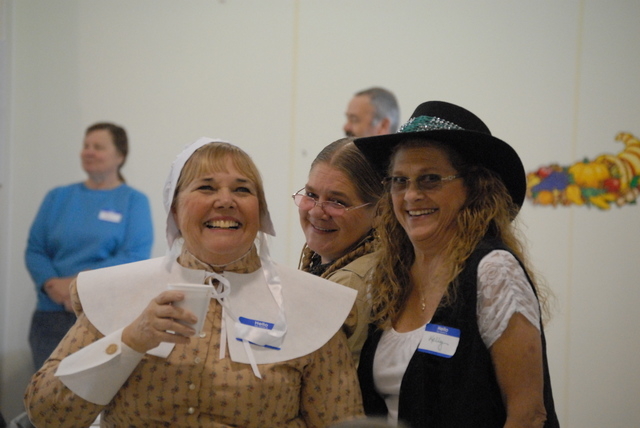 It’s truly amazing how a community like Pahrump can get organized, form committees, assign responsibilities and have everything come together for the annual Thanksgiving dinner. It is always successful and the number of attendees increase every year.

Businesses pull together and pool resources of money and services. If they can’t find what they need, committee members call and knock on doors until they get the job done.

NyE Communities Coalition Holiday Task Force chairman Billy Orem said he moved here in 2001 and that the free Thanksgiving and Christmas dinners were originally just for the homeless. “Back then, we were able to get the meal together through donations and people cooking turkeys at home and taking them to the Bob Ruud Community Center.

“Then we gradually added making those meals open to the less fortunate. Now, it’s open to everyone.”

He said the standards have had to change with the times. “We can’t just do it through donations, we have to buy everything.” He said if someone had to put a price on holding one of the community dinners, it would cost $4,000 to $5,000.

“We live in a fabulous community,” said task force member Paul Miller, who works for Corrections Corporation of America’s Nevada Southern Detention Center. Miller is in charge of the turkeys and getting them cooked.

He said it was a joint effort this year. “Last year we (CCA) bought the turkeys and cooked them in the kitchen facilities here. We can’t do that anymore.”

He said Leo Blondo, owner of Carmello’s Restaurant, is doing some remodeling inside the building and volunteered the use of his ovens for cooking the turkey.

The Pahrump Nugget stepped in and allowed its relationship with Sysco Food Service to order $2,000 worth of turkey. Miller said the turkeys are boneless and all breast meat. “It’s more bang for the buck.”

He said the turkeys were purchased with the help of Desert View Hospital and an anonymous donor as well as CCA and the Nugget.

Orem said the side dishes will be cooked in the kitchen facilities at NyECC.

Masses of volunteers are in place to help in the kitchen, decorate the NyECC multi-purpose room, serve meals, beverages and dessert.

Others will provide security and help with parking. A clean-up crew still needs a few helpers but the home delivery system is in place.

Linda DeMeo is taking information for the homebound and coordinating delivery. “I have 12 drivers so far and over 200 people have already called in for meal delivery. We will take orders for delivery right up to 1 p.m. on Thanksgiving Day,” DeMeo said. But there are limits. She said no more than four meals will be delivered per address. If there are others needing the delivery service, call DeMeo at 775-209-4683 and get those names on her list.

Transportation to the community dinner can be provided if someone is in a wheelchair or is otherwise disabled but would like to attend.

Pahrump Senior Center Transportation Manager Don McIntosh said one of his drivers, Joe Richards, volunteers his time every year to run a shuttle to and from the dinner gathering. The senior center donates the bus. Those needing to use the shuttle can get on that list by calling the senior center at 727-5008 and setting up a time with an address. The shuttle is free.

McIntosh said, “Joe donates his time every year. He will also be running the shuttle for the community Christmas dinner.”

NyECC will also be taking donations of winter jackets and coats for the homeless and less fortunate. Pastor Ron Fairbairn said, “We want to have all sizes available to anyone who needs to keep warm. Winter is coming and we are short on coats.”

Donations are being accepted to “sponsor a plate.” The cost is $10 and checks should be made payable to NyECC and sent to 1020 E. Wilson Road, Pahrump, NV 89048.

With funds tight, the Task Force is seeking donations for the community Christmas dinner.

Linda Wright, who is in charge of volunteer coordination said not only does the coalition need monetary donations, they also need gift cards to local grocery stores. They also need paper products in line with the menu — no Styrofoam plates, please.

Non-perishable foods are also needed for the Christmas dinner as well. That menu will be finalized at a coalition task force meeting Nov. 24. Ham should be on the menu but the task force hasn’t tackled that obstacle yet.

Christmas is a time of giving as well as a good meal and Orem said the organization would like to have businesses step forward with gift certificates for products, restaurant meals and services that can be used for drawings at the community Christmas dinner.

Wright said each of these events attracts between 800 and 1,000 diners to each holiday meal. “That’s a lot of people to feed and we can use the help. Those wanting to volunteer to help the task force for Christmas should call Wright at 775-419-4683.