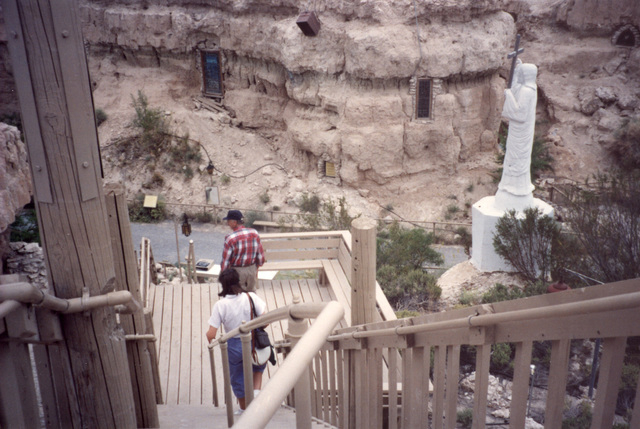 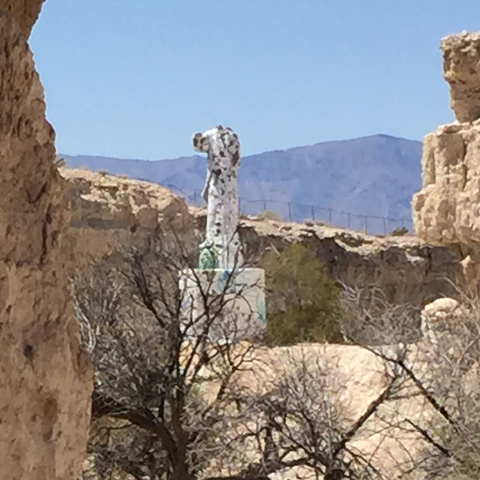 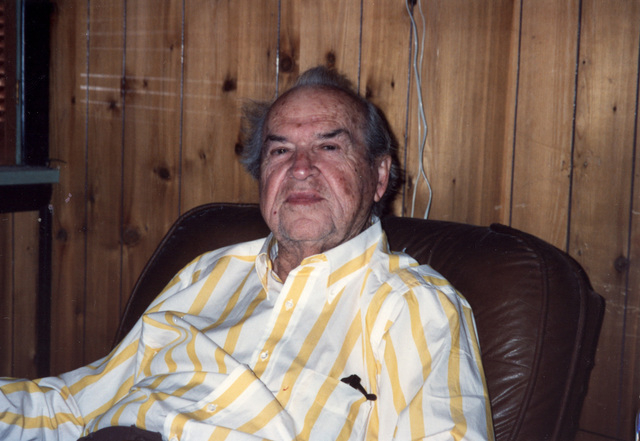 Down a dusty road turnoff on the highway to Tecopa sits a former tourist attraction that has turned into a site for filming underground films and firearm practice.

A headless saint statue represents the very little of what was once Cathedral Canyon, a vision of one man that has been reduced to rubble in the more than 20 years since his passing.

Roland Wiley was born in Iowa in 1904, graduated from the University of Wisconsin and obtained a law degree from George Washington University in Washington, D.C. Following graduation, he worked as a law clerk for a big law firm in Washington for a year. In 1928 he went to Los Angeles to visit family, a life-changing trip.

He heard that Las Vegas was a good place for a professional person to get started so he checked the town out and decided to stay. At the time, Las Vegas’ population was about 4,000 and the road to Los Angeles was not paved.

He was elected Clark County District Attorney in 1938 and served one term.

While district attorney, in 1939 he gave his approval for Tommy Hull to construct the El Rancho, the first gambling resort on what became the Las Vegas Strip.

Roland Wiley made his first trip to Pahrump Valley in 1936. In a 1988 interview I did with him, he recalled that there were three big ranches in the valley then—the Pahrump Ranch, the Manse Ranch, and what he called the Yount Ranch, located at the south end of Pahrump Valley not far from Stump Spring. That property consisted of three homesteads and was occupied by John Yount, son of Joseph and Margaret Yount, founders of the legendary Manse Ranch in the 1870s. John Yount ran about 400 cattle on the ranch, but when feed got low during Prohibition he quit cattle and leased springs on the ranch to moonshiners.

John Yount had been previously married to a woman who had died. He then took up with an Indian woman known as Belle, but they were never formally married.

When John Yount died, Belle hired Roland Wiley to protect any rights she had to the ranch. As it turned out, Belle urged him to buy the ranch and he did.

Paving over Mountain Springs was not completed until 1954. To simplify access to his ranch, in 1941 he constructed an airstrip on his Pahrump property and would fly from Las Vegas to spend weekends there.

In 1972, Roland Wiley began work on what became a passion: Cathedral Canyon. The canyon was located a short distance from his home on what he called the Hidden Hills Ranch. Nature had carved a small, picturesque canyon from the Pahrump Valley floor a couple of city blocks long, 50 to 100 feet wide, and 60 or so feet deep.

Wiley used the canyon as an artist would use his paint brushes and canvases to express his very special view of life and humanity.

He constructed a trail from the canyon’s mouth to its end and placed statues and other works of art along the trail in niches in the cliffs.

Poems, messages, and quotes were framed along the trail. Resting spots with chairs were provided for those who wished to stop and contemplate the beauty of the scene and the meaning of life. A suspension bridge was constructed from one side at the top of the canyon to the other.

The site was wired with electricity so it could be viewed at night. Halfway up the side of the canyon near the bridge stood a twenty-foot statue of Christ.

Cathedral Canyon was a lovely and unique attraction, a presentation of Roland Wiley’s rich and enlightened view of life and humanity. Visitors from around the world enjoyed it free of charge. Roland financed the entire effort for more than twenty years out of his own pocket.

Roland Wiley died in August of 1994. Al Carpenter, a lifelong Pahrump Valley resident and friend of Wiley who lived at the ranch, tried to look after the canyon following Roland’s passing. But it was too much. Roland apparently made no provisions for its protection and maintenance after he was gone.

Over the past 20 years, Roland Wiley’s wonderful creation has been completely destroyed by vandals. Two weeks ago, Arnold Knightly, editor of the Pahrump Valley Times, and I visited Cathedral Canyon and Roland’s home site.

The suspension bridge is gone and all the art and messages destroyed.

The only thing still standing is the badly damaged statue of Christ, absent its head, which has been shot off.

Yet the canyon still receives visitors, though not for Roland Wiley’s purposes. When we were there some folks were filming down in the canyon, and where Roland’s home once stood, some people were target-practicing. Five cars were on site while we were there.

The wanton destruction of Cathedral Canyon clearly raises questions about the fragility of civilization’s higher benefits.