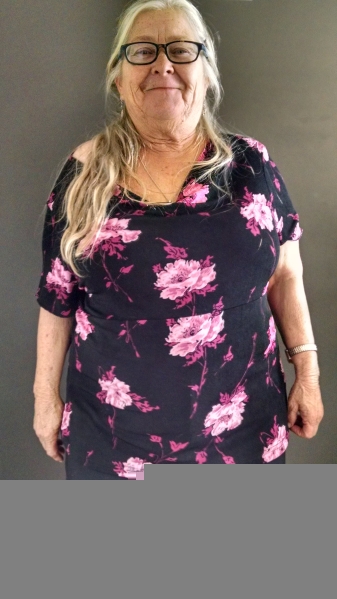 Sometimes the best thing a person can do is not wonder or imagine, not obsess, but have faith that everything will work out for the best.

That’s exactly what Rebecca Lopez, a Pahrump resident, has done her entire life. She was raised to have faith in herself, and faith in a higher power.

“Just believe in yourself and the Lord and great things will come,” the 60-year-old said “You have to have faith, no matter what you’re going through.”

Lopez was born premature in Roswell, New Mexico on April 17, 1955, leaving her with disabilities from birth, including no esophagus pipe and five types of epilepsy.

After being dropped on her head by her biological mother, Lopez said she developed brain injuries, which resulted in her being heavily medicated for the majority of her life.

The odds have never been kind to Lopez, who stands 4 feet, 5 inches. According to the Centers for Disease Control and Prevention, 1 out of 33 babies are born with a birth defect. KidsHealth.org states that 2.5 million people in America have epilepsy, a disorder in which nerve activity in the cell is disturbed, causing seizures.

At about 3 months old, Lopez was adopted by a family in Albuquerque, New Mexico, where she grew up with two sisters, one of which had disabilities as well. Lopez said her adopted father was abusive.

As a child, Lopez was always smaller than other kids and continuously very sick. Lopez repeated the second grade due to being ill most of the year. Not that it mattered much, Lopez enjoyed learning.

“I loved school,” she said. “I never wanted to leave.”

Lopez graduated from Manzano High School in Albuquerque in 1974, after 13 years of schooling.

But while her childhood was marred by abuse, she said she lived in a Christian home and was baptized at eight years old. She prayed to be healed every day of her life.

“Just have faith,” she said.

Lopez explained that she found out that she was adopted as a child when she was rifling through her parents’ filing cabinet. She said her adopted parents had told her that her biological mother could not take care of her with her disabilities, and that she loved her very much.

Once her mother became ill, Lopez lived in a group home in Albuquerque, living there until it closed and then later went to Las Vegas to live in another group home.

Lopez said that her parents abandoned her there and went to stay with some family that lived in Canada.

According to Lopez, she has never driven a car before, and that she would walk everywhere. Lopez mentioned that she had never hitchhiked either, Lopez either got rides from friends or took a cab if she absolutely could not walk.

During her years in Las Vegas, she met her husband, Joseph, who moved her to Pahrump. Lopez, who was 39 when she got married, said that her husband was abusive throughout their entire 19-year marriage, which left her with many scars and bruises.

But she felt she could not leave him.

“That’s what everyone else did to him and he was sick,” said Lopez of her husband, who died of cancer six years ago. “I had to stay and that’s what I did. I stayed until the end.”

After her husband’s death, she claims she was sexually assaulted by a neighbor who had a wife and children. Lopez said that the man who assaulted her has been in prison for four years now and still has six years left on his sentence.

Shortly after the attack, Lopez had a nervous breakdown and was hospitalized for a week.

When Lopez was 58 years old she was taken off all medication, much of it she had been on for decades.

Lopez had been on heavy medication for her whole life and finally she was healed.

“My life was hopeless, then the Lord healed me and now it’s worthwhile,” Lopez said.

Lopez is very involved in her church, Faith Fellowship. Lopez attends bible study during the week and services on the weekends. She volunteers at Symphony Animal Foundation and works with the Cancer Center and No to Abuse.

Never feeling better, Lopez said she feels more alive and that she can do more with her life than she has been able to do before.