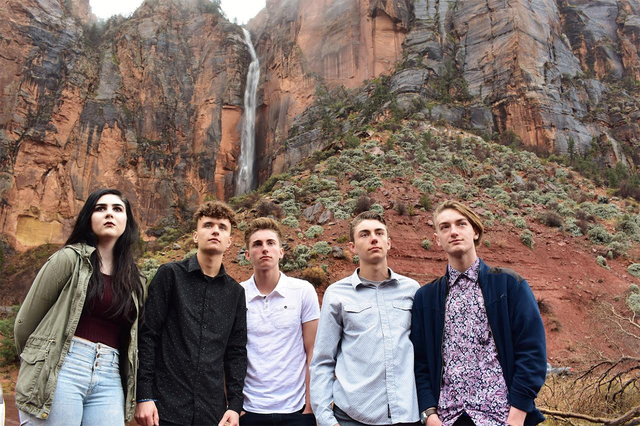 Tower of Cards’ Brooklyn Thomassian, Ryan Ogle, Willie Lucas, Garrett Lucas and Adrian Grimaud will take the stage at the House of Blues tonight at 8 p.m. Special to the Pahrump Valley Times

A local band is reaching new heights as they set to perform once again at the House of Blues in Las Vegas on Friday.

Tower of Cards consists of Adrian Grimaud and Garrett Lucas on guitar and vocals, Ryan Ogle on drums, Brooklyn Thomassian on vocals and William (Willie) Lucas on bass.

Friday’s performance will mark the second time Tower of Cards was invited to play at the world-renowned House of Blues venue.

They learned of the invite just prior to leaving Pahrump for a festival in Utah.

Their music, according to manager Callie Lucas, is best described as rock and pop.

“The band was asked if they could do a fill-in,” Lucas said. “The fill-in slot just happened to be back on the stage of House of Blues, but this time they are performing a full set during prime time. They will be doing a 45-minute set right at 8 p.m., on the main stage.”

“All of the performers are gathered from prominent theater, concert venues and musical shows across the Las Vegas Strip to recreate some of our favorite tunes,” Lucas said. “This particular show’s theme is “We Will Rock You, The Best of Queen.”

Tower of Cards was established back in 2013 as a cover band playing a talent show at Rosemary Clarke Middle School, under the name Final Operation.

Roughly four years later, Tower of Cards’ time, dedication and hard work appears to be paying off in spades.

Lucas said much has changed since their inception, as the band is scheduled to release a full album of original material, recorded during the summer.

“The upcoming release is entitled ‘Waiting on a Miracle’,” she said. “The music was all professionally recorded and a music video is about to be unleashed. We’ve been filming in southern Utah with a professional from Las Vegas. It is going to be really neat, with airplanes, fire and puppies, you’ll see.”

Back in 2015, Tower of Cards won a contest which put the band on stage at the House of Blues for the first time as part of the Bringin’ Down the House Showcase.

The opportunity also earned them the ability of spending several weekends taking part in classes with music industry professionals on the top floor of Mandalay Bay’s Foundation Room.

Recorded in the summer of 2016 and January 2017, “Waiting on a Miracle” is on pre-sale on the band’s website, www.towerofcardsband.com.

The album will be officially released this spring.

“With influences such as Plain White T’s, Seether, Green Day, Coldplay, Blink 182, all the way up to the legendary Allman Brothers and Lynyrd Skynyrd,” Lucas said. “This determined group of Pahrump teens, ages 15 through 17, have found a great sound and they are not afraid to be themselves and through their music, they reveal their best qualities and sometimes their worst qualities too.”

Tower of Cards’ first professional YouTube music video is scheduled for release in the next few weeks, featuring the pop-rock tunes entitled “Let Me Be,” and the hard-rocking song, “Step Back.”

“You are sure to find several songs on this album that will get stuck in your head and leaving you craving more from Tower of Cards,” Lucas said. “You can count on more is sure to come from this band.”