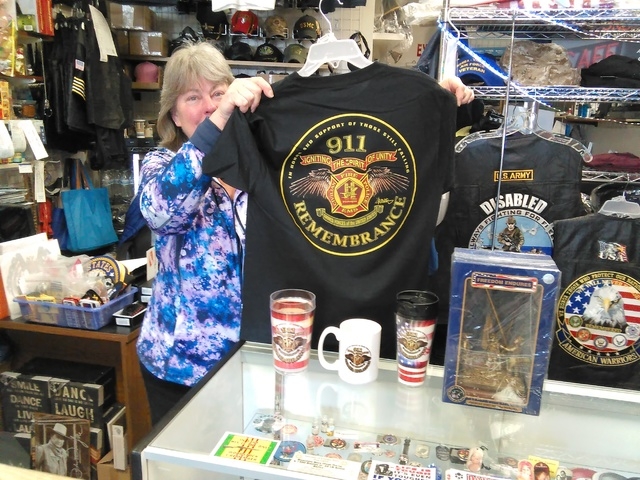 The owners of a Pahrump business are preparing to put on an awe-inspiring Sept. 11 observance later this year.

George and Cindi Vroenen of G.I. USA want the community to participate in breaking the Guinness Book of World Records, by having residents assemble in the parking lot while holding glow sticks in tribute to the twin towers.

Cindi Vroenen said the event will be a solemn observance to those who lost their lives in the terror attack, which took place 15 years ago.

She envisions participants standing shoulder to shoulder, in columns, while holding the glow sticks aloft.

The idea was the result of a brainstorming session between she and her husband, and Pahrump Valley High School’s JROTC instructor, Lt. Col. Patrick Nary.

She noted, to her knowledge, the attempt will be a first for Americans.

“Many things have been erected out of glow sticks in the Guinness Book of World Records and I believe the record right now is 2,800. We are shooting for three to 4,000 glow sticks.”

Vroenen noted that she’s hoping other area businesses and organizations will participate.

“Because this is such a massive undertaking, we need to start organizing this early,” she said. “Down the center, it will say, ‘never forget’ in the glow sticks. The amount of people holding the glow sticks will determine whether we break the record.”

Along with the attempt, Vroenen said there will be prayer vigils.

“I don’t expect this event to take more than half an hour from start to finish,” she said. “It’s going to be a tough one because it’s a Sunday night. It’s not like we can move it, because it’s 9/11. We also hope kids and teenagers will take part in this. It’s hard to believe that it’s been 15 years since that tragic day. I think all of us remember exactly where we were on 9/11/2001.”

As native New Yorkers, the Vroenens noted there are several first responders now residing in the Pahrump Valley.

Vroenen is now reaching out to businesses and organizations who may want to take part in the attempt.

She said several business owners have already offered to contribute.

Gaining entry into the Guinness Book of World Records is not an easy feat in terms of accomplishment and cost, as the application process is expensive.

“The last time we checked, it was $900, which is the lower end,” she said. “If we wanted to have a Guinness Book of World Records official come out to observe, that’s more than $8,000.”

In the days leading up to the event, Vroenen said she plans to contact area news outlets for coverage.

Additionally, Vroenen said even though the observance will serve as a time for reflection, there will be several offerings for some of the attendees.

“Everyone who helps make history will get a free raffle ticket and be eligible,” she said, “There will be no fundraising at this function. There will be a couple of speakers for this solemn event, Pastor Ron Fairbairn will be here as well and conducting a prayer.”