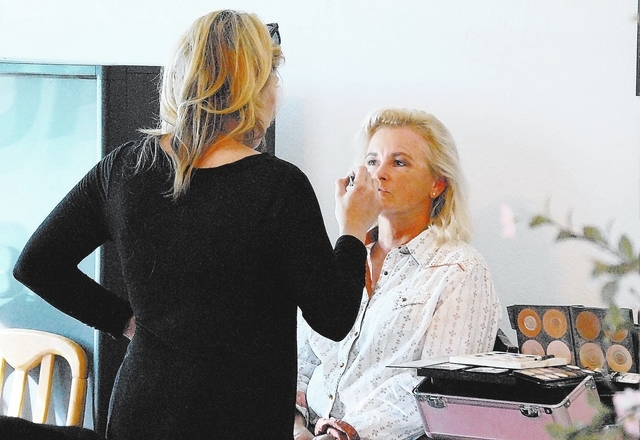 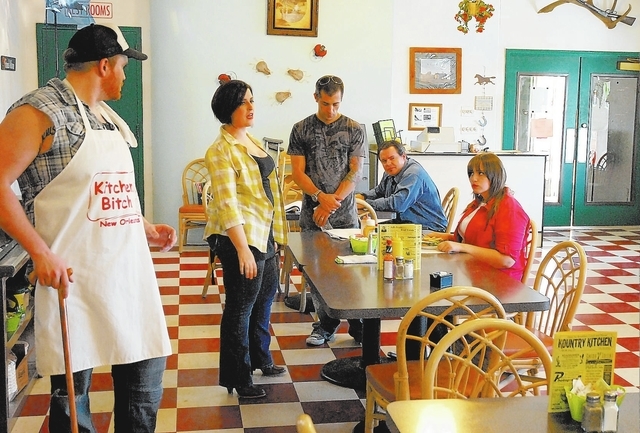 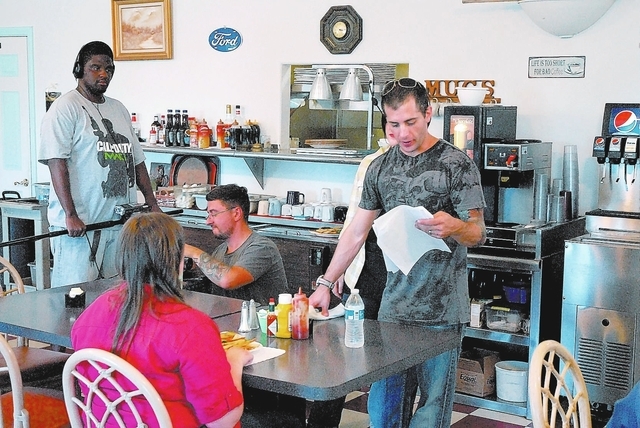 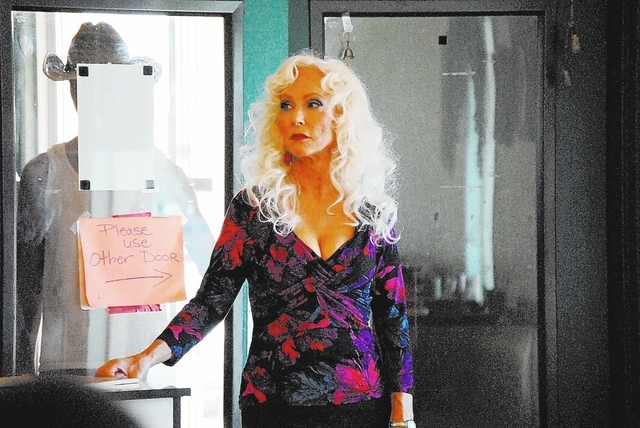 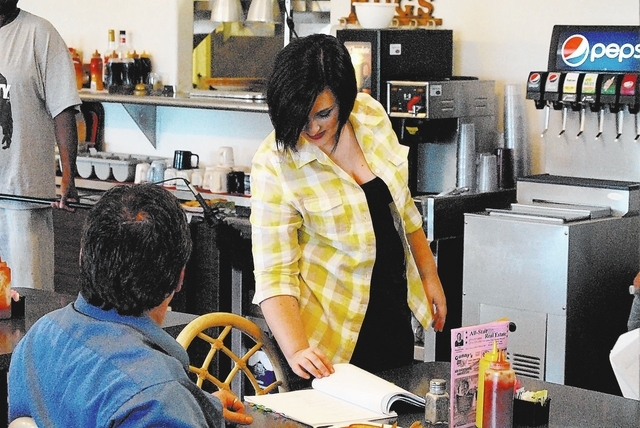 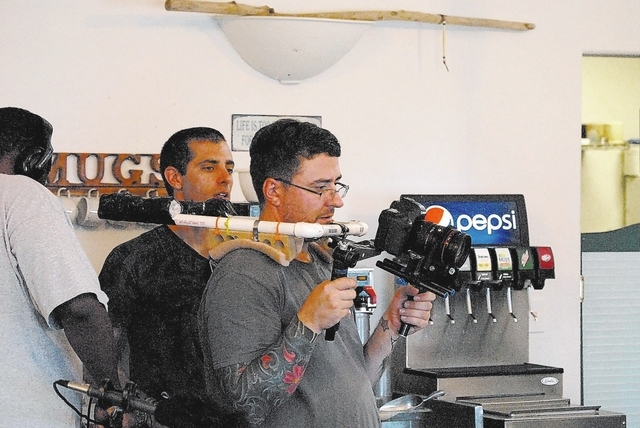 There is a secret organization in Pahrump modifying humans in town and turning people into monsters. The organization uses local residents to experiment. No, they have not infected the town board yet, and no, this is not really happening. It’s just another film production company in town making a movie.

Last year it was the horror of James Horton, who spent about a year shooting in and around Pahrump for his movie “Do Not Disturb.” Horton wrapped it up late last year. Now, another movie production company, House of Don, based in Las Vegas, is filming here. The movie called “Finding the Truth,” is being shot throughout Pahrump. Some people may have noticed them shooting the last couple of weeks at the Horizon Market and the Kountry Kitchen, next to Who’s Dunes, on Highway 372.

Douglas Farra is the movie’s producer, writer and director. He said the film emulates the style of director Robert Rodriquez and Quentin Tarantino, who specialize in gore and shock value. When asked if there was a message the film was trying to convey, Farra replied, “There is nothing serious about this movie. The movie is written so loose that half the stuff that happens is just for entertainment value.”

Farra gave a brief synopsis, without giving the ending away. He said the movie is about a small underground group of people who modify human beings into different things. He didn’t explain what constitutes “things.” The modified human beings never know they have been altered. They are modified by a mechanism, which is operated by remote control. When it is turned on they take on an altered state. What they turn into is being kept a secret.

Farra said the main character is being played by actress Corey Taylor. For reasons unknown, she goes through her father’s belongings only to find he is the mastermind behind the human experiments. Actor Stu Chaiken plays Taylor’s father. She takes the found materials and documentation to a small town, which becomes the supply of targets to be modified. She also steals Dad’s backpack full of evidence and running scared, he sends a bunch of henchmen to retrieve his daughter and his belongings before she exposes him.

Farra said, “It goes a little deeper than that and other people are involved that you don’t think are involved. It was originally written as a short film, and it was going to be combined with another film, kind of like in the Grind House style. The other film dropped out, so I had all these additional side stories for certain characters and now I am just going to inject all these side stories into the script. Half the stuff in the movie is just for entertainment value and has no bearing on the story.”

Farra is using many local actors from Las Vegas and one from Pahrump. By coincidence, Victoria Cameron, Stu Chaiken, Barrie Berry, Gail Clampit and Marilyn Weinmann were all actors in the movie “Do not Disturb.” Clampit is the only actor from Pahrump.

In the movie she plays Feona, an assassin. In this movie, she will be doing a lot of stunts and fighting. Her last role was a lot more feminine.

“I asked to do my own stunts, so I will be doing my own stunts during the film. I have been training for months for this role. I do a little Muay Thai and tumbling and I have done some limited gun training.”

Cameron said she did this film to broaden her base for future roles.

“The hardest part will be handling the knives. I have never been trained in knives — the whole reason for doing a movie like this is to show other directors how versatile you are,” she said.

Farra has confidence in Cameron and her physical abilities to get the job done.

“Victoria has got the most stunt work of anybody. She will be doing a big battle scene in the movie, and she is the main focus in that battle scene. So, she has to go through several characters with fight choreography stunts and special effects,” Farra said.

In the film, Cameron enjoys working with co-stars from her last movie, which was shot throughout Southern Nevada. “I really felt the cast of “Do Not Disturb” was like a close-knit family, so I am really excited to be filming with some of those stars,” she said.

The movie came to Pahrump because Clampit is a resident and was able to convince Farra to check out the town as a possible fiming location.

“I had a few other towns on my list. I was going to check out Beatty and Logandale, but because Gail Clampit is in our cast, she lives in Pahrump, and started telling me about some locations there,” he said.

“Pahrump is very hospitable. Other locations are asking for money and this a burden on small companies. You try to find places in Las Vegas and they want big money. We filmed at Horizon Market and they said just come on down. Everyone in Pahrump just said come on down.”

Clampit’s role is the wife of Sheriff Bob, played by Colin Ward. In reality, she is retired Las Vegas Metro police officer with acting experience prior to her law enforcement career. She has worked with Channel 10 in Las Vegas, and worked makeup on the Bill Cosby Show and the Bob Newhart Show.

“I was from Pahrump and they were excited about that. I showed them around for production locations. He (Farrar) wanted to get a place with dynamic scenery, so we went to Stagestop. He liked the outside of the bar,” Clampit said. She believes it is good for the businesses here to get a film credit so other production companies will use Pahrump as a filming location.

Farra said Hollywood has turned away from doing a lot of blockbuster films and is turning more toward low-budget productions. He points to “Paranormal Activity,” which he said was completed on a budget of $10,000. The trend gives him confidence his movie will be viewed by Hollywood.

“We want to do the film festival circuit and Hollywood does send out scouts. We start getting good reviews, it will encourage us to submit to more festivals,” he said.

Farra plans to finish the film in April.