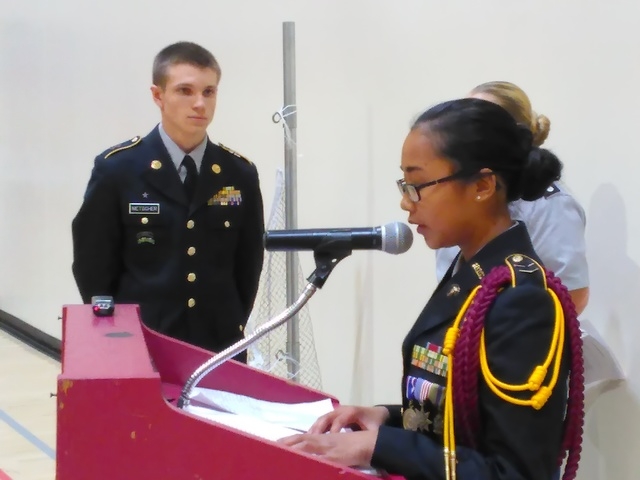 The time-honored Change of Command is a military tradition representing a formal transfer of authority and responsibility from one commanding officer to another.

The passing of colors and standards, to an incoming commander, ensures that the unit and its soldiers are never without official leadership.

On Wednesday, cadets from Pahrump Valley High School’s JROTC program carried out the ritual along with the pageantry that goes with it.

‘Under the command of Cadet Lieutenant Colonel Descuatan, this battalion has continued in the right direction,” he said. “She has learned how to command and to delegate. Today, we say farewell and thank you for your leadership. We also say farewell to our seniors, who will be moving on.”

Conversely, Nary also addressed the responsibilities incoming commander Metscher will assume this fall.

“He has been an integral part of this year’s leadership and will take what he has learned this year to improve and lead the battalion next year,” Nary said. “The most important lesson I hope he has learned is the need for communication. We expect great things from him and the senior class of 2017. Cadet Metscher, the reins are yours, take command.”

Following the ceremony, Metscher said the new position comes with many responsibilities.

As for Descuatan, she will undergo basic training at Fort Sill in Oklahoma later this year, where she also plans to earn a college degree.

“I am hoping to get my master’s degree paid for and it’s going to be in nursing,” she said. “My time here in the program has been really, really good. The JROTC program has helped me become a better leader. I want to thank the colonel and Sgt. Smith for everything they’ve done and all the sacrifices they have made to get this battalion going.”

Nary meanwhile, spoke about how the program fared throughout the school year.

Each cadet signed a contract committing themselves to servicing their school and the community at large.

“The accomplishments this year include over 1000-plus volunteer hours just in ROTC, while many of our cadets have outside hours as well,” he said. “This year saw over 35 Color Guard performances around Pahrump, three parades and numerous events that the cadets volunteered for. We also raised over $9,000 for the program with $1,600 coming in just this week from the Elks Club to buy black and white socks and dress shirts for the program.”

Nary also spoke about the future of several of the graduating cadet seniors in the program.

“One will go to West Point Military Academy, and one to the University of Washington with a full-ride Navy ROTC scholarship. Four cadets will go in active duty in the Army and Navy and two will go to the National Guard to assist them with their continuing education. Four others will go to universities to pursue their dreams. This year has been a busy one for the seniors as well as the rest of the cadets.”