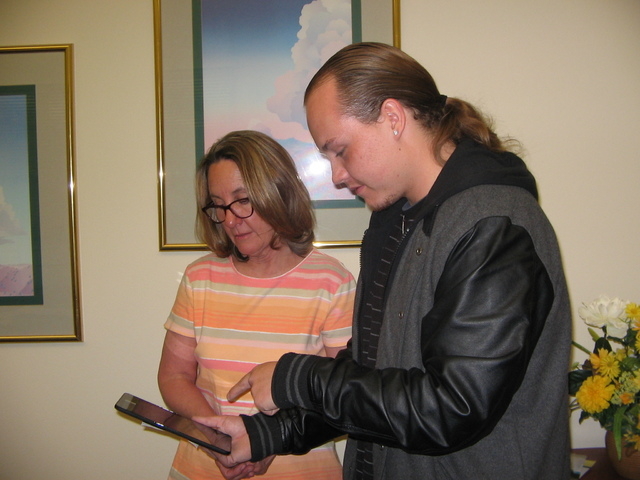 A joint venture between the Pahrump Community Library and the Amargosa Valley Library means added e-book options for cardholders anytime at any place.

Pahrump Community Library Director Susan Wonderly says the partnership is beneficial for both libraries to keep costs down through use of the OverDrive app.

“By joining a consortium with Amargosa Library, we were able to use OverDrive and purchase OverDrive e-books,” Wonderly said. “Otherwise, they do not just let stand alone do it.”

Leslie Scott, Director of the Amargosa Valley Library, said they have offered e-books at their location for almost two years. Audiobooks and e-books are convenient for their community since it is so spread out and there are limited hours at the library.

“OverDrive has an amazing selection of e-books as well as video streaming capabilities,” Scott said. “So our other vendor, while they do have a good selection, is a little bit more limited.”

Both libraries save some money by sharing the OverDrive website and in purchasing new titles. Fees for utilizing and maintaining the website are based on population. Scott says her library pays $500 a year for the service and e-book prices can vary depending on the publisher and time frame for which a book will be in circulation.

If e-books are purchased to be used forever, prices can range from $20 to $40 up to $80 to $90 for a one-year term depending on the publisher. Scott says there is no duplication in buying new books since both libraries coordinate which titles to add to their listings.

Both libraries hope to buy new ones every month.

“It’s one user, one copy,” Scott said. “So we buy one copy of ‘Gone Girl,’ for example, we have one copy available. So, if you’re in Pahrump and you downloaded it, then someone in Amargosa can get it next. They just cannot download it at the same time.”

Wonderly said Pahrump has budgeted $6,000 a year to spend on the e-book program. Accessing the e-book service is free. However, a person must have a library card to log on to the website for the e-book.

Justus Attanasio, a reference aide at the Pahrump Community Library, said the OverDrive app is user-friendly.

“One Click Digital was really popular, but as soon as we got OverDrive, more people know of it,” Attanasio said. “It is more widely used. So, people are jumping for OverDrive. They know how to use it. Clark County uses OverDrive. A bunch of places use OverDrive.”

According to OverDrive’s website, more than 30,000 libraries in 40-plus countries us the service, which offers a catalog of more than 2 million e-books, audiobooks, and videos.

Similar to traditional books, Wonderly says e-books can be “checked out” for two weeks and then renewed.

“After two weeks, after the original check out date, it just disintegrates,” Wonderly said. “It’s gone from your mobile device. So, it basically comes back to the library for someone else to check-out. So, it’s never overdue.”

The library is not losing money by not collecting overdue fines, according to Wonderly. They probably lose more money from patrons who don’t return regular books at all.

Attanasio is available to help someone who needs help navigating around the Silver Star e-library found on the library website. He has already assisted retirees in setting up One Click Digital or OverDrive access.

“Kindles are really popular nowadays, especially because people, grandkids, are trying to get their grandparents into technology, buying them a Kindle because everybody wants to go digital,” he said.

Despite all the new technology for book lovers, Wonderly and Attanusio agree that hardcover books will never go out of style. People are still checking them out too.

“The rumors that libraries are going to die; they’re not going to die,” Wonderly said. “We just keep adapting by the technology.”

For more information on the Silver Star eLibrary visit www.pahrumplibrary.com or www.amargosalibrary.com.