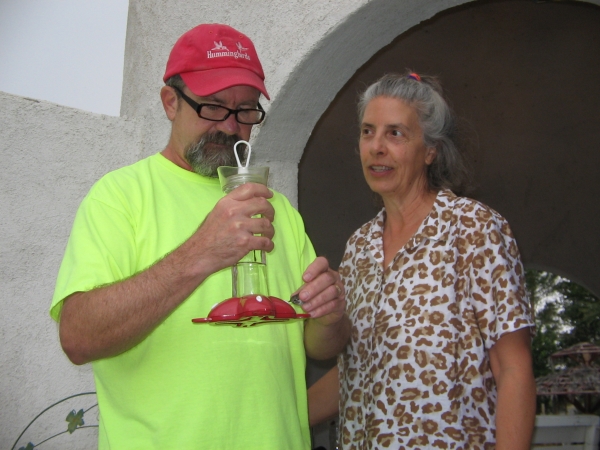 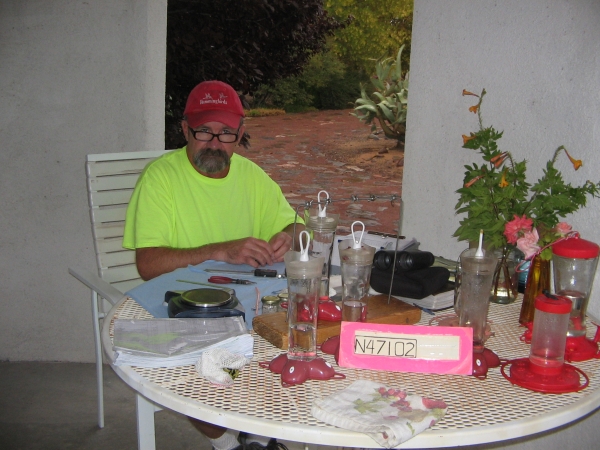 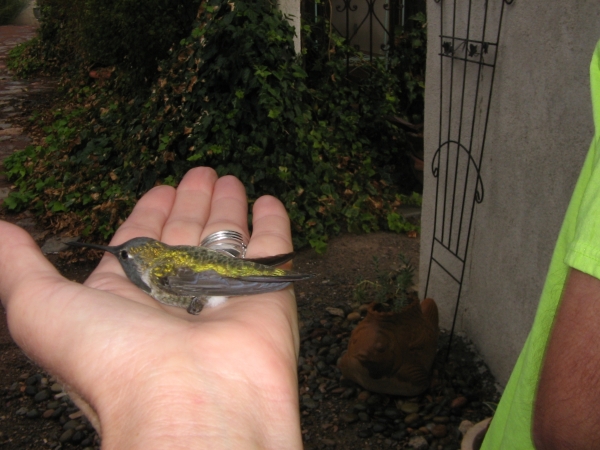 Some jobs are made out of passion.

Ned and Gigi Batchelder’s love is for hummingbirds, so much so that they research the unique little birds locally for U.S. Fish and Wildlife as full-time, self-funded volunteers.

“We do it because we love hummingbirds,” Gigi Batchelder said. “Just to learn. We’re learning so much about hummingbirds.” As full-time volunteers, the couple is banding, tracking and researching the breeding and migrating habits of hummingbirds.

The Batchelders have both been interested in birds since they were kids. He used to climb trees to check out their colors, nests and eggs. After they got married, their love of the species continued to grow.

“We started getting bird goofy at a young age, I guess you might say,” Ned Batchelder said.

In the 90’s, they got serious and scientific about their hobby and started as volunteers with the Hummer/Bird Study Group off the Gulf Coast of Alabama. They helped with conducting surveys, research and the banding of about 80 -100 different species of birds every spring and fall, which further piqued their interest in bird science.

Ned Batchelder became trained, federally permitted and state licensed to capture and band hummingbirds. A federal permit is required to band any species of birds, but a special one is needed for hummingbirds since they are small and not studied as much as other birds.

Working in Oklahoma as a technician with tools and instruments in the oil and gas industry helped him develop precise finger dexterity in handling the tiny creatures.

Gigi Batchelder does not band, but helps capture the birds and assists with recording and submitting data to state and federal agencies that is required annually.

Hummingbirds had never formally been studied in Nevada until 2007 when the Batchelders left Montana in the winter and found themselves “hummerless.”

And it’s not just in the Pahrump area that they have banded the little birds. They’ve also worked in Boulder City, Las Vegas and St. George, Utah.

Currently, they are conducting a two-year study in Pahrump through a network of banding stations and sugar water feeders set up in private backyards. This allows for tracking the “hummers” at 20-30 sites instead of one central location.

Ned Batchelder said much data can be gathered from the banding of birds.

“That’s what this is all about, the understanding of conservation and bird preservation and longevity and breeding dates, and it comes generally from bird banding,” he said.

He explained that it’s a wonderful science that takes a lot of dedication, electronic work, record-keeping and lots of patience.

As part of the banding process, the hummers are attracted to cages with sugar water feeders and then removed by the caring hands of the researchers.

Ned Batchelder said it takes about 2-3 minutes to band the leg, verify sex, age, species, measure wings, bills and tails and perform a quick health check. Females are examined to see if they are carrying an egg. The birds are offered a drink and then released.

He said they’ve never lost a bird during the process.

“Our training is to notice and be aware of any stress sign of birds,” he said. “We’ve been around a hundred different bird species banding. The stress signs, when you notice them, you just immediately let the bird go.”

Some are repeat visitors to the banding station, but each bird is only counted once and documented for the records.

All that information is recorded in the data base in Laurel, Maryland. If anyone ever finds a banded bird, whether a game bird, or one that hit a window, or a car, the band number can be reported. The history of the bird can be traced, including where and when it was banded.

Overall, 1.2 million birds, all species, are banded every year in the United States. There are close to 900 species in North America.

Thirty thousand of these bandings are on hummingbirds, which the Batchelders stake a claim to doing about 10 percent of them.

According to the Batchelders, the 320 species of hummingbirds are only found in the Americas with six to eight in the West.

So far, they’ve banded well over 2,000 hummingbirds here in Pahrump since they started in March. Another 1,300 were banded in Mesquite, their home base.

Two species, the Anna and the Costa, can been seen in Pahrump year-round.

The Costas start breeding in January, according to published researchers, but the Batchelders have proven they breed in October, November and December in Mesquite.

Beginning in March, more species will be seen at feeders and heard humming in yards. The Black-chinned arrives after spending the winter in the central part of Mexico. They breed from Arizona to British Columbia.

Two other species, the Rufous and Calliope, may be spotted migrating through here in the spring, since they breed in western Canada and the northwestern states.

The Broad-tailed will breed up on Mt. Charleston above 5,000 feet, but on rare occasions may be seen in the lower Pahrump Valley.

If you have a feeder in your yard or plan to get some, there are specific plants and flowers that attract hummingbirds such as coral honeysuckle, trumpet creeper, bee balm and others. The University of Nevada Cooperative Extension office has a complete list.

“There are feeders that are beautiful to the human eye that I would pick, but the hummingbirds will not go to them,” Gigi Batchelder said. “It’s the mechanics of sitting on the perch and feeding.”

They recommend a glass feeder called Rose Petal sold online at HomeDepot.com. Feeders should be placed out of the sun and hung at eye level in a tree or shrub. The liquid sucrose mixture should be changed every three to four days or it will ferment and go bad.

The sugar-water mixture is very similar to flower nectar, which is about 30 percent sucrose. Only white granulated sugar should be used in a 4-1 ratio with water (four cups water to one cup sugar).

There are a lot of myths about hummingbirds. The sugar water is not their only source of food; it is just quick energy for the birds to eat and catch insects. The Batchelders said many people don’t realize that hummingbirds eat insects to get proteins, vitamins and minerals to produce eggs.

Gigi Batchelder added that hummingbirds are not dependent on these feeders at all. If you didn’t have a feeder out, or it freezes, or you go on vacation, the birds will do just fine.

Since the Annas and Costas are here all year, feeders do not need to be removed in the winter.

Another myth the Batchelders want to dispel is that hummingbirds “hitch” rides on the backs of geese to migrate to Mexico. Simply not true, even though some people claim to have photos of this feat.

A book on their research may be in the wings, but not in the near future.

“When we get in a rocking chair, we’ll probably write a book,” Ned Batchelder said laughing.

The Batchelders are extremely grateful to the residents who have offered their properties for this research. Many are part of the Master Gardeners program sponsored by the University of Nevada Cooperative Extension office and members of the Red Rock Audubon Society.

Debby Woodland, 4-H and Master Gardener coordinator, has several feeders in her yard, along with some on the grounds of the cooperative extension office.

Anyone interested in learning more about which plants and flowers will attract hummingbirds to their yard, or helping the Batchelders with their research by setting up feeders, can contact the University of Nevada Cooperative Extension office, 1651 E. Calvada Blvd. at 775-727-5532.

They also have a banding video posted on the Pahrump Master Gardeners Facebook page.

“We’re just addicted to it, really,” Gigi Batchelder said. “I can’t imagine doing anything else.”

They weigh between 3-to-5 grams, similar to a penny or nickel;

Movement of the wings create the “humming” sound;

Respiration rate is 200 breaths per minute.