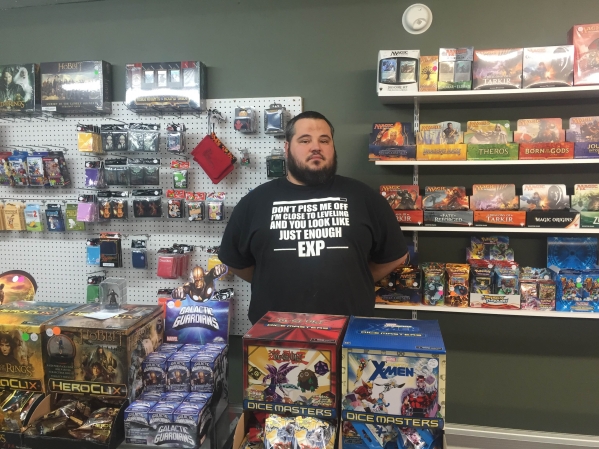 After losing his job and finding it tough to land a new position, one local man took the matter into his own hands and started up his own business.

An avid participant in the trading card games, “Magic: The Gathering” and “Dungeon and Dragons” for much of his life, Willis saw the opportunity to start up his own store geared toward the popular fantasy games.

“I was unemployed at the beginning of the year after being laid off from my job and I couldn’t find anything,” he said. “So instead of going through the hassle of trying to find a job, I just went and decided to open my own business and create my own job.”

Willis, a 20-year resident of Pahrump, had the idea about the store for some time and after similar stores came and went over the years in the valley he thought it was time to bring his idea to fruition.

“I wanted to bring something to town that I know a lot of people are looking for,” he said.

With the other similar businesses that were around, Willis said they treated their stores more like a hangout, so that hurt their business. Willis plans to run his shop like a true business to avoid the pitfalls other owners fell victim to.

Willis said he hopes to have a place where children can come and do something positive after school to help keep them out of trouble. To entice them, Willis holds Magic tournaments on Fridays and is looking to make his events more meaningful by adding the company that puts out the game’s backing to the contests.

“I’m looking to get sanctioned with Magic, so that we can hold tournaments that can earn them entry into the big tournaments around the country,” Willis said.

Adventurer’s Rest was welcomed into the Pahrump Valley Chamber of Commerce last month with a ribbon-cutting ceremony. Being added to the chamber is something Willis is proud of.

Willis knows that you can’t try and go up against businesses over the hump, so he’s going to try and keep things with Pahrump residents in mind.

“I know I can’t compete with Las Vegas prices,” he said. “We’re not Las Vegas and I cannot charge the way Vegas does. I want to be the most affordable that I can, primarily taking care of my customers.

“If I take care of them first and foremost, I know they’ll be back.”