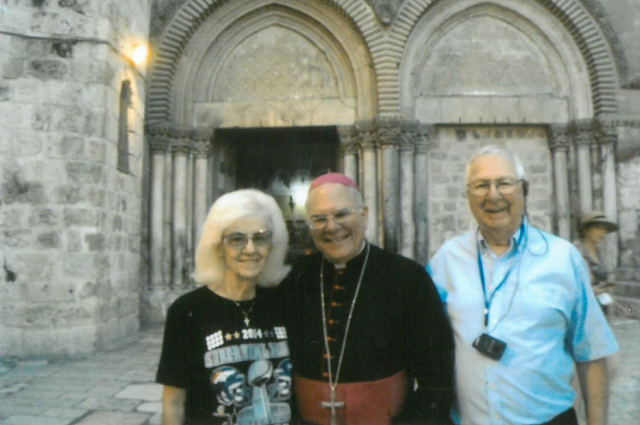 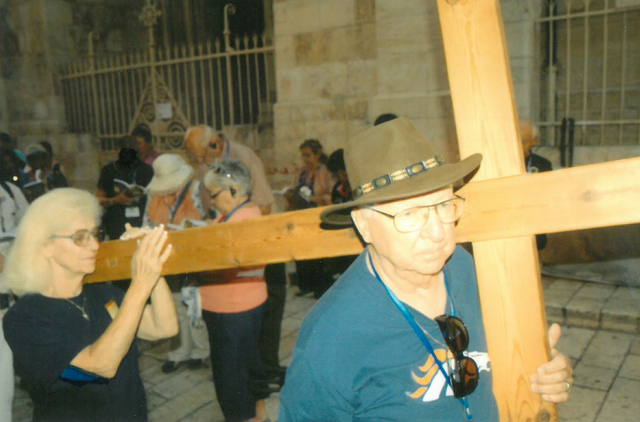 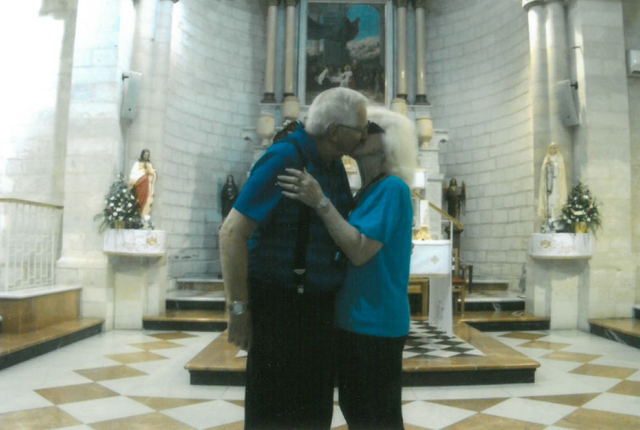 Pahrump residents Regina Joerger and husband Val Scherer recently took the trip of a lifetime to the Holy Land where they visited Petra Jordan, Jerusalem, and Galilee in Israel in September.

Joerger and Scherer attend the Roman Catholic Church, Our Lady of the Valley in Pahrump. The couple went on the pilgrimage called the “The footsteps of Jesus” and it was led by the Bishop of Las Vegas, Joseph A. Pepe. The two had signed up for this tour through Catholic Charities. There were 35 others from Las Vegas and California who joined them on this pilgrimage.

For the couple, it wasn’t just a vacation, but it was a spiritual journey that had added benefits.

Joerger said the trip not only lifted her spirits, but it also helped cure her ailments.

“The trip was filled with spirituality and emotions as I got to walk the actual steps of Jesus’s life,” Joerger said. “Before I left I had swollen ankles and had been in a walker for five months. The doctors had no idea what caused my problems. They did tests and everything. Believe it or not, when I returned, my ankles were fine and I no longer needed the walker.”

Scherer said she was in the walker the whole trip, and when she got home she could walk normally.

“We got home and the swelling was completely gone. It had to be divine intervention,” he said.

Of course Joerger had no idea that she would be cured by walking in the footsteps of Jesus. She went because she is a devout Catholic who enjoys praying the rosary every day and she just wanted to see the places that are in the rosary meditations (a Catholic way of praying).

In other words, she was on the trip to experience what Jesus experienced and not to just merely enjoy herself.

After a long flight the group landed in Tel Aviv, Israel, where they were greeted by the group’s guides.

“We were greeted by some wonderful people who welcomed us with big smiles,” she said. “It made the lines at customs bearable as well as the outside heat of 110 degrees. Being from the west, we were familiar with those temperatures.”

Of course the bus transportation was a relief to the group, which was first class. It was a fully air-conditioned tour bus throughout the trip and was large, roomy, clean and comfortable.

The bus came with an experienced driver and a fantastic tour guide. And a big plus was everyone on the tour spoke English.

“The bus was nice,” Joerger said. “It had a bathroom and seats larger than an airplane. One big difference from a regular tour and a pilgrimage is the prayers. We got on the bus and the bishop led us in prayer. We then went to our hotel, which was nice and clean and had excellent food.”

The guides on the trip were first-rate.

“As we traveled through the country, our tour guide was Maher. He was great and knew his regions and religion very well. He even sang psalms very well,” she said.

It seemed that every city and place the group visited had a church built over it.

Being a Catholic group, the Bishop was able to say mass daily and the group attended and received communion every day.

The trip went through all the major events of Jesus’s life from birth to death.

The pilgrimage started with sites associated with the birth of Jesus.

The trip followed scripture and one of the most moving aspects of the journey was the place where the Wedding Feast at Cana took place. This is where Jesus changed water into wine at his mother’s request. The whole group renewed their wedding vows here with Bishop Pepe.

“One of the happier moments of the trip was when we all renewed our wedding vows together,” she said. “It was the church wedding we always wanted. After this we felt stressed out and strained. It was as if we were there and we could actually feel his passion. It just wiped you out, the tears flowed, and it was so touching.”

Scherer said it was not uncommon on the trip to see grown men weeping. For him, he remembers weeping at the place Jesus was crucified and at his tomb.

“The tomb was very inspiring. Also many men just broke down where Jesus carried his cross. At these places you just found yourself thinking of Christ and what he went through,” he said.

Another part that Scherer enjoyed was visiting the place where Jesus was baptized by John the Baptist on the River Jordan.

“It was a five-mile walk and it showed what Jesus had to go through and what he confronted,” Scherer said.

His wife said she had difficulty walking the five miles, but did it without complaining because she said she was there for Jesus and not to enjoy herself. Joerger just remembered how hot it was near the river.

The couple enjoyed every minute of the pilgrimage and just wanted to share their journey with others.

“I wanted to share so much of this trip with people,” Joerger said, filled with emotion.” It has taken us a while to get back to normal with all the sneezing, allergies, tiredness, and jet lag you get, but mostly the drained feelings we encountered from this unforgettable blessed pilgrimage.”

During her trip to the Holy Land Joerger never feared for her safety.

“This might sound strange but we actually felt safer there than here,” she said. “While we were over there we saw and watched how all the people practiced their religious beliefs openly, with no interference. They also kept all the grounds where Jesus walked sacred. This is our God, his footsteps, and they preserved it for us.”